Nissan has said it'll decide by the end of the year whether to build its new SUV model at Britain's Sunderland facility. The carmaker wants guarantees from Downing Street that Brexit will not harm its investment. 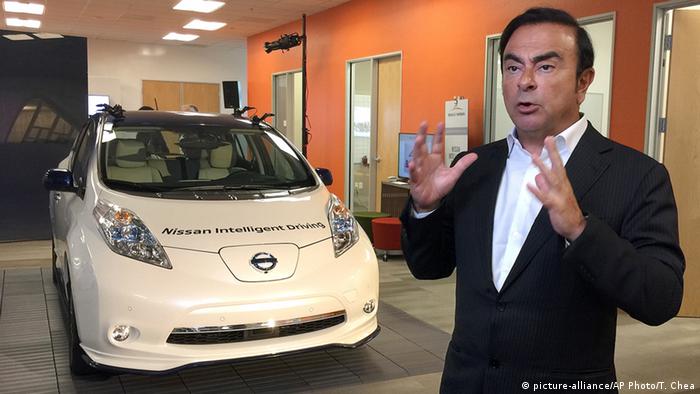 Just weeks after telling the UK that he could scrap new investment unless he got a guarantee of compensation for Brexit-related costs, Nissan CEO Carlos Ghosn (pictured above) on Friday met British Prime Minister Theresa May in London to talk about the carmaker's future in the UK.

The question was whether Nissan would build its new Qashqai SUV model at Britain's largest car plant. "The decision-making progress is in the next few weeks and months, with an outcome expected before the end of the year," a company source told the Reuters news agency.

Ghosn did not disclose to what extent the issue of compensation had been raised in his talks with Theresa May. He only said "I'm confident the British government will continue to ensure the UK remains a competitive place to do business."

May for her part said she would certainly co-operate with the Japanese auto maker in the future.

"We will continue to work with Nissan as we develop the environment for competitiveness of the automotive industry here in the UK to ensure its success."

Nissan has been concerned that Britain is headed toward a "hard Brexit," which would leave it outside the European single market and facing tariffs of up to 10 percent on car exports.

Right now, the company produces its Juke, Qashqai and Leaf car models at the Sunderland facility in the UK, with around 500,000 vehicles rolling off the production line every year.

Japanese carmaker Nissan has conformed it'll buy a large stake in scandal-plagued domestic rival Mitsubishi Motors. For Nissan, the investment is above all meant to increase its clout in the small-car market. (12.05.2016)