Women who fear losing their husbands, want to ward off the second wife, or enrich time spent between the sheets, are secretly taking their chances with untested 'aphrodisiacs' in northern Nigeria. 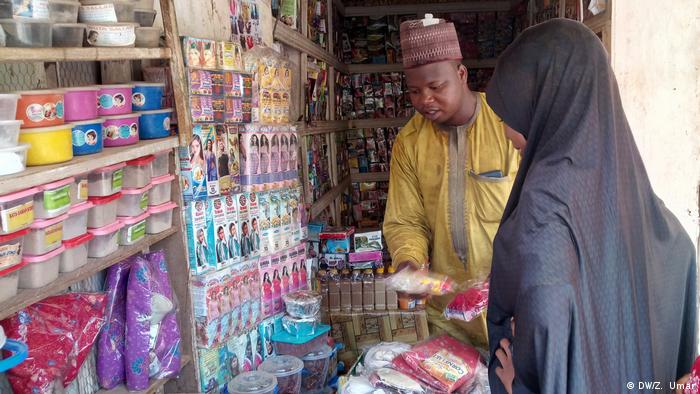 Abubakar Ba Matsala’s shop in Katsina metropolis in northern Nigeria is a popular stop for women – young and old, from high or low income families. The trader say up to 100 women come by on a daily basis and they usually after one thing – "Kayan Mata" or "women’s things." Locals believe the mixtures, ointments and powders increase women’s sexual attraction.

In the deeply conservative and predominantly Muslim north of Nigeria, sex and anything to do with it is taboo. Islamic scholars discourage the use of the so-called aphrodisiacs, which they view as an unnatural means of increasing sexual pleasure. And yet, both men and women frequent the little market stalls that stock them.

The potions that Ba Matsala sells claim to do everything from firming women’s breasts to, tightening vaginas and boosting sexual strength and pleasure. The ingredients are natural, he insists, even though his recipes seem far from local and slightly daunting. "This is the penis of a penguin," he says. "We dry it and make into powder, we then spice it with honey and it can then be inserted into the vagina." (Editor's note: penguins actually do not have penises but cloaca - an opening which both sexes have. During copulation the male and female cloaca must touch to allow the transfer of the sperms). 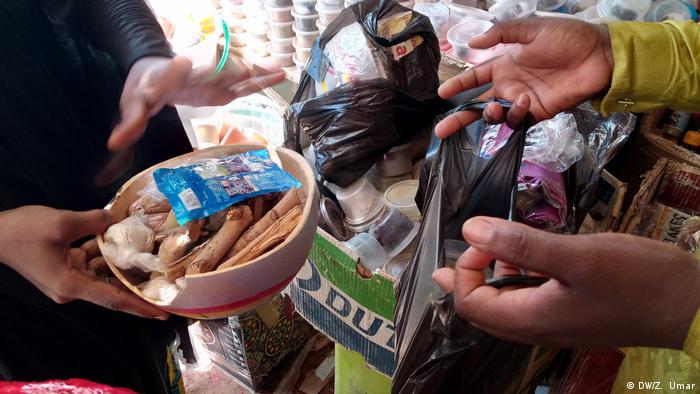 Some customers spend up to $28 per month on the aphrodisiacs

Balaraba, one of Ba Matsala’s customers, says she has been using the aphrodisiacs for years. "I use a cotton bud to put the medicine into my vagina," she says. "I do this three to four times a month and my husband is happy with me because I am sure when I insert the herbal lotion I become a new woman."

For many of the women, the aim is to prevent their husbands from marrying an additional wife as Islam permits. Balaraba believes that Ba Matsala’s potions increase her husband’s sexual desire and endurance while having sex. "Sometimes we spend 30 to 40 minutes before we finish the first round, and the second round may even last up to an hour," she gloats. "I believe when a woman does this, she will maintain a good image in the eyes of her husband."

Doctors warn about the effects

What is in these so-called medicines is often difficult to tell. A study conducted at the University of Kano's department of Nursing Sciences and Applied Health Sciences showed that nearly half the study participants used local medicine and aphrodisiacs. It also showed that there was no regulation of the so-called medicines and very little knowledge of what was actually inside them. It urged doctors, nurses and other medical staff to ask their patients about their use of traditional medicine as well as the need for further studies on the ingredients and their effects on the body.

Musa Garba Ruwan is a medical doctor in Katsina. He says the safety of the traditional sex enhancers is questionable. “When you take something and put it inside yourself, you don’t know whether it could be irritating? What does it cause, what does it contain? For how long does the herbalist kept it in his home? Inside what bag or container did he keep it? It may contain a lot of germs, leading to things like pelvic inflammatory diseases. This can even cause infertility.”

The women, says Ruwan, should simply stay healthy and use their charm to impress their husbands. In the conservative Muslim society, the use of aphrodisiacs is rarely discussed in public

The potions come at a cost

To her, that’s the way to avoid a polygamous marriage. "I don’t have a co-wife and I am not expecting my husband to get an additional wife. In the past my husband was planning to take additional wife but I ran to this herbalist and I can tell you by the time I came here the issue died a natural death," she says.

While speaking about one’s bedroom secrets is often frowned upon, amongst one’s peers the topic of aphrodisiacs is a welcome topic of discussion. In a town square in Katsina, a group of married men are more than happy to elaborate on it and they also say that they know what their wives are up to. "Husbands know their wives. So they notice any changes," says Sararin Kuka, an elderly Katsina resident.

Quackery or a real alternative: What is Traditional Chinese medicine?

This week, the World Health Organization will adopt its new International Classification of Diseases. One point of bitter contention: whether Traditional Chinese medicine should be recognized for treatments. (20.05.2019)

A UK court has sentenced a Liberian-born nurse to 14 years for leading a sex trafficking ring that forced Nigerian women to work in German brothels. The nurse threatened her victims with voodoo magic to keep them quiet. (05.07.2018)