Nigeria has reportedly recaptured 36 towns from Boko Haram. The successes come after the start of a four-nation military offensive with Chad, Cameroon and Niger. 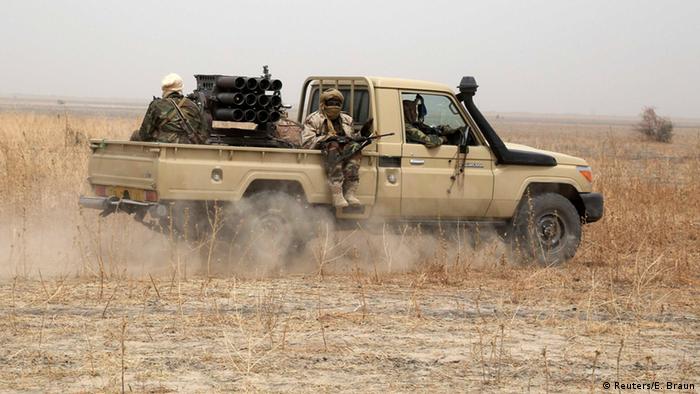 Nigerian national security spokesman Mike Omeri said four Boko Haram-controlled towns had fallen since Friday, including three in Borno state and Buni Yadi, in neighboring Yobe. On Tuesday, Nigeria had announced that just two towns were taken back. Crucial "cooperations and alliances" have led to victories over the group, he said, thanking neighboring Cameroon, Chad and Niger for cutting off "the supply lines of the terrorists."

"It is hoped that the unfolding regional cooperation will hasten the total defeat and extermination of Boko Haram in Nigeria and the subregion," Omeri said on Wednesday.

Chad has made a particularly large contribution to the four-nation campaign, flushing Boko Haram fighters out of several parts of Borno state in Nigeria. The conflict has killed more than 13,000 people since 2009. The fighting has displaced more than 1.5 million people.

Despite the recent string of successes against Boko Haram, which pledged allegiance to the "Islamic State," the group was able to launch a suicide attack that reportedly killed dozens Tuesday.

Niger's police spokesman has reported the deaths of 513 Boko Haram members there. The provisional count does not take into account land and air operations launched Sunday jointly by Niger and Chad's army in Nigeria, Captain Adili Toro said. Niger has also lost 24 soldiers in operations that have also killed at least one civilian and wounded 38 troops, he said.

"These results were achieved, not only because of the decision by authorities to proclaim a state of emergency, but also by the dedication of the population who did not hesitate to denounce accomplices," Adili said on Wednesday. He added that Niger would extend the state of emergency by three months.

Defense Minister Jean-Yves Le Drian said France would increase its West African counterinsurgency force to support the fight against Boko Haram. The roughly 3,000 troops had largely tracked al Qaeda-linked militants spanning across the Sahara from Mauritania in the west and southern Libya in the east.

"We will slightly increase the numbers on Barkhane," Le Drian told reporters.

On Wednesday, the United States announced that it would seek to revive a training program with the Nigerian military pulled last year after a dispute over weapons procurement.

In February, Amnesty International reported that conflict and insecurity had led to tragic consequences for Africa.