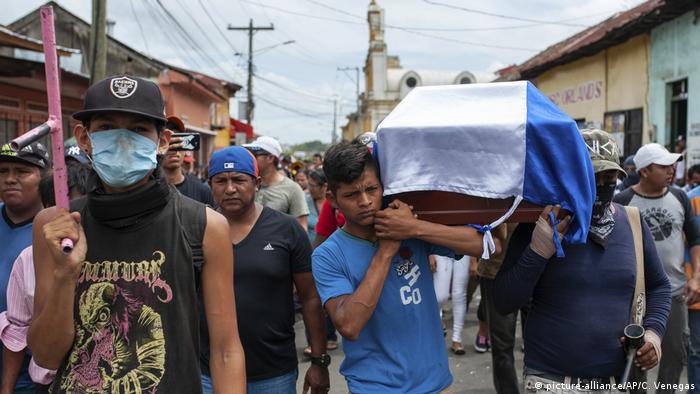 Heavily armed Nicuraguan police and paramilitaries recaptured the city of Masaya from anti-government rebels on Tuesday, as the government moves to suppress months-long unrest against President Daniel Ortega.

Government forces focused the hours-long assault on Masaya's flashpoint neighborhood of Monimbo, with at least three people being killed in the siege and 40 others taken into custody, a Nicaraguan human rights groups said.

"Today was the turn of Monimbo, Masaya, which now has streets that have been liberated from blockades," the government wrote on its website, adding that people can now "move freely."

Tuesday's assault on Masaya is the latest in a string of government-led offensives against protesters to quash dissent and bring down makeshift barricades. In particular, forces loyal to Ortega have targeted the Monimbo suburb in Masaya, a known opposition stronghold.

Nicaraguan Archbishop Silvio Baez sounded the alarm on Twitter. "They're attacking Monimbo! The bullets are reaching the Maria Magdalena parish church, where the priest is sheltered," Baez wrote. "May Daniel Ortega stop the massacre! People of Monimbo I beg you, save yourselves!"

Vice-President Rosario Murillo said on Tuesday authorities were just working to recover "security and peace" for residents and refered to the protesters a "hate-filled minority."

Over the weekend, government forces repeatedly opened fire on protesters, including students. While the death toll varies depending on the source, it is believed that between 280 and 360 people have been killed since the protests against leftist President Daniel Ortega first started in April.

The unrest in Nicaragua seems set to escalate, however, with the UN's human rights office accusing the police and the government of killings, torture, and unlawful imprisonment on Tuesday.

"The great majority of violations are by government or armed elements who seem to be working in tandem with them," UN human rights spokesman Rupert Colville told the Reuters news agency. According to Colville, most of the protesters were peaceful though some of them were armed.

The government of Nicaragua repudiated UN criticism in a written statement, saying that "these kinds of remarks" made the UN "complicit with the actions of terrorist groups have carried out, killing Nicaraguans and destroying our country, with the goal of deposing a constitutional government, democratically elected by our people."

The EU has offered to mediate, with the bloc's top diplomat Federica Mogherini telling the government in Managua it expected "an immediate end of violence, repression and arbitrary detentions."

"This government cannot continue and we need Daniel Ortega to go," said Jagger, who serves as a goodwill ambassador for the Council of Europe, is a senior representative of Amnesty International USA, and the founder and head of the Bianca Jagger Human Rights Foundation.

The 73-year old activist previously drew public attention through her acting career and her marriage to rock star Mick Jagger in the 1970s.

"The government of Daniel Ortega acts despicably," Jagger told DW in an interview conducted in both English and Spanish on Tuesday. "It's a bloodthirsty government, a despicable government that wants to kill anyone who opposes it."

Read more: Bishops travel to besieged city of Masaya to 'prevent a massacre'

Daniel Ortega is a former Marxist guerilla leader who first took power in 1979 and stayed in office until 1990. He ran for president in 2006 and, after winning the election, assumed power once more in 2007. His wife, Rosario Murillo Zambrana, serves as vice-president.

A government-sponsored pension reform sparked first protests in April this year, but the rallies soon escalated into an anti-government movement, with authorities responding with deadly force. The leaders are demanding early elections or the resignations of Ortega and his wife.

Last week, police arrested opposition leader Medardo Mairena and accused him of being a "terrorist" who organized and ordered an "attack" that killed police officers and a protester. This was followed by lawmakers passing a new anti-terrorism law on Monday, with critics saying its vague definition of terrorism could be used against peaceful protesters.

A prison where Nicaraguan President Daniel Ortega was once jailed by the country's right-wing dictatorship now holds his own dissidents. DW spoke with family members and activists camping outside El Chipote jail. (12.07.2018)

Record German debt due to pandemic, but less than expected 2h ago