Nicaragua's government has released 50 people arrested during a year of anti-regime protests. However, the new amnesty law also protects police and supporters of the government who assaulted demonstrators in 2018. 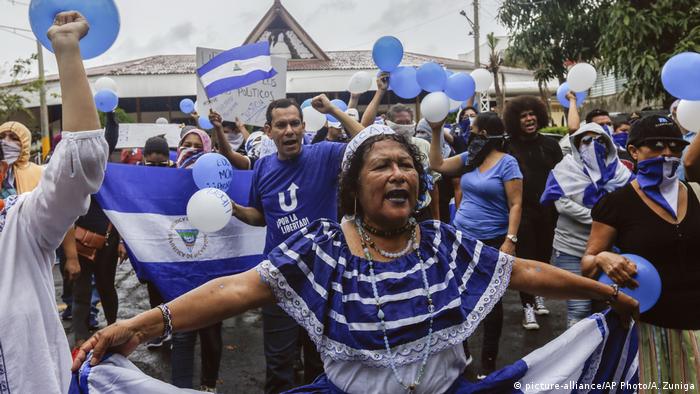 On Monday, Nicaragua's government released 50 more people jailed for their roles in protests during months of political upheaval in 2018.

A new law extends protections to "people who have not been investigated, who find themselves under investigation" or in criminal processes and "complying with their sentences."

"I'm free, but I still feel imprisoned," said Hansell Vasquez, one of the people released on Monday. He added that he felt "happy to have escaped that hell" but also "sad and worried because the country is more locked up than when we became prisoners."

According to Nicaragua's Interior Ministry, the 50 people most recently released had spent time in prison on charges of committing crimes against public safety. The government announced plans to release other people held on the same charges.

The government arrested more than 700 people in demonstrations in 2018 and, according to the Inter-American Commission on Human Rights, 325 mostly opposition protesters died at the hands of security forces.

Some opposition groups put the number of fatalities at 594, while the government has only acknowledged 199 deaths. The attacks left more than 2,000 protesters wounded. More than 60,000 Nicaraguans have gone into exile because of political strife over the past 14 months.

President Daniel Ortega has pledged to release people detained in the anti-government protests as a gesture of good faith to the opposition and an effort toward encouraging a national dialogue. The Civic Alliance opposition group recently reported that 186 opponents of the government remain behind bars.

The releases came two days after lawmakers passed an amnesty bill for crimes related to the largely student-led protests that erupted in April 2018. Though the new law calls for the government to release jailed dissidents immediately, it also closes the door on investigating and punishing security forces involved in the deadly repression of the protests. A coalition of more than 70 opposition groups rejected the law because it holds no one responsible for the deaths of the protesters.

Opposition leaders say the measure would also forgive killings and other abuses by police and pro-government civilian militias who attacked demonstrators. According to the government, the amnesty will lead to the "reconciliation of society."

The UN's top human rights official has blasted the legislation as a way of granting impunity to the officials who committed crimes.