German activists have launched the country's largest-ever civil lawsuit in protest of a planned free trade agreement between the EU and Canada. They argue the trade pact violates the constitution and the rule of law. 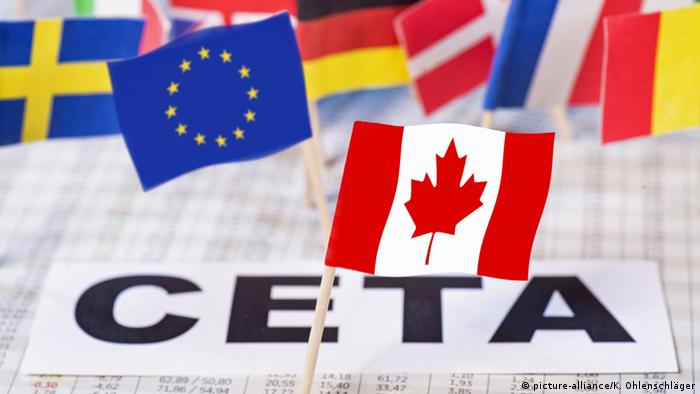 A group of German NGOs filed a complaint to the Constitutional Court on Wednesday, asking the nation's highest judges to block the early - albeit temporary - implementation of the Comprehensive Economic and Trade Agreement (CETA).

The organizations, Campact, Foodwatch and Mehr Demokratie, say CETA subverts the German constitution because it does not leave room for parliamentarians to interpret the agreement or vote against it.

They are trying to prevent CETA from being "provisionally applied" before Germany's lower house of parliament, the Bundestag, ratifies it. The trade pact could be adopted as early as this autumn.

"The provisional application of CETA is highly dangerous because it will create a fait accompli," the executive national chairman of Mehr Demokratie, Roman Huber, said in a statement.

In a demonstrative display of their opposition to the planned trade deal, the NGOs delivered more than 70 boxes containing 125,047 signed powers of attorney to the Karlsruhe-based court on Wednesday morning. They said the high number of participants made the case the biggest constitutional complaint in German history.

Opponents of CETA contend the trade pact aims to do more than just remove cross-border tariffs on trade. They say it also aims to water down or abolish environmental, health and consumer protection regulations.

A central object of scorn is a mechanism for resolving disputes between companies and countries that would bypass national courts. Rather than go through normal legal channels, businesses would be empowered to make their case in front of a panel of arbitration judges.

"The mere possibility that a court of arbitration could oblige the German state to make high compensation payments would have a considerable influence on regulation and legislation," the NGOs said in a statement.

Germany's economy minister, Sigmar Gabriel, does not share their worry. He's a proponent of both CETA and a larger trade deal between the EU and the United States, the Transatlantic Trade and Investment Partnership, though he recently expressed skepticism that TTIP would ever see the light of day.

Negotiations over TTIP had "de facto failed," Gabriel said last weekend. Two days later, after France called for an end to the talks, Gabriel reiterated his doubts that an agreement would be reached.

"I think the American actively ended TTIP through their simple unwillingness to make concessions to the Europeans," he said.