Five countries have qualified for the Women's Euro for the first time. All are considered outsiders, but a couple of them, at least, believe they are capable of pulling off the odd upset. 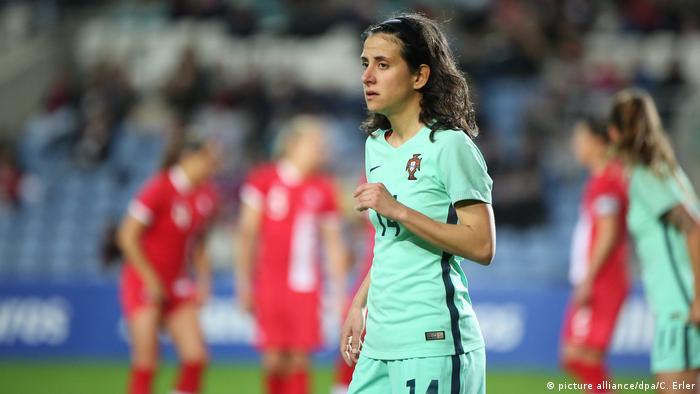 Much of the focus in the opening days of the Women's Euro 2017 has been on the traditional favorites. But the expansion of the tournament to 16 teams has given an opportunity for some new names in the women's game to take their first steps on the big stage.

Among the five first-timers are surprise playoff qualifiers Portugal, whose women are looking to capitalize on the feel-good factor in the country's footballing community following the national team's victory in the men's tournament in France last year.

"The people are more with the players now, not just with the men but with the women too," Portuguese midfielder Dolores Silva (pictured above) told DW after the team's training session on Monday.

"Women's soccer is getting better, now the big clubs have women's teams and that's great for us. I hope that other clubs can do the same in the coming years, which will help women's soccer a lot. I think the men's win last summer was great and people are getting more excited about soccer."

Silva's team are the lowest-ranked side to have made the finals and they open their campaign against neighbors and rivals Spain on Wednesday in the 12,600 capacity De Vijverberg Stadium in Doetinchem before meeting Scotland in Rotterdam on July 23 and England in Tilburg on July 27.

The 25-year-old Silva, who plays in the second tier of Germany's women's Bundesliga for USV Jena, knows the odds are stacked against her team. Despite her relative youth, Silva has taken on a leadership role in the group, leaning on nearly a decade of international experience as well as her time in Germany to help a young squad cope with the more intense spotlight a major tournament brings with it.

"I'm getting more excited," she beamed. "It will be a great emotion to be in a big stadium playing in my country's jersey. It's a big sensation. I don't think people expect us to win the tournament [because] it's our first time playing in a big tournament. I think, in our heads, it's just game by game and we'll try our best to play our football, to show the people our soccer and at the end we can maybe be a surprise."

Portugal will be the penultimate debutants to kick off in the Netherlands. Belgium were the first, losing 1-0 to Denmark on the opening night, while Scotland play perennial qualifiers and old enemy England after Portugal's match on Wednesday. 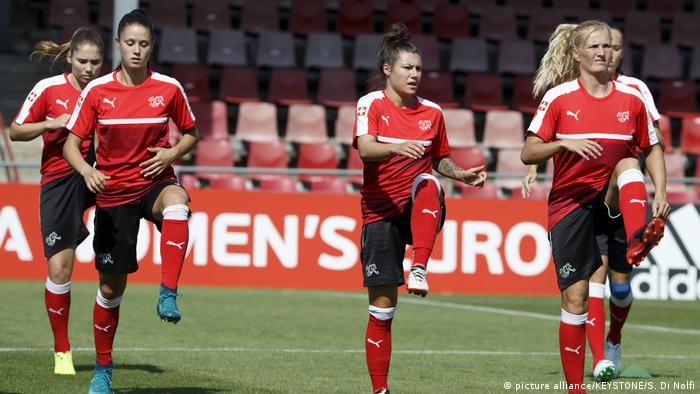 Sandwiched in between those games is the battle of the remaining newcomers - Switzerland vs. Austria, which ended in a 1-0 defeat for the Swiss.

The Swiss may be considered outsiders but defender Rachel Rinast believes they have a trump card - the power of song. The 26-year-old, born in Germany, wrote and is the lead vocalist for the team's tournament song, "United in Red," with her teammates providing the backup vocals.

"I've sung a few times before, but to do this was really special," the former Cologne player, who will move to Bern after the tournament, told DW. "I'm so proud to sing for my team, it was a lot of fun. And the best part was when we got together in the studio to sing the chorus."

Rinast also said she wouldn't be holding back her vocal talents when it comes to the anthems on Tuesday in Deventer and neither will she be shy about celebrating a victory: "If we win, I'm sure I'll end up dancing on a chair in the locker room, singing," she laughed. At least two more chances for such changing-room antics remain, when the Swiss take on Iceland (on Saturday) and France (next Wednesday).

Whether it's sharing a harmony, leading by example or taking inspiration from your compatriots, the newcomers at Euro 2017 are determined to make their presence felt.