A Christchurch vigil to reject racism and grieve for 50 Muslims killed last week in local mosques drew 15,000 people. One of the victims injured in the shooting said the vigil showed "that we are all one." 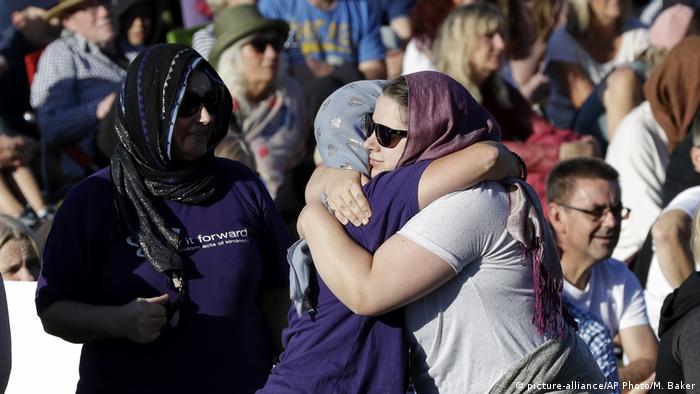 New Zealanders continued their homage Sunday to victims of the Christchurch massacre by gathering in the city's Hagley Park near the al-Noor mosque, one of two places of worship targeted by a suspected white supremacist.

Many non-Muslim women wore head scarves Sunday, some made by members of Christchurch's Muslim community, to support victims and fight racism, Reuters reported.

New Zealand statistics suggest that around one percent of New Zealand's 4.9 million residents could be Muslim.

On Friday, the city had also seen the burials of 26 victims at its Memorial Park Cemetery.

The 28-year-old Australian citizen suspected of carrying out the attacks is due to appear in court on April 5 to face an initial murder charge. More are expected to follow.

Sunday's evening vigil at Hagley Park began with an Islamic prayer, followed by a reading of the names of those killed at Friday prayers on March 15, among them present and former pupils of Christchurch high schools.

Present in a wheelchair was 21-year-old Mustafa Boztas, who said he was recovering well from bullet wounds in the leg and liver.

"It's beautiful to see what the community has put together to show they care about us, and to show that we are all one," said Boztas.

Sam Brosnaham, student president at the city's Canterbury University, urged New Zealanders to express openness to persons who "do not look like you, do not talk like you, or express faith in the same way you do," reported New Zealand's Fairfax media website known as Stuff.

Bazir Shah, the president of the University of Canterbury Muslim Student Association, said the outpouring of grief was "reassuring for us Muslims here who want to contribute to New Zealand society," but added that Islamophobic remarks still needed to be challenged.

'Many faiths brought together'

Catholic bishop Paul Martin said there had been a "misuse and abuse" of God's gift of freedom.

"We are many faiths brought together by tragedy," Martin said.

The vigil ended with a rendition of "Welcome Home," a diversity-appeal song heard often in recent days, performed at Hagley by Conor Moore — composed in 2005 by New Zealand's legendary singer-song-writer Dave Dobbyn.

It includes the refrain: "See I made a space for you now, Welcome home, From the bottom of our hearts."

Prime Minister Jacinda Ardern announced Sunday that a national remembrance service would be held on Friday at Christchurch's Hagley Park for people "all around the world."

It would show that "New Zealanders are compassionate, inclusive and diverse, and that we will protect those values" and would be jointly led by the government, the city, local Ngāi Tahu Maori and the Muslim community, she said.

The Turkish president has repeatedly shown video footage of the Christchurch mosque shooting. New Zealand's deputy prime minister discussed the screenings with Erdogan at an emergency summit of Muslim nations. (22.03.2019)