Heavy rainfall has triggered landslides near tourist hot spots across New Zealand's South Island. Authorities evacuated a number of homes and sent helicopters and planes to airlift those stranded. 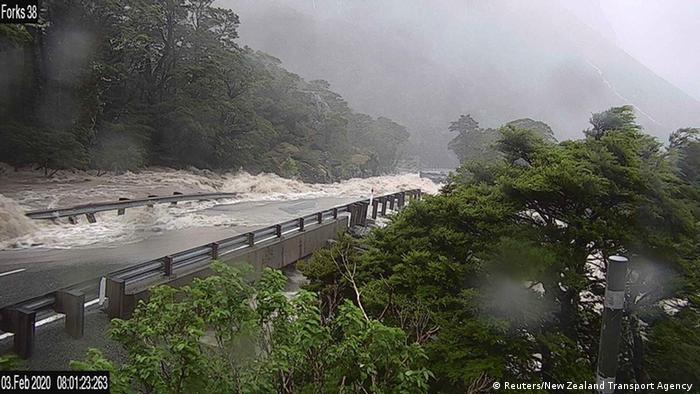 The South Island was bombarded with more than 1,000 mm (39 inches) of rainfall in only 60 hours, prompting landslides on major roads and causing rivers to overflow.

Earlier on Wednesday, local authorities warned residents in the low-lying towns of Gore, Mataura and Wyndham to evacuate immediately and head to higher ground as the Mataura river showed signs of bursting. Residents were told to take with them clothing, medication and identification documents.

"We have issued notices to evacuate and to prepare to evacuate to 6,000 people across the region," a spokesperson from the Emergency Management Southland (EMS) told French news agency AFP.

Two minor injuries were reported after a landslide struck a hut on the Routeburn walking track, near Milford Sound, with both people receiving treatment at the scene.

Around 200 people were airlifted to nearby Te Anau as floodwaters blocked access to sections of the only road to the popular Milford Sound hiking track, according to the EMS.

"The tourists... have been well catered for," it said. "Morale has been high amongst the visitors and staff, as they received regular briefings and have been in contact with friends and family."

Authorities ordered the power to be cut in affected areas as a precaution and set up evacuation centers in churches and schools across the Southland region.

Around 1,000 tourists are stranded in the touristic town of Franz Josef, famous for its glacier, after the weekend's stormy weather caused landslides, flooding the small town's main highway.

Some tourists were opting to escape by helicopter or small plane while others were waiting until the highway reopened. Local authorities said access to the town likely won't reopen until Friday.

Westland Mayor Bruce Smith said there were about 20 planes and helicopters called on to help residents and tourists leave the area.

"They all have the option of taking fixed-wing planes or helicopters," Smith said. "It's just a question of who writes the check. I understand that.''

Smith added that more people would have been affected if the landslides happened a few weeks later, as that is when the area enters peak summer season.

Approximately 6,000 tourists travel through the Franz Josef region each day during peak season.

The two-week search for the bodies of two remaining victims of the White Island volcano eruption has been discontinued. The death toll is now 19 and several people remain in a critical condition. (24.12.2019)