The All Blacks who lost the 1995 Rugby World Cup in South Africa, to South Africa, were deliberately poisoned before the final. That is if you believe Nelson Mandela's ex-bodyguard, on a speaking tour in New Zealand. 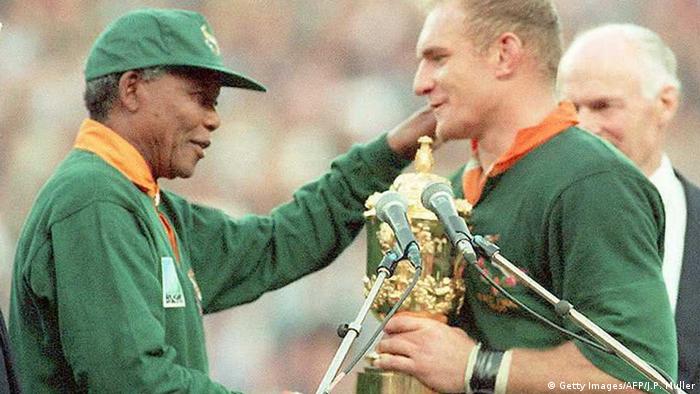 Rory Steyn - a former senior South African police commander involved with All Blacks security at the 1995 Rugby World Cup and an ex-bodyguard to President Nelson Mandela - told the "New Zealand Herald" that he believes betting syndicates poisoned 27 of the 35 members of the All Blacks squad.

Currently in New Zealand for TedxAuckland to talk about his time as Nelson Mandela's chief bodyguard, Steyn's allegations resurrect a conspiracy theory that is both almost impossible to prove, but certain to fill seats ahead of his scheduled talk.

Thousands of fans have converged on Auckland’s Eden Park to pay their last respects to Jonah Lomu. The All-Black great passed away earlier this month at the age of 40. (30.11.2015)

The 1995 Rugby World Cup Final was played at Ellis Park Stadium, Johannesburg on 24 June 1995, with South Africa winning the match 15-12 in a very evenly matched encounter. New Zealand had been the bookmakers' favorites before the final.

The Springbok victory was widely heralded, coming as it did a year after South Africa's first post-Apartheid elections, as a moment of national pride and a step towards reconcilitaion in the country. Nelson Mandela, a believer in sport's ability to build bridges, attended the final wearing the country's rugby jersey, despite its past connections to racial segregation.

Something in the water?

Steyn said the All Blacks camp had been worried after the semifinal win over England in Cape Town that their food may have been contaminated. The team's management reportedly decided that they would eat separately to the rest of their hotel's guests in the week before the final.

"I said that makes it easier to target them, I didn't think it was a good idea," Steyn said. "On the Thursday [June 22] before the final, which was on Saturday [June 24], they were poisoned. About two-thirds of the squad got very sick, properly sick," he said, adding that he believed it had been the water that had been "got at."

The former police commander said he suspected bookmakers of seeking to avoid a big payout when the runaway favorites won the title: "The odds were all on the All Blacks."

Various allegations have been made surrounding the days prior to the final.

Many of the New Zealand players suffered food poisoning 48 hours before the game, and New Zealand coach Laurie Mains alleged a mysterious waitress known as "Suzie" had deliberately poisoned the team's water in the week before the final.

The food poisoning symptoms were gone the day after the final, but during the match some New Zealand players could be seen vomiting on the sidelines.

Later interviews with some All Blacks players, however, indicated that intentional food poisoning was unlikely. One team member Eric Rush, for example, said the team had gone "to the Pizza Hut down the road." 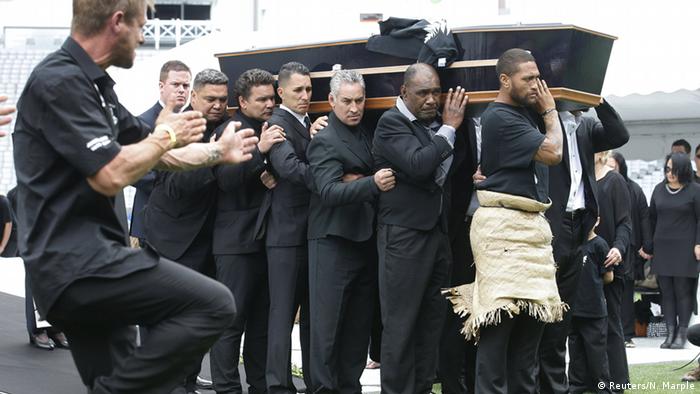 New Zealand buried perhaps the most renowned of the '95 All Blacks, Jonah Lomu, late last year

The All Blacks manager during the 1995 World Cup, Colin Meads, has blamed what he called "dodgy milk", which he and some others of the All Blacks drank after a Wednesday night gathering prior to preparing for the match.

Meads also blames himself for keeping the situation secret, saying that "It was my call...we had a big night out on the Wednesday night. I was feeling not too fit the next day. And often when you are feeling like that you have a couple of glasses of milk that puts you right. We had a meeting on the Friday morning in my room and I said, 'We don't tell anyone. Tell the players not to tell anyone back home.'"

All Blacks coach Laurie Mains conversely argues that the food poisoning was part of an orchestrated campaign of dirty tricks by the Springboks and their supporters.

In the lead up to the final listening devices were also reportedly discovered in rooms and car alarms were set off in a synchronized fashion around the All Blacks' hotel early in the morning.

Mains has argued that it was too much of a coincidence that of the 35-man party that ate at that particular lunch venue in the hotel, about 27 went down in the space of 12 hours. According to Steyn in his New Zealand Herald Interview, Mains hired a private investigator - but the sleuth's endeavors turned up very little.

A report from the French Senate has concluded that Liverpool fans were not to blame for the chaos ahead of this year's Champions League final, but rather a "string of dysfunctions" in the organization.

We wanted to know which sports event you get excited about. Currently, many soccer fans are watching the UEFA Euro 2020 taking place across Europe. Find out here if you’ve won a DW backpack with goodies.