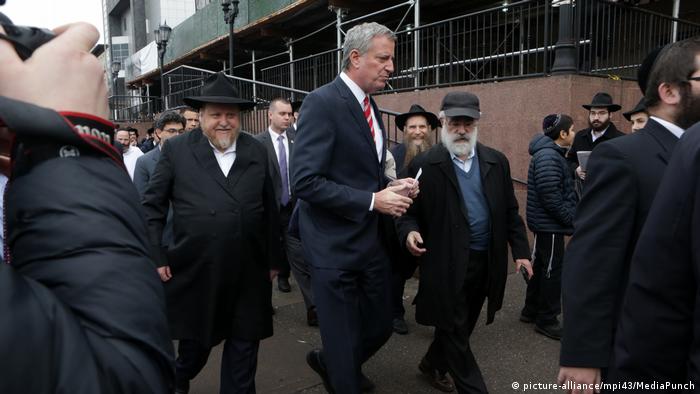 A recent increase in anti-Semitic attacks has prompted New York City to increase its police presence in neighborhoods with large Jewish populations, the mayor of New York announced on Friday following the most recent attack.

At least six attacks against Jews have been reported in New York City since Hanukkah, the eight-day Jewish festival of lights, began on Sunday.

Read more: American Jewish Committee CEO: 'It's time to wake up and see the menace clearly'

More officers will be sent to patrol the neighborhoods Borough Park, Crown Heights and Williamsburg.

Police will also make more frequent visits to synagogues. "I feel pained that in this society, a place that is supposed to be of respect for everybody, a season when we're supposed to be respecting everybody, we see hate rearing its very ugly head. We will not accept it," New York City Mayor Bill de Blasio said during a visit with representatives of a local Jewish community.

The mayor's announcement followed an assault on Friday morning. A woman slapped three other women wearing traditional Jewish clothing and shouted anti-Semitic slurs at them. The assailant was arrested and will be charged with a hate crime.

On Tuesday, a group of people allegedly threw a drink on a 25-year-old man and shouted anti-Semitic slurs. Later that day, a 56-year-old man reported he had been physically assaulted.

A woman on Thursday hit a 34-year-old Jewish woman in the head with a bag and said, "Your end is coming." She was later charged with assault as a hate crime.

The string of assaults follows a deadly attack at a kosher market in northern New Jersey on December 10, which left six people dead.

"The persistent and violent anti-Semitic attacks on Jews in the New York area has reached a crisis level," said Eric Goldstein, the CEO of the UJA Federation of New York, a large Jewish charity.

"It's something that's very alarming, and we treat it very seriously,'' police Chief of Detectives Rodney Harrison said at a Friday news conference.

"It's even more despicable that it occurred over the holidays," the governor said.