A new VW law preserving state influence over the car group, which has provoked conflict between Berlin and the European Commission, took effect on Thursday, the German justice ministry said. 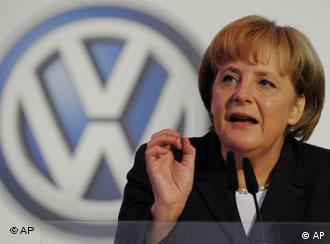 The amended legislation preserves the German state of Lower Saxony's blocking minority holding of 20 percent in Volkswagen, the biggest European carmaker, compared with a 25 percent stake needed in other German companies.

The law also stipulates that the installation or relocation of a VW auto factory in Germany must be approved by employee representatives on the VW supervisory board, the ministry added in a statement.

German lawmakers gave their final approval to the law in late November, and it replaces a text that was almost 50 years old and was rejected by the European Court of Justice last year.

German officials made as few changes as possible to the new law, judging it preferable to maintain special circumstances for VW, and industrial icon in the country.

The European Commission has already said it feels the modified text prevents new investors from joining exisiting VW shareholders and EU officials have threatened to challenge the new law again in court.

German Justice Minister Brigitte Zypries was quoted by the statement as saying that "the VW law has proven itself in the past 50 years and made the Wolfsburg group one of the biggest automakers in the world."

VW is based in Wolfsburg, which is located in Lower Saxony, and the initial legislation was designed to protect VW from hostile takeovers.

"That is why we have to conserve the law as much as possible," Zypries said.

VW is however being taken over by the luxury sports car maker Porsche, which firmly opposes the law because it grants Lower Saxony a virtual veto over strategic decisions.

The European Commission has given Germany two months to comply with a court ruling on its controversial Volkswagen (VW) law or risk the wrath of European Union judges once more, officials in Brussels said Thursday. (27.11.2008)

The EU is set to take legal action against Germany after Berlin passed new legislation to cement state rights over Volkswagen. Porsche, the company’s primary shareholder had lobbied hard against the bill. (14.11.2008)

German Chancellor Angela Merkel dug her heels in Friday in a dispute with the European Union and Porsche about state influence over Europe's biggest carmaker, Volkswagen. (20.09.2008)