In Ukraine a national youth orchestra is being founded. Young people from the eastern and western parts of the country will be able to make music together in an initiative supported by Germany's National Youth Orchestra. 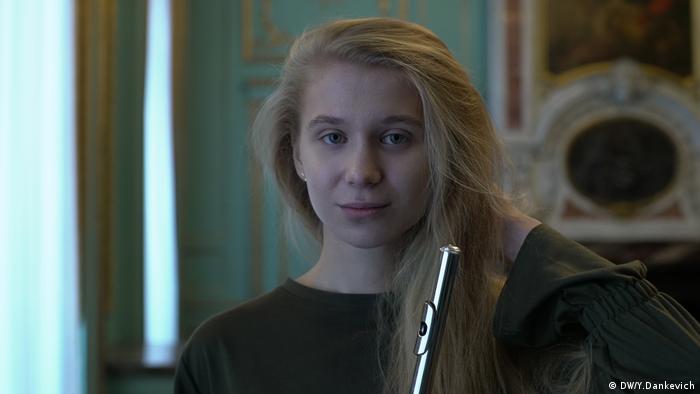 When Kateryna Movchan picks up her flute, war and daily stress vanish from her mind. There's only Mozart and her instrument.

Movchan comes from Luhansk and has lived with her parents in Kyiv for two years. "I haven't been back home for a long time, and I don't want to return there anytime soon," says the 19-year-old. "The tragic events in the eastern part of our country are a heavy burden on me."

Music helps Movchan overcome the stress, she says. "I was four years old when my parents gave me my first flute. Very soon, I noticed that once you start playing, everything else becomes less important. That's still true today.".

Movchan is one of 98 young musicians who traveled from all over the country to Lviv in western Ukraine earlier this month to participate in a qualifying examination for the country's new youth orchestra. They were chosen from 300 applicants and assessed by an international jury.

Musicians from all parts of Ukraine 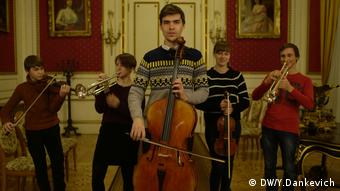 The musicians can relax at the photo shoot after the audition

The two-day examination marathon took place in the glamorous rooms of the Potocki Palace. "The founding of the orchestra is a great idea," commented hornist Bogdan Schajnjuk from Odessa. For the first time, young people from the entire country were coming together.

And that precisely is the objective. The national youth orchestra not only aims to promote the musical activities of young, talented people, but also to reduce mutual prejudices and resentment. "Ukrainians from the West and the East tend to have distance between them," said Oksana Lyniv. In her view, that's one of the factors behind the country's numerous problems. "They can only be overcome by establishing personal contacts, and by working together on creative projects," she added.

In addition to renowned Ukrainian musicians, there were also representatives from the German music scene among the jury members. The National Youth Orchestra of Germany and the Beethovenfest Bonn are supporting the founding of the new Ukrainian orchestra. 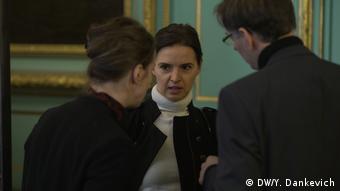 "It's our joy and honor to support this wonderful initiative of our Ukrainian colleagues," said Albrecht Holder, professor for clarinet of the Music Academy of Würzburg who was sent to Lviv by the German Music Council.

He says he is impressed by the accomplishments of the young musicians - and of Ukraine, a country he visited for the first time. "It's totally different! We're very influenced by the media, which only reports on war and various crises in Ukraine. But when you're really here, you see that Lviv is a western city with a happy cultural life. More people should come here to have the same experience."

New orchestra to perform in Bonn

The first big performance of the newly founded orchestra has already been planned. The Ukrainian musicians are set to visit Bonn in September 2017 where they will work on a program together with the musicians of Germany's National Youth Orchestra. That program will then be presented on September 14 as part of DW's Campus Concert at the Beethovenfest.

Kateryna Movchan is fascinated by that idea. "Germany is my big dream. I love the Berlin Philharmonic. I often download the recordings of their concerts. Their performance is unique. I cannot quite compare myself with them, but I'm proud to have the same profession. After all, I'm a musician myself."

After gentle revolutions, the Beethovenfest comes to an emphatic close

From the French Revolution to the Arab Spring: the festival theme of "Revolutions" contributed to a successful year - and next year's slogan will be a bit gentler. (10.10.2016)

Nike Wagner: After 'Revolutions,' next Beethovenfest to celebrate 'Love'

The Beethovenfest director Nike Wagner casts a look back at a season of "Revolutions" - and a look into the near and mid-term future, with the "Distant Beloved" paving the way to "Beethoven 2020." (10.10.2016)