Scientists in South Africa have announced the discovery of a new species of human called "Homo naledi." The find, which includes bones from 15 bodies, has been hailed as a "breakthrough" in evolutionary research. 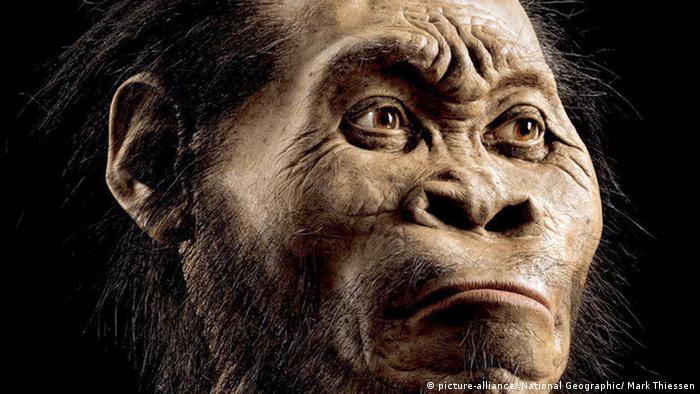 A previously unknown species of human has been discovered in South Africa according to an announcement from researchers on Thursday. The fossilized remains of 15 bodies were pieced together from 1,500 fragments, uncovered in hardly-accessible caves in 2013.

"I am pleased to introduce you to a new species of human ancestor," announced Lee Berger, professor at the University of the Witwatersrand in Johannesburg who led the work. Two researchers from the Max Planck Institute for Evolutionary Anthropology in Leipzig were also involved in the research.

The site is located 48 kilometers (30 miles) north of Johannesburg in the Cradle of Humankind, a UNESCO world heritage site where numerous hominin fossils have been found. Scientists had to squeeze through complicated cave chambers to access the fossil site, with certain passageways only 17.8 centimeters (7.5 inches) wide.

The research team named the creature "Homo naledi" which is a combination of the "Homo" evolutionary group - which contains both modern humans and extinct relatives - and the word for "star" in the local Sesotho language. 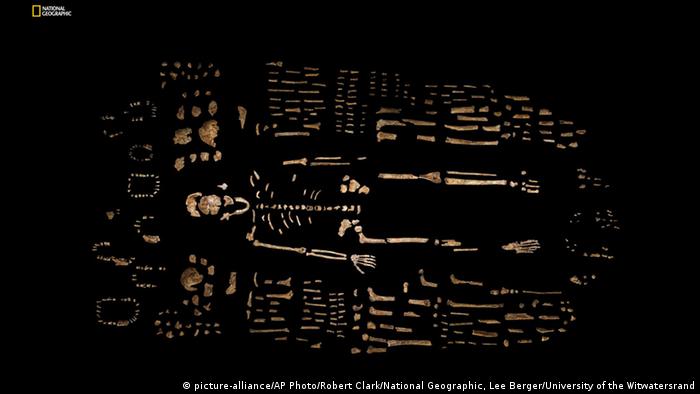 More than 1,500 fossil fragments belonging to 15 individuals were discovered in the "burial chamber"

Scientists speculate that the Homo naledi fossil site is actually a burial ground of sorts - a trait previously believed to be unique to modern humans. The 15 different bodies ranged in age from infants to the elderly and contained no tooth or claw marks.

"It does appear after eliminating all other possibilities that Homo naledi was deliberately disposing of its body in a repeated fashion," Berger told news agency Reuters in an interview. "That indicates to us that they were seeing themselves as separate from other animals and in fact perhaps from the natural world."

Along with burial practices, the naledi hands and feet contained a bone structure similar to modern humans, but that is where the similarities end. "H. naledi had a tiny brain, about the size of an average orange, perched atop a very slender body," said John Hawks, a senior author on the academic paper detailing the discovery from the University of Wisconsin-Madison.

Additionally, Homo naledi was approximately 1.5 meters (about 5 feet) tall and weighed about 45 kilograms (around 100 pounds). The exact age of the fossils, however, remains uncertain. The discoverers believe the fossils are around 2.5 million to 2.8 million years old, but say they could be younger.

Robots 3D-print themselves through AI evolution

Experts in Norway are making robots which have designed themselves through a process of artificial evolution, hoping one day to use the technology in disaster zones. DW's Lars Bevanger reports from Oslo. (18.08.2015)

First organisms to possibly have had sex discovered

Before the birds and the bees, there was Fractofusus, a prehistoric creature that scientists think was the first organism to use complex methods to reproduce, rather than just asexually multiplying. (05.08.2015)

It sounds like a made-up Wiccan expression, but it's cold, hard science: CERN scientists in Switzerland have discovered a pentaquark particle while using the Large Hadron Collider. (16.07.2015)