A new publication in the Edition series International Media Studies takes a comparative look at standards of journalism education in the framework of media and development. The publication can be ordered online. 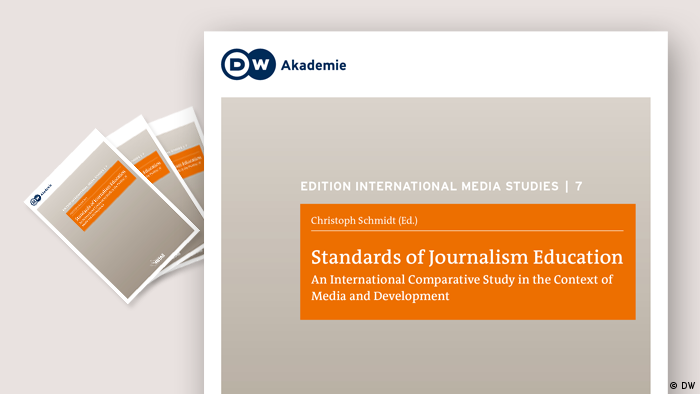 Training and educating journalists worldwide with an aim to promote free and independent media has for decades been a major aspect of media development cooperation. However, academic research in this area remains limited, especially as it relates to the status quo of journalism education in developing countries. The academic research project on International Journalism Education Standards (IJES) was initiated by DW Akademie's International Media Studies program with a goal to help close this gap. The new publication offers the research results of the IJES' comparative study on the standards of journalism education in four developing countries: Colombia, Kenya, Myanmar and Egypt.

Strengthening journalism training and education systems with the aim of enhancing free and independent media is a major field of activity of media development cooperation. This has been the case for many decades. Thus the lack of research regarding journalism education in developing countries is astounding. The existing research in this field can be described as focusing on certain industrialized countries – neither delivering much insight about regional differences nor the countries of the South.

The counterbalancing of Western perspectives through research in developing countries however, is much needed in a field like the development cooperation in order to assess outcomes and adjust strategies.

The academic research project on International Journalism Education Standards (IJES) was initiated by Deutsche Welle Akademie's International Media Studies program with the goal to fill part of the described research gaps in the field of international journalism education.

Its approach is a comparative study of four developing countries in different world regions: Colombia for Latin America, Kenya for Subsaharan Africa, Myanmar for Asia and Egypt for the Middle East. The decision for a comparative approach has been rewarded, since it has allowed the identification of some general tendencies in journalism education – such as a clear trend towards university-level education of journalists, for example.

Furthermore, the IJES study is interdisciplinary, connecting diverse fields like educational sciences, development studies and international media systems with the area of media and communication sciences.

The research in the countries has been conducted by researchers of the International Media Studies Master's Program, and in the case of Egypt, by a group of fellow researchers including professors and teaching assistants from the country itself.

To all of them, I would like to extend my gratitude for investing their time and passion into this research project. I would also like to thank all of the experts who shared there knowledge with us through interviews.