New phase in Afghanistan as NATO readies handover | World| Breaking news and perspectives from around the globe | DW | 22.03.2011 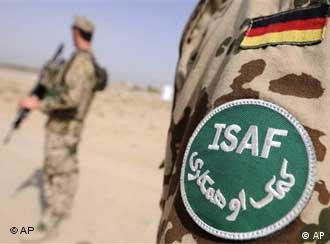 The handover from ISAF troops to Afghan forces began on March 21, 2011

International forces deployed in Afghanistan began their handover of security responsibilities to the local Afghan police and armed forces. But many Afghans think the withdrawal comes too soon.

Afghan President Karazi told army graduates at the Afghan military academey on Tuesday that Afgan forces will initially take responsibility for Kabul, the western city of Herat, the northern city of Mazar-e-Sharif, Mehtarlam in east, Lashkargah in south, and the relatively peaceful provinces of Bamiyan and Panjshir.

This initial transition of security from the NATO-led International Security Assistance Force (ISAF) to local Afghan authorities is the first step toward full assumption of control to be completed by the end of 2014.

Many Afghans, however, and in particular the Afghan police and armed forces themselves, believe that the handover is happening too soon.

The formal date chosen to begin the ISAF withdrawal, March 21, is the first day of the Afghan New Year. It is supposed to signify a new beginning for Afghanistan and the end to years of foreign intervention to fight the terror network Al-Qaeda and the country's former Islamist Taliban regime. 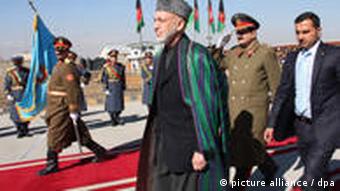 President Karzai has been pushing for more control over his country

Stability and security in doubt

There are major concerns that the current state of Afghanistan's defense forces is not adequate to the task of taking on the new responsibilities. Eshaq Peiman, a senior member of the defense ministry, is worried about the weaponry.

“Our army is armed to NATO standards with light weapons, but in terms of heavy weapons and armored vehicles, things look a lot different. For example, we have no artillery or missile units,” Peiman said.

The Afghan army currently has 155,000 troops in uniform, and another 90,000 are to be added in the next three years. The United States is funding additional equipment and training through 2014 with more than 10 billion dollars. 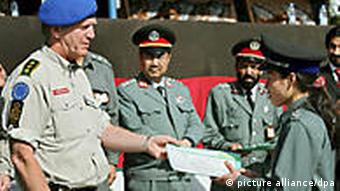 Doubts remain about the capabilities of Afghan forces

But Eshaq Peiman has his doubts as to whether this will be enough, considering the size of the task ahead. And he is not alone. Afghan Interior Minister Bismillah Muhammadi told Deutsche Welle that the country's police force is also not in the best of shape.

“We are not in a position to take care of ourselves. We do not have the weapons we need and the necessary training is lacking. It is true that the number of police is growing, but quantity is not quality,” the interior minister said.

A report last year by the International Crisis Group think tank agreed with that assessment and said that too much focus had been placed on quantity over quality and that combat readiness was "undermined by weak recruitment and retention policies, inadequate logistics, insufficient training and equipment and inconsistent leadership." 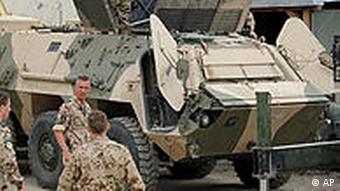 German troops in Mazar-i-Sharif may be leaving soon

“Setting a date for the withdrawal of troops sends a totally wrong signal because no one can say how the security situation is going to develop this spring or summer following the troop buildup last year,” he said.

Taliban have not been defeated

Muhammadi knows that a police force numbering 122,000 is not sufficient to ensure security in a country the size of Afghanistan.

Since being driven from power in 2001, the Taliban have grown stronger. Last year was the worst for civilian victims in the last ten years. According to United Nations figures, 2,777 civilians were killed in fighting or by Taliban bomb attacks and the numbers so far for 2011 do not look any better.

That is why many people in Afghanistan think the transition of security responsibilities is coming too early. Among the critics is Muhammad Arif Sharifi, who lives in Sare Pol province in central Afghanistan.

“Our armed forces over the last nine years have not been able to develop the strength required to defend the country. They are in no position at the moment to take on the Taliban and other terrorists alone. This is especially true for the police in Sare Pol,” Sharifi said.

These are hardly flattering words of praise for the United States, or Germany, which have spent the last ten years training police in Afghanistan. Following the Afghanistan conference in Bonn in 2001, Germany took the leading role in training Afghan police. German specialists have trained more than 30,000 police since then and it “was a big help” said Interior Minister Muhammadi, but “this has to go on for a long time to be effective in the long term,” he said.

President Karzai and all the ISAF countries are sticking to the withdrawal plans. They want the world to see that the international mission in Afghanistan is temporary and not long-term.

The final day of the Munich Security Conference turned to Afghanistan on Sunday with Foreign Minister Guido Westerwelle guaranteeing Germany's continued support as Afghanistan continues on its path towards democracy. (06.02.2011)

Afghan President Hamid Karzai has inaugurated a new parliament in Kabul. He swore in the lower house's 249 members and asked them to set aside their differences for the sake of the country. (26.01.2011)

A number of lessons learned from assisting the Colombian army in its fight against its own domestic insurgency could help the US prepare Afghan forces more efficiently for the fight against the Taliban, analysts claim. (20.01.2011)