New permanent exhibition at Auschwitz-Birkenau to open | Europe | News and current affairs from around the continent | DW | 03.06.2015

The Auschwitz Museum has long relied on the belongings of those murdered in the camp's gas chambers to depict Nazi atrocities. Now, 70 years after liberation, a new permanent exhibition is in the works. 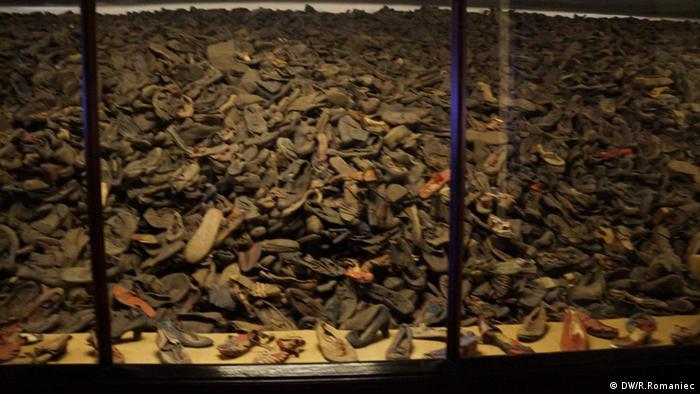 A new exhibition at the Auschwitz-Birkenau concentration camp will be divided into three parts: One will focus on the mass murder of Europe's Jews, another looks at the perpetrators, and the third presents the lives of the prisoners. As such, the exhibition will offer insights into areas that the museum had thus far only touched upon - if it looked at them at all.

The main exhibition, which was initially mounted in 1947, was given an overhaul in 1955. Since then, display cabinets containing the hair, shoes, glasses and suitcases of those murdered have served as powerful reminders of Nazi cruelty.

The walls of some of the camp's huts are hung with photographs of those held in "Auschwitz I," which was primarily used to house political prisoners, and there is a model of Auschwitz-Birkenau, the largest of the Nazis' extermination camps, in its entirety. At least 1.1 million people were killed there.

Attached to Auschwitz I and Auschwitz-Birkenau - a sprawling area housing huts, gas chambers and crematoria - was Auschwitz III Monowitz, an industrial area where the Nazis helped companies such as I.G. Farben turn a profit. Clothing and gold were extracted from the teeth of murdered Jews, Sinti and Roma, and political prisoners, and even their hair was used to generate money that would eventually land in Germany's coffers.

More than one death camp

The Majdanek, Treblinka, Belzec and Sobibor camps also adopted a conveyor belt approach to murder. Elsewhere, in concentration camps such as Ravensbrück, Dachau, Buchenwald and Mauthausen, people were systematically killed by hard labor, torture, starvation and other means.

And then there were the mass-shootings. Babi Yar near Kyiv and the Ponary massacres near Vilnius, to name but two.

Although the Nazi murder machine was active across Europe, Auschwitz has become symbolic. Nowhere else were so many people killed in such a horrific way in such a short space of time.

To date, the museum at Auschwitz has explained these facts on info panels mounted on the walls. More modern approaches such as film, computers and original audio recordings of victims are yet to become a feature of the main exhibition at the former camp.

Since 1960, several huts in the sprawling complex have housed "national exhibitions" serving as reminders of victims from different countries. They have been extended over the past years, and are, in part, highly modern.

The museum's Facebook page, active since 2009, has more than 185,000 fans. Equally, more than 1.5 million people visited the concentration camp last year. Yet the main exhibition had not been changed for 60 years.

Located 3 kilometers (2 miles), the Nazi death factory Auschwitz-Birkenau is at risk of crumbling. The ruins of the crematoria and gas chambers, which the Nazis blew up before the end of the war, are exposed to the elements, and money for their upkeep is scarce.

In 2009, the Auschwitz-Birkenau Foundation was set up to collect international donations to help finance necessary maintenance and restoration work. The charity has received pledges of 120 million euros from EU states, the US, Turkey, and Germany - which promised 60 million. But years have passed without any sign of the money.

Now, though, thanks to a pledge from Poland's Culture Ministry, the funding for a new exhibition at the museum appears to be in place. It will cost about 25 million euros ($28 million) to pull off, and it won't be going up overnight. Preservation guidelines governing the camp mean that construction work on the former inmates' huts will be a slow process. The exhibition is not expected to be finished for 11 years.