New German Pride is Nothing to Hide

DW-WORLD.DE's readers praised Germany's newly found sense of patriotism, thanks to the World Cup. But they were less supportive of Germany's continued resistance to banning smoking in public places. 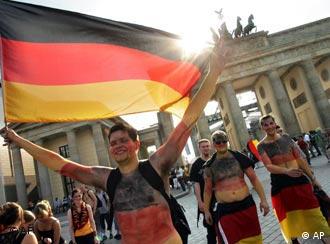 I see no reason whatsoever why Germans should be uncomfortable or even embarrassed about flying the national colors during and after the World Cup. You are a great nation and you should be proud of your identity. There are some who would like to keep German people in the degrading state of permanent historical guilt by constantly reminding them of Auschwitz and Hitler. The problem with this argument is that today…nobody has moral authority to blame one particular nation for its past misdeeds, neither the US, nor Britain, nor France, nor Russia or Israel. All I have ever experienced of Germany was beautiful cars, fantastic roads and pretty houses, excellent beer, a sense of order and taste, friendly people and quality in practically everything. Trust me, most of my friends would say the same thing. -- Nick Lipski Warsaw, Poland

Nationalism is a very interactive and complex subject. The nationalism of the 1930s and 1940s was an example of a people being manipulated by an elite. And it is dangerous for a people to let their self-identity be determined by an elite class even if that class is seen as benign. The nationalism of a people expressed through the event of the World Cup is an honest love of country, history, culture. It comes subjectively and inductively from the people themselves rather than deductively and objectively through propaganda. The healing nationalism that Germany is displaying is a tonic for us all. -- Jim Ritchey, Cincinnati, Ohio, US

I am an Englishman who has spent much time in Germany and I think that it is great that Germans are now showing their pride in being German once again. For far too many years, Germans have almost been embarrassed to show any patriotism at all. Germans have a great deal to be proud of - the country, industry, reunification, beer, football, Lufthansa and much else. Long may it continue. -- Christopher Lamb

People should never feel ashamed to display their flag or any other symbol of love and respect for their nation. I have many German friends, all of whom I love dearly. Some are truly my extended family. I wish Germany and her people the best of luck in the World Cup, and continued success as a great nation! Be proud my friends! -- Veril Scott, Arlington, Virginia, US 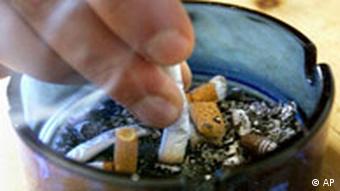 Visitors to Germany would appreciate it if more people would butt out, readers say

When my wife and I visit relatives in Germany, we dread going into restaurants and public places, as we are both extremely sensitive to second-hand smoke. When will Germany take the step (as did Ireland) to clear the air in such places? What about the health of the unborn, the young, and the employees of such places? We plan to return to Germany next year, but would spend many more euros if we could frequent smoke-free establishments. -- posselth

Having lived in Germany for almost a year, I must admit I am still dumbfounded by the consumption of tobacco in this country. It seems like an ingrained part of German life, whereas in Canada, where I used to live, it is now almost solely the habit of social pariahs or the lower classes. It has been effectively demonized in North America, so much so that I thought the restrictions went too far. Having lived in a smoker-friendly country for awhile, I have to agree with the restrictions, as it has no redeeming qualities and is an irritant and health hazard. People's freedom to partake in a personal pleasure should be restricted to private venues. The ashtrays in German video stores say a lot about this country. It is 20 years behind the times when it comes to smoking. -- D. Nordman

I don't believe that any form of advertising should be banned. I live in the United States, and watched as politicians banned advertising, but people still smoke. Advertising is just that. Nobody is forcing you to go and smoke, just like all the ads I see for foreign cars don't force me to buy them. (no offense to the home of BMW and Daimler.) -- Jerry Lambert, US

The self-confidence shown by Germans at the World Cup is an expression of a new and healthy patriotism, according to several politicians. The Catholic Church has welcomed a "commitment to our country." (June 18, 2006)

Protecting public health is the right thing to do, but the EU's tobacco advertising ban is the wrong way to go about it, says DW's Karl Zawadzky. (June 20, 2006)

Bowing to pressure coming from the European Court of Justice regarding the EU tobacco advertising directive, Germany is planning to introduce its own bill that would outlaw the advertising of tobacco products. (June 14, 2006)