Wolfsburg is a rather young city. Although it's not known to be particularly exciting it is recognized throughout the world as the headquarters of VW. Wolfsburg and its car industry are the focus of a new exhibition.

Presenting an entire city as a living exhibition, especially a young city like Wolfsburg, poses a major challenge for even the most creative museum curators. Nevertheless, Ralf Beil, the new director of the Wolfsburg Art Museum, has accepted that challenge, saying that Wolfsburg is the best place to showcase all aspects of life in German in one place:

"German culture is concentrated here in Wolfsburg as if it were in a pressure cooker," Beil says. His imagery, a clear reference to the different roles the city has taken on throughout its short history, including its significance for the Third Reich, the economic success of the 1950s as well as its new identity as a self-professed "event city," amounts to more than just a nod at industrial art.

For Beil, Wolfsburg is exemplary for many German cities; especially seeing that Wolfsburg, like many urban areas in Germany after World War II, lacks a picturesque façade. In Wolfsburg, the function of the city is its main selling point, which is reflected in the title of the exhibition: "Wolfsburg unlimited - a city as a global lab."

Not a pretty face

While preparing the exhibition, Beil and a number of international artists explored the question of what really constitutes the essence of a city. In the case of Wolfsburg, it is a place that deliberately lacks a pretty face and foregoes placing any value on presentation. Some might call it a "soulless" city, but the exhibition goes to show that there is plenty that Wolfsburg can be proud of.

The exhibition starts out with the "Hall of Fame," where famous citizens of Wolfsburg, including lyricist Heinrich Hoffmann von Fallersleben, who wrote the lyrics to the German national anthem, are being honored. The city even named suburb in his honor later.

After this excursion into the kind of cultural history, which Germany can pride itself with, the next hall shocks visitors with the more disgraceful side of the city and its role during the Third Reich, when it served as a showcase of Nazi city planning. 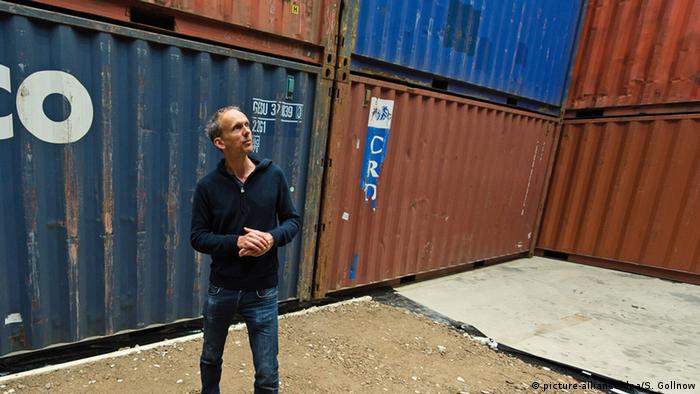 Artist Julian Rosefeldt stands in the middle of his installation in the Art Museum of Wolfsburg.

In 1938, Adolf Hitler personally laid the foundation stone of the Volkswagen factory in what was to become Wolfsburg, introducing the idea of the so-called "KdF" car (an acronym that stood for '"Kraft durch Freude" which loosely translates as "strength through joy"). One year later, Germany started World War II, placing the production of the KdF models largely on hold; they were only to be mass-marketed after the end of the war, reinventing them model as the VW Beetle - and becoming a runaway success.

In order to accommodate all the workers contributing to this growing success, a new city needed to be built nearby from scratch, which grew into present-day Wolfsburg. There are only few other places anywhere that are so closely associated with the name of a huge company like Wolfsburg is.

But the exhibit doesn't shy away from examining contemporary themes either. VW's cheating during emissions tests revealed in 2015 is also part of the show, since the subject appears to have become one of the main talking points in the city, which serves as VW's de facto headquarters.

Among other things, there's a piece of installation art featuring a video clip of former VW boss Martin Winterkorn in reaction to the scandal. Beil points out that it imitates the style of North Korean propaganda videos.

Another art installation called "Midwest" by Julian Rosefeldt looks further into the future of VW's hometown. It features a rundown drive-in movie theater with cargo containers piled up to the ceiling. Weeds have found their way through its concrete floor, sprawling between abandoned cars. On the screen there's a short-film, produced by Rosefeldt himself, depicting a gangster drama, with cars driving back and forth in the movie, but unable to get a move on.

Rosefeldt explains his motivation behind his work: "I've been to Detroit twice, where I noticed many analogies to Wolfsburg since the crisis began."

Museum director Beil adds: "We wanted to present reality, including its dirty laundry."

Wolfsburg is more than just an automobile hub.