Nigeria has banned the transport of corpses over national and state borders. This comes a day after Guinea closed its borders to Sierra Leone and Liberia in a bid to halt an Ebola outbreak that has killed more than 900. 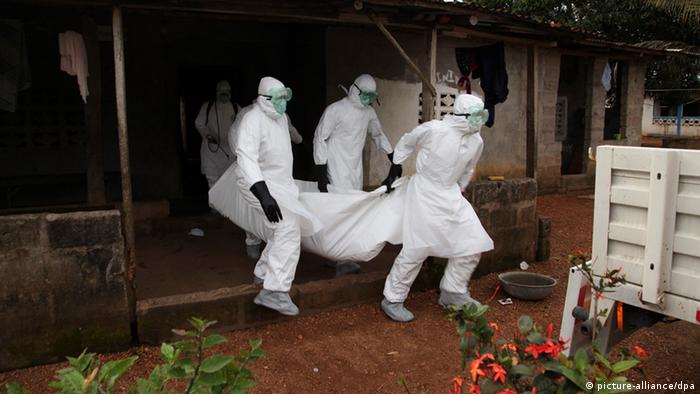 The newspaper Leadership reported Sunday that Nigerians would have to bury Ebola victims in the communities where they die. So far, two people have died in Nigeria of Ebola, which is spread through blood and other bodily fluids and has an overall fatality rate of 90 percent.

"Henceforth dead bodies will not be allowed to be transported from one part of the country to another," Dr. Khalliru Alhassan, the second in command at the Health Ministry, said Saturday in Kano, according to the newspaper.

Seven people are known to be infected in Nigeria. Six cases remain unconfirmed. About 70 people remain under surveillance.

Ebola, which causes hemorrhaging and has no vaccine or treatment, has killed 900 people this year in Guinea, Sierra Leone and Liberia (pictured). On Friday, the World Health Organization declared the current outbreak of Ebola an international emergency.

A 40-year-old who died in Jeddah after returning from Sierra Leone did not have Ebola, Saudi Arabia's Health Ministry announced on Saturday. According to officials, samples submitted to the US Centers for Disease Control and Prevention and a laboratory in Germany had come back negative for the Ebola virus. Saudi Arabia will not issue visas to Mecca pilgrims from Sierra Leone, Liberia and Guinea this year.

A patient in Canada has also tested negative, according to the province of Ontario's Health Ministry. Doctors put the man into isolation after he showed Ebola-like symptoms and ran a fever upon landing from Nigeria.

In Madrid, doctors will treat the priest Miguel Pajares - infected in Liberia and the first known Ebola carrier on European soil during the current outbreak - with the experimental drug ZMapp, Spain's Health Ministry announced on Sunday. Doctors have determined that the 65-year-old Spanish nun Juliana Bonoha Bohe, who worked at the same hospital as Pajares in Liberia, does not have Ebola.

The condition of two American Ebola patients improved after they received treatment with ZMapp, though it remains unclear how much of that result is correlation.

The charity Pajares and Bohe worked for had petitioned Spain for permission to bring in two African missionaries who became infected with Ebola while helping treat patients at the same hospital, but the country turned the request down. One of those two missionaries, a Congolese nun, died of Ebola on Saturday, the charity announced.

A Sierra Leonean in the German city of Hamburg has tested negative, the news agency dpa reported on Sunday. Doctors have released the man, admitted on Saturday afternoon with a fever and vomiting.