Will Chile vote for a new constitution — and a new beginning? | Americas| North and South American news impacting on Europe | DW | 24.10.2020

Will Chile vote for a new constitution — and a new beginning?

On Sunday, Chileans will go to the ballot boxes to decide whether they want to replace the Pinochet-era constitution, or not. Those pushing for change are hoping reforms will address growing social inequalities.

A new constitution for Chile?

Chileans to decide fate of constitution

Last autumn, hundreds of thousands of people took to the streets of Chile in what was the biggest wave of anti-government protests the country has ever seen. The demonstrations, which lasted for weeks, were sparked by a hike in subway fares but soon morphed into an all-out rejection of social inequalities and the country's neoliberal policies.

Center-right President Sebastian Pinera was able to quell the mass unrest by pledging to hold a referendum on a new constitution in April. But that poll had to be postponed because of the coronavirus pandemic, and is now due to take place on October 25.

The referendum is generally regarded as the most important vote in Chile since the end of the right-wing military dictatorship of General Augusto Pinochet and the return to democracy in 1990. More than 14 million people are being asked to decide whether the existing Pinochet-era constitution should be overhauled. And, if the opinion polls can be trusted, more than two-thirds of the population is expected to vote yes.

Many Chileans see the current constitution as deeply flawed. "It lacks fundamental social rights, for Indigenous peoples in particular," said political scientist Gabriel Negretto, a former adviser to the United Nations. "The constitution was also constructed in such a way that it limited state intervention to a minimum and privatized the social welfare system."

Why police violence is rife in Latin America

Why police violence is rife in Latin America

"You shouldn't forget that Chile's neoliberal constitution also brought about considerable economic growth and the creation of a new middle class," said Negretto, who lectures at the Pontifical Catholic University of Santiago de Chile and at the "Center for Research and Teaching in Economics" (CIDE) in Mexico. "The paradoxical thing is that, to a large extent, it is precisely those people who are now dissatisfied and are taking to the streets."

Negretto said many Chileans feel exploited — with some working seven days a week while getting very little from the state in return. "The state missed the opportunity of carrying out really deep-seated reforms even after democratically-elected governments took over from Pinochet," he told DW.

There were amendments to the constitution over the years that boosted the role of political parties to some degree and downgraded the importance of the military. But, at its heart, it remained fundamentally unchanged. Many Chileans have objected to the privatization of public utilities like water, but also to the fact that much draft legislation in the Chilean parliament requires more than a simple majority to be passed — in contrast to many other democratic nations. This means that many political problems end in an impasse. 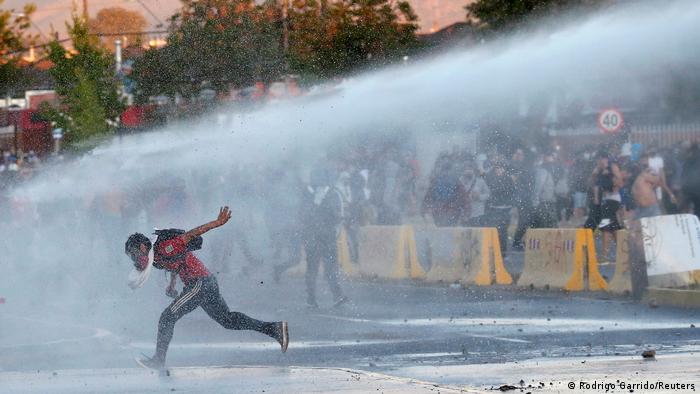 What happens after the referendum?

Chileans will not just be deciding on a new constitution — at the same time, they will be determining the structure of the committee that would draw up the document. "They will choose between having a committee composed of members exclusively elected by the people, or one made up, in part, by lawmakers and, in part, by members elected by the people," explained Negretto.

If Chile opts for a new constitution, this constituent assembly is slated for election in April 2021. Its members would then have a year to draw up the document in which so many Chileans are investing so much hope.

While the protests for social justice and a new constitution were partially interrupted by the coronavirus pandemic, tens of thousands of people took to the streets of the capital, Santiago, last Sunday to mark the start of the mass protests a year ago.

Many have condemned police brutality during the rallies — at least 30 people lost their lives and thousands were injured at the height of last year's protests — and they are calling for the matter to be addressed in any new constitution.

But can a new constitution really lead to a more just society and a more socially conscious state? After all, it will only codify such fundamental issues as the structure of the state and the most important rights and duties of its citizens. It's not the place for concrete measures like a pension reform or an increase in the minimum wage.

"Of course, a new constitution will not be enough in its own right. Further reforms will have to follow in its wake, as well as political actions that live up to the new principles," said Negretto. "But the constitution is a first — and imperative — step."

Negretto said the Chilean state needs a new structure, if it is to change its self-image and to introduce more civil liberties. This, he said, isn't just a question of the legal ramifications — a new constitution symbolizes the cornerstone of a new Chile.

Chileans to decide fate of constitution