New Book Sheds Light on US Space Dreamer's Nazi Past

German-US rocket engineer Wernher von Braun developed the Saturn V launch vehicle that put the first man on the moon in 1969. But he could never escape his Nazi past, according to a newly published biography. 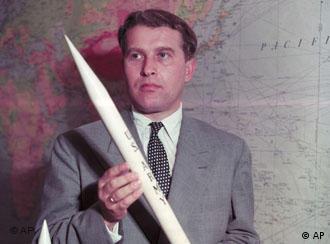 Von Braun had been obsessed with space rocketry since childhood

He was a giant of the space age in the 20th century, and best known to postwar baby boomers for selling the idea of interplanetary travel on Disney television shows across North America. Born to Prussian aristocrats in 1912, Wernher Magnus Freiherr von Braun was obsessed with spaceflight as a boy and became the Third Reich's wunderkind technocrat whose infamous V-2 rockets rained over London and Antwerp during World War II, killing thousands of civilians.

But it was the use of slave labor to assemble those V-2s that has led critics to brand him as a war criminal. Over 20,000 died in the underground plants at Dora-Mittelwerk, south of the Harz Mountains and elsewhere in the Reich's eastern territories. When it became clear that Nazi Germany's days were numbered, von Braun surrendered to the US occupying forces. The army's top brass had valued his technical leadership for the V-2 so highly that they ignored von Braun's SS membership and ties to Hitler's inner circle. In a covert operation called Project Paperclip, they evacuated the German V-2 team to Fort Bliss in Texas to work on the Pentagon's emerging guided missile program. 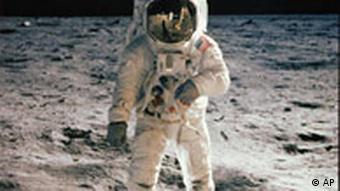 Von Braun's crowning achievement was the Apollo moon landing in 1969

In 1957, the Soviets launched Sputnik, the first man-made satellite in space, thereby shattering America's sense of invulnerability. Three months later, the US countered with von Braun's Explorer I, and the space race between the two mighty Cold War adversaries was on. Little more than a decade later, von Braun realized his boyhood dream on July 20, 1969 when Apollo 11 astronaut Neil Armstrong walked on the moon. Von Braun died of cancer in 1977.

DW-WORLD.DE spoke to Michael J. Neufeld, 56, the author of "Von Braun: Dreamer of Space/Engineer of War" about the man, who has been either vilified as a Nazi scientist or glorified as a space pioneer. The reality, according to Neufeld, who is also chair of Space History at the Smithsonian's National Air and Space Museum in Washington DC, is not quite so black and white.

DW-WORLD.DE: You were a space buff and von Braun fan watching those Disney shows when you were younger. How has your perception of the man evolved over the decades?

In the late 1970s, there was a rising consciousness about the Holocaust. Then the memoirs of a French resistance fighter, who survived the Mittelwerk-Dora labor camp, were translated into English and shed light on the horrors of the V-2 rocket program. But the turning point was when the Arthur Rudolph case broke in 1984.

Arthur Rudolph was the former production chief of Mittelwerk-Dora, who emigrated to the US with von Braun and became the project director of the moon rocket Saturn V.

Yes. Eli Rosenbaum, a junior lawyer in the US Justice Department's new Nazi hunting unit, had access to the Project Paperclip records and Rudolph was the best case they had to prosecute. In the end, rather than face a deportation hearing, Rudolph renounced his US citizenship and "voluntarily" left for West Germany. Luckily, von Braun was no longer alive to face charges himself, but his posthumous reputation was severely damaged.

How was von Braun any different from his good friend Rudolph? 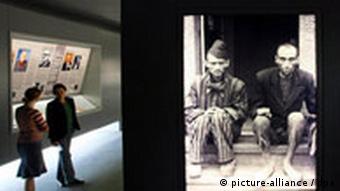 Over 20,000 slave laborers who assembled the V-2 rockets perished

Rudolph was a true Nazi believer. He had been a party member since 1931, and the nature of his job at Mittelwerk-Dora meant that he had much more involvement with concentration camp labor than von Braun. Von Braun was a Mitläufer, a fellow traveler, who joined the SS to further his career. He didn't exactly embrace the regime and there was no evidence of him being an anti-Semite, but he was happy to overlook the downside of a totalitarian state because it had served him so well. Von Braun was consumed by rocketry and an ambition to go into space, so he made this Faustian bargain with the Third Reich. They said: "We give you the money, power and resources to build your rockets and you do it for our purposes."

When it was clear Germany was going to lose the war in the summer of 1944, your book quotes von Braun saying that he suddenly realized that he "might be aiding an evil regime." Rather late, wasn't it?

Yes, but only in hindsight. We have a different historical perspective today. One needs to understand the motivations of the historical players at the time and see their world view back then. The breaking point for von Braun was towards the end of the war when he was arrested by the Gestapo, and became the target of the regime's repressive tactics himself.

He was arrested for off-the-cuff remarks he made at some party that brought into question his loyalty to the Führer, something that his PR handlers played up later in the American phase of his life. But his V-2s killed thousands in London.

The moral controversy about von Braun is misplaced. The Anglo-American bombers killed many more civilians than the V-2 did. This was war. The issue is what kind of moral compromises he made knowing the kind of regime he was serving. Von Braun was so opportunistic.

Something that became evident at the end of the war when he switched sides ...

Germany was dead in 1945, so one's perspective changes rapidly.

The US wanted von Braun badly enough to overlook his Nazi past. Why was he so valuable to the US military? 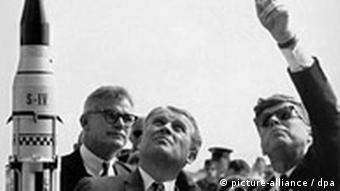 Von Braun (middle) focused on the space race to the moon under US President John F. Kennedy (right)

Von Braun was a brilliant engineer and visionary, but his biggest talent was in directing and mobilizing huge engineering teams like the maestro of an orchestra. Rocket technology was at the cutting edge of guided missile work and became a major part of the US weapons development program. The Americans picked up on the V-2 technology and ran with it.

To what extent did von Braun's family cooperate with you on the biography?

His widow and children won't talk to any historian or journalist. The German children of von Braun's elder brother, Sigismund, on the other hand, were very forthcoming. This might have to do with the fact that Sigismund was an anti-Nazi in a quiet way. During the war, he was Germany's consul in the Vatican, a neutral state during the war, and he took considerable risks in issuing exit visas to Jews seeking to escape the Nazi-occupied areas in northern Italy.

There have been so many biographies of von Braun in German and English. Why yet another one now?

My blunt opinion is that the other bios are either poor or lacking in balance. They're either virulently anti-Braun or worship him as a hero -- all very black or white.

So was von Braun an apolitical scientist or a Nazi war criminal?

I didn't want to overwhelm the reader with a heavy handed message. You draw your own conclusions.

The Simon Wiesenthal Center is extending a campaign to search for aging Nazis to South America, where investigators said they believe Aribert Heim, one of the most sought-after suspected war criminals, is hiding. (27.11.2007)