New Australian football jersey not made in women's sizes

Both the men's and women's national team's new kits were unveiled on Friday, but replicas of the women's away shirt won't fit women. At least one player expressed her dismay. 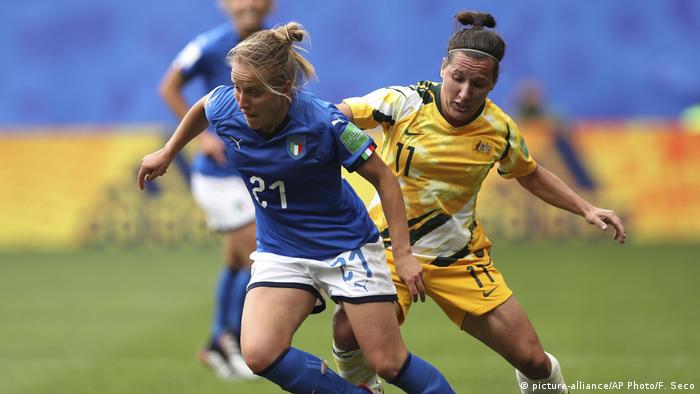 The Australian women's football team got new jerseys Friday, but the replica away kit for fans will not be available in women's sizes.

Sportswear company Nike made the kits for both the men's and women's teams, which debuted earlier this week.

Some members of the women's team sporting the kit at the launch. However, fans won't be able to get their own replica away jersey and will have to make do with the men's.

The official team Twitter page stated that they "apologize for any inconvenience caused and can assure supporters that this will be rectified for the next kit release due in 2022."

Elise Kellond-Knight, a midfielder who competed in the latest edition of the Women's World Cup for the Matildas, was not thrilled about the news in a recent tweet.

Australia made it to the round of 16 during last year's FIFA Women's World Cup. They are currently ranked seventh in the world by the world football federation FIFA.

Members of both national teams will be paid the same amount and have access to similar training facilities.

Previously, the men's team was paid at a higher rate. The men's team is currently ranked 41st in the world, tied with Iceland.

French champions Lyon have made it five Champions League titles in a row after a 3-1 win over Wolfsburg on Sunday. Alexandra Popp gave the German side second half hope but this was their third final loss in five years.

Brazil’s football governing body has announced that it is adopting an equal pay policy for both women’s and men’s football, becoming one of the first countries in the world to do so.

Why does the Women's Bundesliga look increasingly like the Bundesliga?

Bayern Munich, Wolfsburg, Barcelona, Lyon, Manchester City. The clubs at the top of women's football in Europe are looking increasingly like their male counterparts. Until recently, Germany was different, why change now?