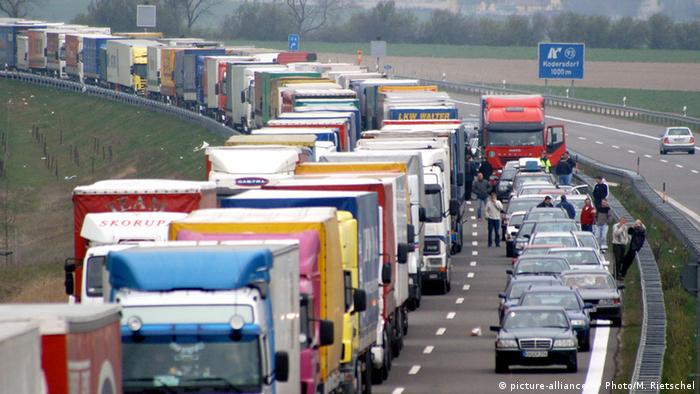 The amount of illegal and unreported nitrogen oxide emissions from diesel cars, trucks and buses may be higher and deadlier than previously estimated - and governments must take action now, according to a report released Monday.

The meta-analysis, which examined data from 30 studies, found that excess nitrogen oxide - meaning that which is over and above regulatory limits - was linked to 38,000 premature deaths around the world in 2015.

And researchers warn that the number of people dying due to diesel nitrogen oxide could grow to more than 180,000 in 2040 if governments don't take action.

Nitrogen oxide or NOx is a key contributor to air pollution in the forms of smog and fine particulate matter. Long-term exposure to NOx is linked to stroke, heart disease and lung cancer.

Illegal emissions cause thousands of deaths

The analysis, co-authored by the International Council on Clean Transportation, looks at markets in Australia, Brazil, Canada, China, the European Union, India, Japan, Mexico, Russia, South Korea, and America. Taken together, these regions produced more than 80 percent of new diesel vehicle sales in 2015. 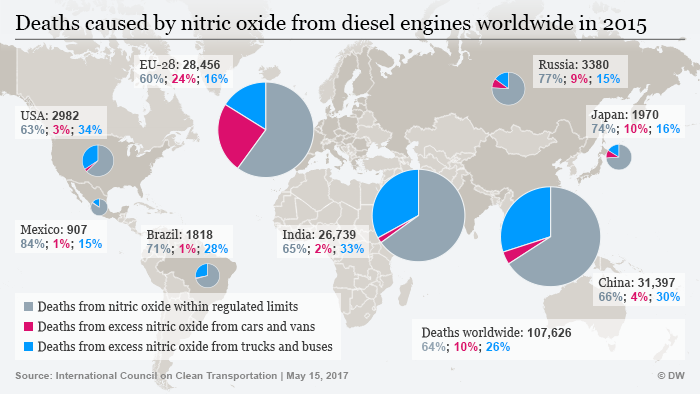 According to the report, around 107,600 premature deaths in 2015 were related to nitrogen oxide from diesel emissions emitted across these regions.

China suffered the most deaths due to diesel nitrogen oxide, with around 31,400 recorded - two-thirds of these stemmed from allowed emissions.

The EU followed, with a total of 28,500 deaths due to diesel nitrogen oxide. It also reflected the highest proportion of deaths from illegal emissions, with nearly a quarter of these dying due to excess emissions.

India was also badly affected, with 26,700 deaths due to diesel nitrogen oxide. It had among the smallest proportions of deaths due to cars and vans.

Commercial trucks and buses were responsible for most excess emissions around the world - 76 percent of the total - the report found. But emissions from cars, trucks and vans are a problem too, and account for six out of every 10 premature deaths in the EU.

The EU has the biggest problem with illegal and unregulated emissions.

Anenberg said that in Europe, "the ozone mortality burden each year would be 10 percent lower if nitrogen oxide emissions for diesel vehicles were in line with certification limits."

This would fall to 20 percent lower with more stringent next-generation standards, she added. 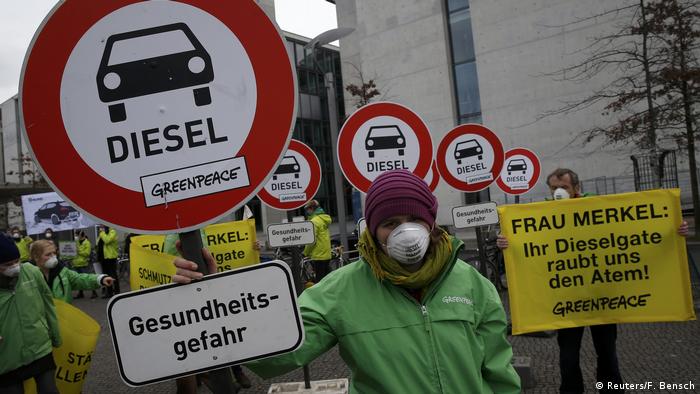 Following the Volkswagon "Dieselgate" scandal - where the German carmaker admitted to rigging millions of diesel vehicles worldwide in a bid to thwart emissions tests - diesel car emissions are under public scrutiny in the EU.

Emissions from other carmakers have also been found to have exceeded legal limits.

The European Environment Agency (EEA) says it estimates around 70,000 premature deaths occur every year in Europe due to nitrogen dioxide air pollution.

And more than half of all member states report levels of nitrogen dioxide air pollution higher than the EU's legal limits.

"This new study importantly shows that the EU is among the most-affected global regions," Martin Adams, head of air pollution, transport and noise for EEA told DW.

In some EU countries, implementing stringent rules could improve the situation, said Peter Mock, ICCT managing director for Europe. All countries should work to enforce the equivalent of the Euro VI standard for heavy-duty vehicles, he believes. 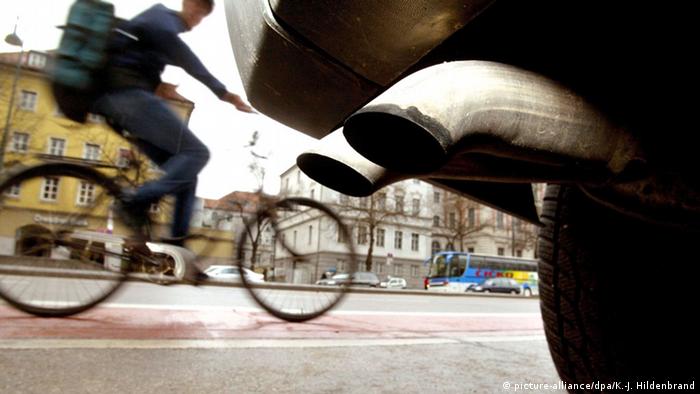 But in Europe, where Euro VI is already in place for heavy-duty vehicles, it's most important to implement a strong real-driving emissions program, he said.

The findings of the report demonstrate the need to act now. Sheila Watson, deputy director of the FIA Foundation, which runs the Global Fuel Economy Initiative, said it's essential we reduce the toxic emissions of vehicles "which are causing real harm to the health of thousands of people every year."

Jennifer Wang, global coordinator of the Healthy Energy Initiative, says that the results have policy implications for other sources of air pollutants, such as power plants. There is a clear "need to fully enact and enforce regulations on emissions in order to protect public health."

"It provides data that we missed have so far in the discussion," he told DW.

Environmentalists have won a legal battle to force the UK government to publish an air pollution report ahead of the June election. PM Theresa May had wanted to wait until after the political dust settles. (28.04.2017)

German media has reported that Berlin will reject an EU proposal calling for stricter controls over emissions tests. Environmental groups have accused Berlin of putting its commercial interests ahead of its citizens. (25.04.2017)