European central banks have started circulating a new 10-euro banknote. The second generation of eurozone money has a number of enhanced security features, making it harder to forge. 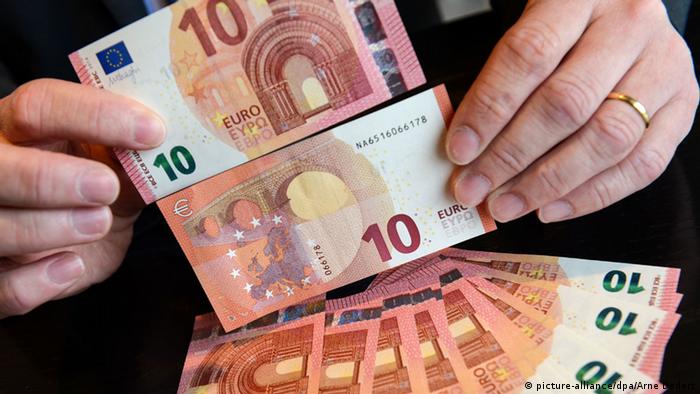 As of this Tuesday, consumers across the 18-member eurozone have to get used to a new 10-euro bill, the design of which was presented as early as January this year.

Central banks in the bloc have started circulating the new bills, emphasizing the banknotes' more durable structure. But no doubt the main reason for issuing the new 10-euro bills is to make them safer - that is harder to forge.

In the first six months of this year, well over 330,000 forged euro banknotes were discovered across the Continent. Feel, look and tilt are the European Central Bank's mantra for checking the new notes. Inks change color according to the angle of light, and there is a built-in hologram which bankers say will make life much harder for fraudsters.

The new 10-euro bill follows the introduction of a second-generation 5-euro banknote which has been in circulation since May 2013. The old notes are still valid and will be phased out gradually.

How well do eurozone consumers know their currency?

Banking officials said this time around, ticket machines had been updated in advance to avoid a repeat of the technical glitches the introduction of the new 5-euro bill caused a year ago.

Over the next couple of weeks, some 4.3 billion new 10-euro banknotes will hit Europe. A new 20-euro bill, also with enhanced security features, is expected to see the light of day in early 2016.