Pro-European parties in the Netherlands are predicted to win most of the country's European Parliament seats, exit polls show. Dutch voters were among the first to take part in four days of voting across the continent. 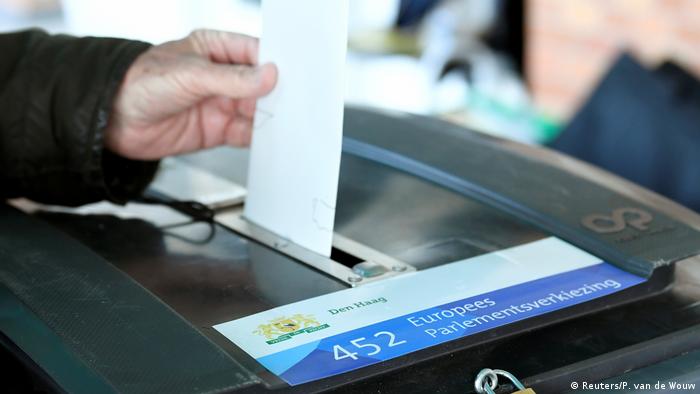 The Labor party of European Commission Vice-President Frans Timmermans looked set to win five out of the 26 seats allocated for the Netherlands, according to the Ipsos poll for the Dutch public broadcaster NOS.

"There is a clear majority of people in the Netherlands, if you count them altogether, who want the European Union to continue playing a role in tackling problems that need to be solved," said Timmermans, who is the lead candidate for the European Parliament's social democratic grouping.
Dutch Prime Minister Mark Rutte's Liberal party was set to win four seats, as was its coalition party, the Christian-conservative Christian Democratic Appeal (CDA).

Euroskeptic parties were predicted to fall well short of expectations. Official Dutch results were, however, not due to be released until after Europe's polling as a whole wraps up on Sunday.

However, DW's Bernd Riegert in Amsterdam stressed that these were still exit polls and that it was too early to call it a Europe-wide trend. "There are different stories and different campaigns in each of the 28 member countries. So it is hard to predict an outcome," he said.

Drift from Wilders to Baudet?

In the Dutch projections, Thierry Baudet's right-wing populist Forum for Democracy (FvD), standing for the first time, looked set to win three seats. However, these appeared to be at the expense of the anti-Islam Party for Freedom (PVV), led by populist lawmaker Geert Wilders, which lost three of seats.

The two parties had previously been expected to gain five seats apiece — at the expense of mainstream parties.

Dutch elections generally see a large number of parties vying for shares of the vote. Seat numbers are generally low for each party, with 13 different groups represented in the 150-seat national parliament.

Exit polls for the United Kingdom, the only other country taking part in Thursday's segment of the four-day European elections, were not available due to British election law.

However, reports surfaced that a significant number of non-British EU citizens living in the UK had been denied a vote.

The UK's Electoral Commission claimed that the government's decision to postpone Brexit — and thus take part in the election at "very short notice" — had caused the chaotic situation.

More than 400 million European voters are eligible to take part in elections for the 751-strong European Parliament. First results are expected late on Sunday, once voting in the 28 member states has finished.