Julia Klöckner appeared in a video praising Nestle for cutting sugar and fat in its products. Many criticized her for what they called a "PR stunt" and not confronting the firm over its environmental record. 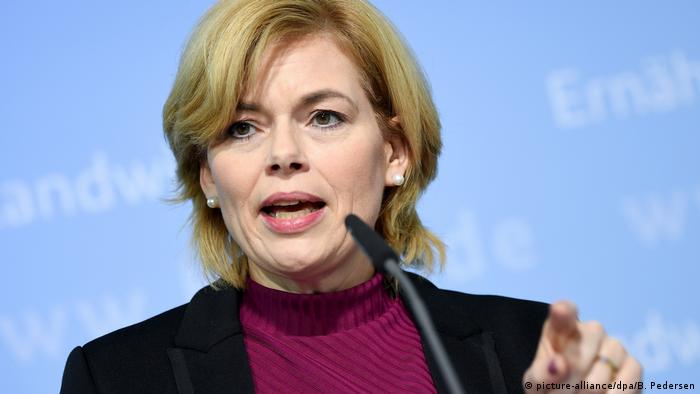 German Agriculture Minister Julia Klöckner came under fire this week over a video that her critics have called an advertisement for Swiss food conglomerate Nestle. In the clip, Klöckner congratulates Nestle Germany leader Marc-Aurel Boersch for the company's initiative to reduce fat, sugar and salt in its products.

"Eating and drinking are important," the conservative Christian Democrat (CDU) minister said, "but the question is: Is it compatible with the environment and good for our health? That's why I was glad we could talk about Nestle's philosophy today."

The video was part of a wider strategy launched last year between the German Agriculture Ministry and the country's food industry in which the latter agreed to voluntarily reduce the amount of sugar, salt and fat in processed foods by 2025.

"First, Klöckner let lobbyists argue away the sugar tax and the food rating system, and then she participates in a Nestle PR event," Lauterbach said.

German YouTuber Rezo also criticized the video. He recently made headlines in Germany after his video calling on voters to not cast their ballots for Germany's centrist parties in the EU elections was watched more than 12 million times, prompting the leader of the CDU, Annegret Kramp-Karrenbauer, to criticize his clip as biased "propaganda."

"Fun Fact: If I'd posted this exact tweet with a video just like this one, I'd have had to mark it as an #advert," Rezo tweeted.

Most responses to the video on social media either mocked Klöckner for the video or disparaged her response to critics, whom she called "hatespeaker," an apparently literal translation of the German word "Hassredner."

The Chairman of the German Council for Public Relations, Lars Rademacher, told DW that the criticism was "foreseeable."

"It's difficult to understand why the agriculture minister is getting involved in such a public display. At the very least, it lacks instinct or is naive. Ms. Klöckner has damaged the reputation of her office, and the criticism from political competitors is understandable," Rademacher said.

In remarks to media given Thursday, the spokeswoman for Germany's Ministry of Agriculture defended Klöckner's video, but added that the issue was being discussed internally.

Implementing the strategy for less sugar, fat and salt in foods also means "talking to everyone involved — including companies," the spokeswoman said. "If they have committed themselves to changing their products, then that's a success — and that's what this was about." 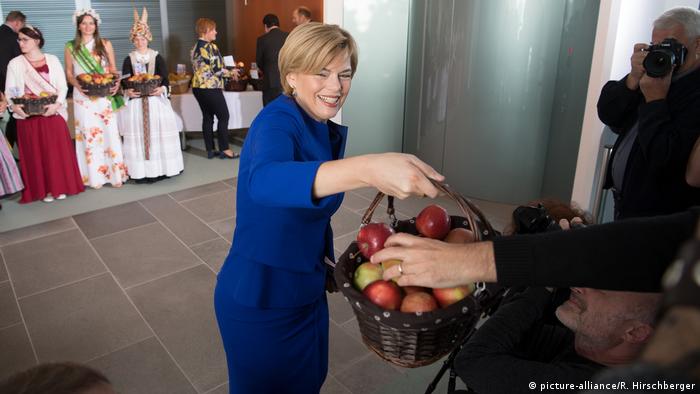 Klöckner has come under fire before for appearing to promote certain products, though these apples, part of a nutritional initiative, raised no criticism

Cozy relations of politics and industry

Lobbyism, or the representation of interest groups, is guaranteed by the German Constitution. Nonetheless, industry lobbying is often disputed in Germany, where politicians and industry figures sometimes work closely together. It's not unusual for stakeholders to contribute their views on certain draft legislation at an early state. Some members of the German Parliament also have highly paid secondary jobs across a wide range of sectors, and other held industry lobbying positions before entering the Bundestag.

This week's Nestle video was not the first time Klöckner had come under fire for cozy relations with big companies. Last year, she was labeled the "beer ambassador" after tweeting a photo of herself holding a cardboard box from a beer shipping service.

Lea Briand, spokeswoman for "Abgeordnetenwatch" ("Parliamentarian Watch"), which monitors the transparency of German MPs, told DW that in the Nestle video, Klöckner had "again missed the necessary distance to the food industry."

"Unfortunately, in the case of Ms. Klöckner, one gets the impression that the food industry is closer to her than consumer protection initiatives," Briand said.

Nestle has a highly controversial history across the globe, beginning in the 1970s when it was accused of "aggressive marketing" of breastmilk substitutes in poor countries, contributing to infant deaths. The company has also come under fire for alleged labor rights violations, including most recently in 2015, when it was revealed that its seafood products sourced in Thailand were the result of forced labor. Nestle later announced a plan to prevent labor and human rights abuses in its seafood supply chain.

The firm has also been accused by the environmental organization Greenpeace of causing massive environmental damage, including widespread deforestation for its cocoa plantations. Under pressure from NGOs over the destructive nature of the palm oil industry, Nestle has pledged to source only sustainable palm oil from 2020 onward.

A meeting of German officials to discuss the ongoing drought has failed to produce the result farmers have been hoping for. The Agriculture Ministry said it was still too early to decide on financial aid. (13.08.2018)