Neo-Nazi Sturmbrigade 44: How serious of a threat is it?

Germany has banned the extreme-right group known as Sturmbrigade 44 or Wolfsbrigade 44. Interior Minister Horst Seehofer accused the organization of aiming to "rebuild the former Nazi state." 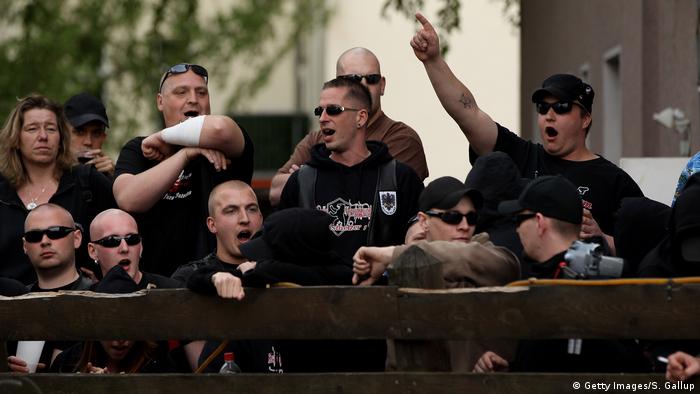 Sturmbrigade 44, Wolfsbrigade 44: The names sound militaristic — like war and aggression, like the name of an uncompromisingly fierce unit.

Members of the group wear its insignia in large white old-style German script lettered on their shirts and jackets. It is a look, a menacing style, that they wear with pride at militant gatherings. They see it as a statement, a philosophy.

For outsiders, it is certainly a threatening sight — even though many people may not be aware of the group's intent.

Read more: German government 'in the dark' about guns and Neo-Nazis

The crimes committed by the SS-Dirlewanger Sturmbrigade in World War II are so monstrous a dimension that it is difficult to put them into words. It was a "special unit" under the leadership of SS officer Oskar Dirlewanger.

In the course of the war, Dirlewanger and his men murdered tens of thousands of people. Most were unarmed civilians. They burned babies and children, raped women, and in Belarus shot every peasant they encountered.

The soldiers plundered the small village of Khatyn before locking the local people in a barn that they then set ablaze. Anybody trying to escape was gunned down. The 147 people killed included 75 children younger than 16. The village blacksmith, Yuzif Kaminsky, survived. After the SS forces had withdrawn, he found the body of his son, Adam, in the charred ruins of the barn.

Dirlewanger, who later received the SS honor the Knight's Cross, is revered by the now-banned Sturmbrigade 44. The number 4 stands for the fourth letter of the alphabet, D, so the 44 means "Division Dirlewanger."

The group does not appear to play a central role in Germany's far-right scene today. But it is believed to be well connected with other extremists. In 2019 Germany's chief federal prosecutor ordered raids on the suspicion that members of the group were engaged in the formation of a criminal association. This after they were suspected to have been involved in regional far-right rallies and smearing walls with swastikas.

David Begrich, of the anti-discrimination NGO Miteinander from the eastern state of Saxony-Anhalt, said the investigation into Sturmbrigade 44 had revealed once again that right-wing extremist sentiments and groups are rife all over Germany. "The networking they have done in the past three years has provided the basis for a radicalization and a propensity to violence against members of the migrant community and other political opponents," he told the online magazine Belltower News.

Interior Minister Horst Seehofer said banning Sturmbrigade 44 had sent a clear signal: "Any group that sows hatred and works to rebuild the former Nazi state does not belong in Germany." The December 1 order to ban Sturmbrigade 44 was the fourth time Seehofer had declared a far-right group illegal in 2020.

Despite all the well-meaning rhetoric, there still appear to be plenty of places around Germany where far-right hatred and incitement are rife. And the reverence devoted to the mass murderer SS officer is all perfectly legal under the initials "SKD," German for "Special Commando Dirlewanger." There are also plenty of right-rock bands and festivals, where the Aryan Brotherhood of prominent neo-Nazi Thorsten Heise and his followers provide security. Their emblem? Two crossed hand grenades: the symbol of the SS's Dirlewanger Brigade.