Beate Zschäpe and two other men were allegedly members of the neo-Nazi NSU cell which murdered minorities and carried out a string of bombings. The case has shocked Germany since it began in 2013. 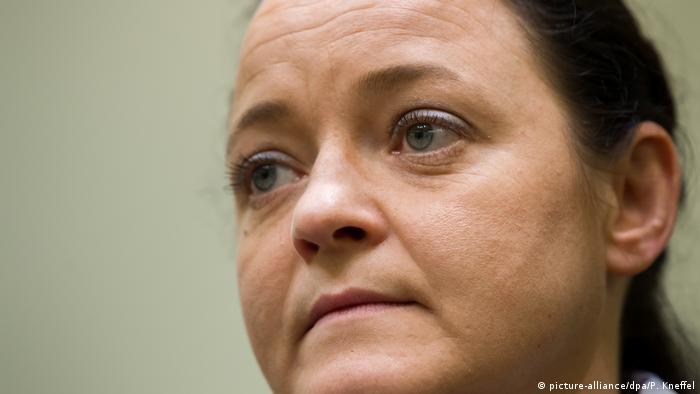 The main defendant in Germany's neo-Nazi terror trial distanced herself from right-wing extremism in her closing remarks and asked the presiding judge to refrain from convicting her as a murder accomplice.

"Please don't convict me in the place of others for something that I never wanted to do nor ever did," Beate Zschäpe said in court in Munich. Neo-Nazi ideas, she added, "no longer have any meaning" for her.

The 43-year-old from the eastern German city of Jena is believed to be the only surviving member of the far-right terror cell National Socialist Underground (NSU). She and two other men, the now-deceased Uwe Böhnhardt and Uwe Mundlos, are accused of murdering 10 people, most of them minorities, and carrying out bombings and robberies from 2000 to 2007.

Turning to the victims' relatives, Zschäpe said she could sense their "distress and despair," but did not know why Böhnhardt and Mundlos had targeted their loved ones.

"I'm a compassionate person," she said. "I'm sorry for the misery that I've caused."

The trial against Zschäpe began in 2013 after she turned herself in to police in 2011. Authorities had been unaware of the connection between the crimes until they found a video confession she had filmed shortly after Böhnhardt and Mundlos committed suicide in November of that year.

Zschäpe said she only learned "piece by piece" about Böhnhardt and Mundlos' "horrific" crimes thereafter.

'Lead a life without fear'

Federal prosecutors have demanded a life sentence for Zschäpe. Her lawyers have denied she was an NSU member and requested she be sentenced only on robbery and arson charges.

A final verdict against Zschäpe and four other suspects accused of helping the NSU is set for July 11.

"I just want one more thing," she said. "To find closure and at some point lead a life without fear."