All 486 miners trapped after a fire broke out in a South African gold mine over the weekend have been rescued. Some of the miners were trapped at a depth of nearly 3.5 kilometers. 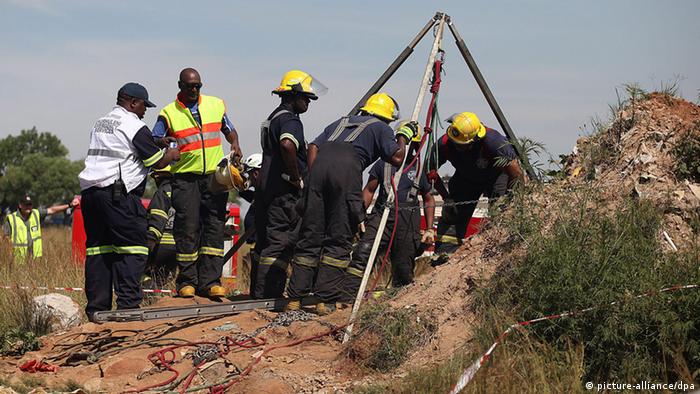 A year ago, nine miners died after an underground fire at another Harmony Gold Mine

The miners, who had been trapped by the fire, were rescued Sunday, according to officials from the Harmony Gold Mining Company.

"We are extremely grateful that all of our colleagues have been brought to surface, without injury," said Harmony Gold spokeswoman Charmane Russell. "Fortunately in this instance, things went according to plan."

The men were at work in the mine near Carletonville, southwest of Johannesburg, when a fire broke out at around 7:40 a.m. local time (0540 UTC). The miners were told to move to refuge bays within the mine.

"Our employees have been trained for this," Russell said. Rescue teams were called in to contain the fire and then moved from level to level to locate the trapped miners.

South African President Jacob Zuma told his fellow citizens to keep the trapped miners in their thoughts during the rescue operation.

"I urge all South Africans to keep the miners in their thoughts and prayers during this difficult period," Zuma said.

The fire which trapped the miners is believed to have started during maintenance operation on an air cooler 2,300 meters (more than 7,500 feet) underground, according to Harmony Gold.

The South African economy is heavily dependant on the mining of precious metals such as platinum and gold. Its gold mining industry is worth an estimated $4 billion (3.5 billion euros) and its mines account for nearly half the world's gold reserves, according to South Africa's Chamber of Mines.

In February 2014, nine miners died after an earthquake ignited an underground fire at another Harmony Gold Mine west of Johannesburg.

And in 2009, at least 82 people who were digging illegally in an abandoned gold mine shaft were killed in an underground fire. That same year, nine workers were killed during a rock fall in a platinum mine

Emergency workers are trying to save 18 miners trapped in a Turkish coal mine after their shaft was engulfed by water. Turkish officials say their chances of survival are slim. (29.10.2014)

Almost 30 miners rescued from a mine in central Bosnia

Five coal miners are feared dead after an earthquake sparked a gas explosion and a rock burst, causing two access tunnels to cave in at a mine in central Bosnia. Almost 30 others have been pulled out to safety. (05.09.2014)

Rescuers in Nicaragua have reportedly brought to safety several of the some two dozen freelance miners trapped in a gold and silver mine. The whereabouts of up to five miners remains unknown. (30.08.2014)