A ruling by a German appellate court has raised hopes that justice may come for survivors and victims' families for Nazi war crimes committed in the Italian village of Sant'Anna 70 years ago. 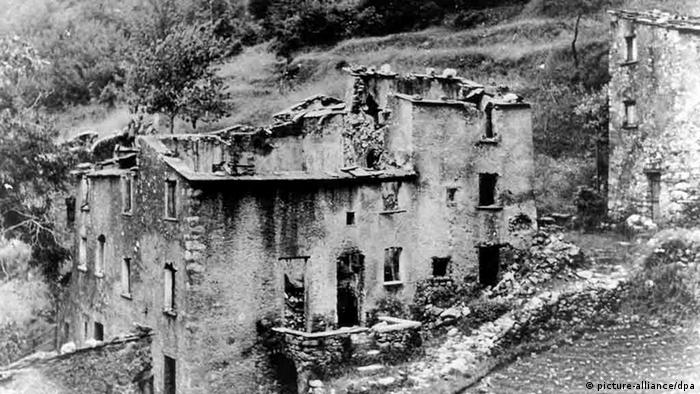 August 1944: Men of the Nazi Wehrmacht erased nearly an entire village. 560 inhabitants of the remote Tuscan mountain village Sant'Anna di Stazzema were shot or killed with hand grenades. Only a few survived.

One of them is Enrico Peiri. He lost his entire family in the massacre. Today, he's the head of the "Organization of the Relatives and Survivors of the Crime" and is fighting for justice, together with Gabriele Heinecke, a lawyer from the northern German city of Hamburg. Now, at least one of the perpetrators has to face justice, 70 years later: Gerhard Sommer.

Sommer was a young officer of the SS in 1944. The SS, or Schutzstaffel, was a major Nazi paramilitary defense corps under the command of Heinrich Himmler. "He can't talk his way out of the massacre, saying he wasn't directly involved," Gabriele Heinecke said of Sommer, "he was the one who autonomously gave the order, or passed it on down the chain of command."

For this atrocity, Sommer was sentenced to life in prison - in Italy. But until today, the man from Hamburg has not served his sentence.

In 2005, Gerhard Sommer was convicted in an Italian military court in La Spezia, together with nine other men. He was also ordered to pay damages to victims and surviving family members.

Germany began its own investigations in 2002. But these were halted by a federal prosecutor in Stuttgart in 2012 because there was not clear proof that the SS mechanized infantry division had gone to the village with the distinct purpose of exacting vengeance. In 2012, Gabriele Heinecken went to a higher regional court to force criminal prosecution - and she was successful. The court ruled that the former company commander could be sued in a court of law.

The verdict from the Italian military court in La Spezia was very detailed. "In it, you can find all the essential grounds to assume a suspicion against Mr. Sommer," Heinecken told DW, "but the state attorney in Stuttgart has fought this for more than ten years."

She accuses the state prosecutors of delaying the proceedings, which only benefits Sommer, who is 93 years old.

According to historians, the 16th SS mechanized infantry division "Reichsführer SS" left behind a long trail of blood in Italy. The Sant'Anna massacre "was an attack on the civilian population that had been planned for a long time and followed orders by Hitler to fight gangs," Heinecken said. "Troops marched on Sant'Anna from all four sides."

Sommer isn't a unique case. Ulrich Sander, spokesman for the Association of Victims of the Nazi Regime and Union of Antifascists (VVN), is all too familiar with the problem: "Those convicted weren't extradited to Italy back then and the trials weren't repeated in Germany either," Sander said to DW. "That made us very angry."

'A conviction in Italy is not enough'

The problem is that those convicted in Germany cannot be sent to Italy without the convicted person's consent, says Andreas Brendel, director of the Central Office for the Investigation of Nazi War Crimes. "According to German penal law, the evidence often isn't sufficient to charge the perpetrators, even when they've already been convicted in Italy."

In Italy, especially, the case's dismissal in 2012 provoked outrage. "It was scandalous that all these trials that were held in Italy and led to convictions were simply dismissed in Germany - for want of evidence," Sander said.

Only a few of the Nazi officers who had participated in the Sant'Anna massacre were ever forced to answer for their deeds after the war. SS-Stürmbannführer Walter Reder (the leader of an SS assault battalion, equivalent to the rank of major, ed.), who ordered the mass murders in Marzabotto and Sant'Anna di Stazzema, was the only person found guilty and sentenced to seveal decades in prison.

A trial competing with time

Time is the decisive factor in this trial. Those convicted are all of an advanced age, being born between 1916 and 1926. Gerhard Sommer is currently 93 years old. Of the original 10 to have been found guilty of the mass murders in Sant'Anna, only three are still alive. "This is about justice," says Ulrich Sander. Justice must also be spoken even at an advanced age."

Gabriele Heinecken also sees a need for action. "My client expects that when the documents arrive in Hamburg work will continue quickly and this trial will be seen through to the end."

Gerhard Sommer was examined by doctors in May and found to be capable of standing trial with only minor restrictions.

The survivors and relatives of victims of the Sant'Anna di Stazzema are satisfied at the prospect that those responsible for the massacre will be held accountable.

"The people of the village are relieved that they are at least being taken seriously, considering that their lives were so uprooted," says Gabriele Heinecken, an attorney for the victims. "They were disappointed of course that nothing happened in 2005 and that there were no consequences for those responsible. But now that a ruling has been handed down in the land of the Nazi perpetrators, my clients are glad and relieved. It means a great deal to them because they feel they are being taken seriously."

German Foreign Minister Frank-Walter Steinmeier has visited the site of one of the worst Second World War massacres conducted by Nazi troops in Italy; asking for forgiveness in the town of Civitella in Tuscany. (29.06.2014)

Sant'Anna di Stazzema was the site of a notorious Nazi atrocity during World War II. On Sunday, the German and Italian presidents visited the village to remember the victims of the 1944 massacre. (24.03.2013)

An Italian court condemned almost a dozen former Nazi soldiers to life in prison Wednesday for one of Italy's worst wartime massacres in a trial that has provoked strong emotions in Italy. (22.06.2005)