Nazi officer′s sons trace clues in wartime letter in search of his fate | Germany | News and in-depth reporting from Berlin and beyond | DW | 03.11.2019

German pensioners Ulrich and Immo Gleiss barely remember their father, a Wehrmacht officer who died in Ukraine in 1943. Nearly eight decades on, the brothers have traveled to the country find his final resting place. 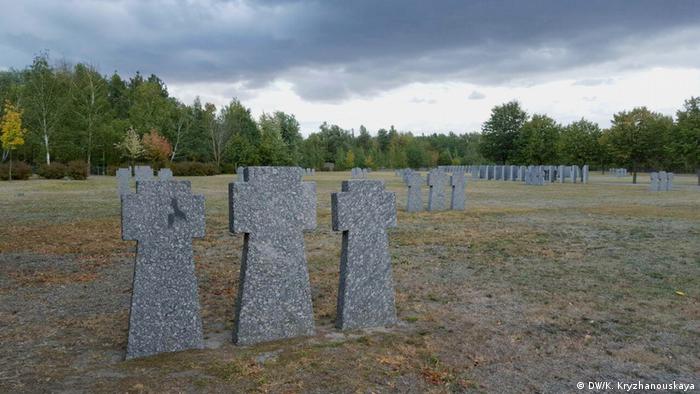 "I truly hope our father did not do anything bad," 77-year-old Ulrich Gleiss repeats over and over. Ulrich and his older brother Immo barely remember their father Georg Gleiss, who served as a Wehrmacht officer in Nazi Germany's armed forces. He died in Ukraine in September 1943. At the time, Ulrich and Immo were just 1 and 3 years old, respectively.

The brothers have come to the Ukrainian countryside, where somewhere their father lies buried. It is something they had been meaning to do for a long time. The fact that he served as an army officer in a war provoked by Nazi Germany is deeply unsettling for them. And they fear that once they arrive in Ukraine, none of the locals will want to speak to them because of this. 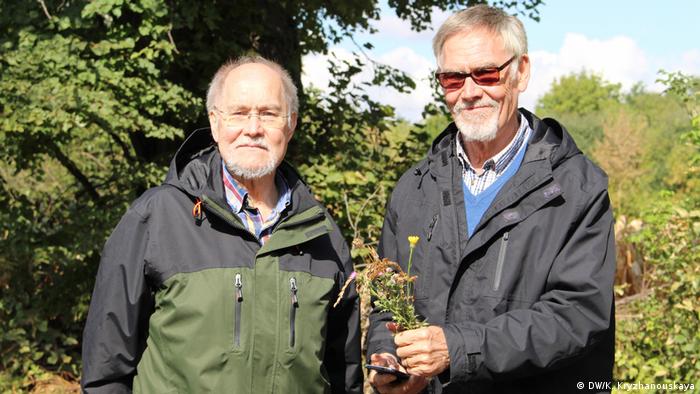 The diaries of a Wehrmacht officer

Their father Georg Gleiss was born in 1903. Before World War II, he taught French, English and sports. His sons still have old, yellowed letters and diaries of their father's dating back to the war. These documents indicate Georg served as a gas defense officer; none of them detail any combat missions. Yet he was forbidden from telling his family where he was based. So instead, he used a code system to discreetly divulge where he was located. By carefully piecing together the first letters of his sentences, his family learned the names of towns and villages where he was stationed in what is today Belarus, Russia and Ukraine.

In one of his letters, Georg describes how he, his driver and an orderly lived in the house of a Belarusian teacher and his Ukrainian wife. The man's 21-year-old son had been fighting against the Wehrmacht. So at first, the family was rather reserved towards the Nazi officer. But gradually, their relationship improved. 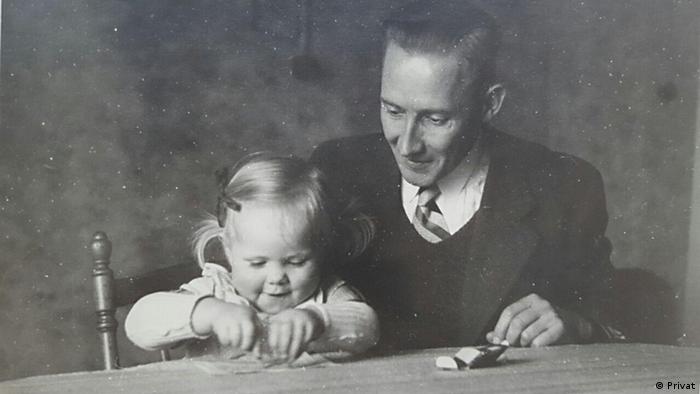 On the back of a different letter, Georg had written down an order in large lettering: "All residents of Shubnoye aged 16 and above must on Wednesday, November 7, gather at the church square at 6:15. Everyone must bring a passport. Anyone disobeying this order will be severely punished!" [Ed. note: location names have been changed for privacy reasons]

Reading this, Ulrich remarks somberly: "It is clear they ordered these people to gather for a specific reason." Though he does not know whether his father was the one who issued the order, and what eventually happened to these people.

Clues in a 75-year-old letter

Georg Gleiss' family learned of his death in September 1943. A letter penned by one of his comrades to them had included a map, indicating the location of Georg's grave near a Ukrainian village. It also contained pictures of the burial and of a wooden cross. A Nazi general even held a speech in Georg's honor. Today, however, this village is no longer marked on any map.

Aleksey Savtchenko of the German War Graves Commission in eastern Ukraine says these are useful hints as to where Georg Gleiss' grave might be located. While he says mass graves of German soldiers in Ukraine are well documented, finding this information in archives is hard — and that almost all witnesses from this period have passed away. 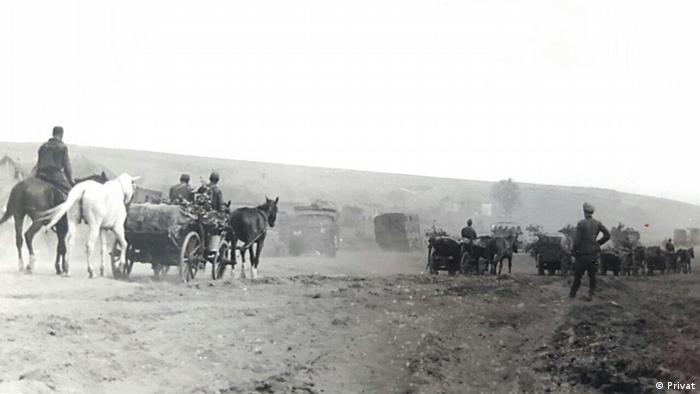 An image of German troops in the USSR during World War II, taken by Georg Gleiss

But with the help of the old German Wehrmacht map, the Gleiss brothers managed to identify the general area, thereby narrowing down the possible location of their father's final resting place. Now they have traveled to this empty, rural part of Ukraine to search for his grave in person.

Ulrich and Immo, impressed by the endless cornfields and big sky, climb out of their car. They snap pictures of a defunct well and geese in a pond. A middle-aged woman walks by, pushing a bike and leading a cow on a leash. The brothers ask her where they might find the village where their father is buried. She does not know, adding that there are no more elderly residents who might, either.

While the Gleiss brothers keep studying their map, an old motorcycle with a sidecar stops. But this local, who has only lived here for 20 years, can't help them either. Nevertheless, he gives the head of the local municipality a ring, hoping he might know something. 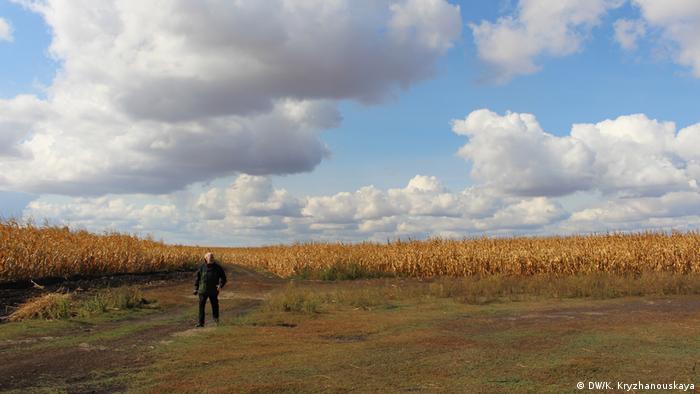 The head of the local municipality is called Anatoliy. He is a tall, roughly 50-year-old man, and takes the brothers for a ride in his cherry red Lada. He drives past a former clay pit belonging to a defunct brickworks, telling them that this was most likely the site of wartime executions. Then he takes them past a reservoir, where a German tank is said to have sunk. Anatoliy then continues onward to the train station and tells them: "If you father was based in this area then he was certainly here, too."

Afterwards, Anatoliy calls up friends, asking them whether they recall a German Wehrmacht officer having died in the area during the war. And slowly, bit by bit, details of Georg Gleiss' life and final moments in Ukraine begin to emerge.

Locals tell them that after German forces occupied the area, they executed two individuals who had boasted of being Soviet partisans. The Gleiss brothers decide to visit their grave, which lies near the road. A small grey obelisk marks the site.

Locals also recall that even though the Germans did not carry out large-scale punitive strikes against Ukrainians in this region, they did force them to load up highly fertile chernozem soil that was then brought to Germany.

A local history teacher says the Germans burned many people's homes while retreating from the Red Army. She says that her grandmother had stood outside her house together with her ill husband and their three children. When a German soldier came to them with a torch to burn it down, he spotted the children and changed his mind, giving them a bar of chocolate and telling them he would torch their neighbor's home instead.

She suspects that Georg Gleiss died on September 13, 1943, while German forces retreated from the Red Army. The teacher says there had been very little fighting during this time and only sporadic firefights. And speaking to a municipal representative from the neighboring village, Anatoliy learns that just two days after the Germans left, the Red Army moved in. 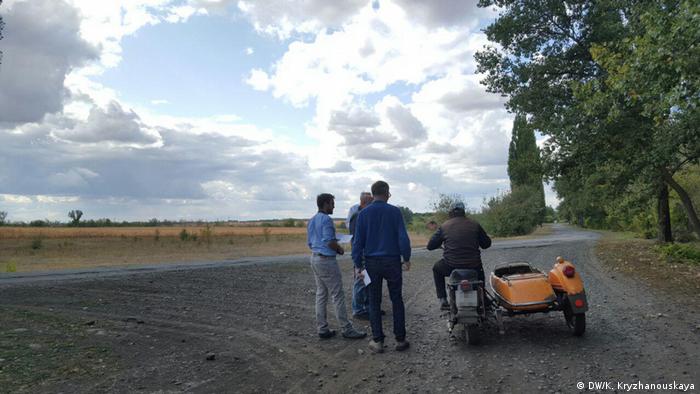 The Gleiss brothers during their search, speaking with Ukrainian locals

Word soon gets out that Anatoliy is helping the Gleiss brothers find the grave of their deceased father. His phone keeps ringing with locals passing on what they know. One caller even seems to know where the actual grave is located.

Anatoliy and the Gleiss brothers return to the village where the Germans began their search. There, they meet Ivan Ivanovitch, an elderly man clad in black sweat pants, a blue jacket and cap. He takes them to a 300-year-old lime tree on his property. According to Ivanovitch, when he began building his house, someone told him that there had been a German command center at this site and that a German had been buried beside this tree. 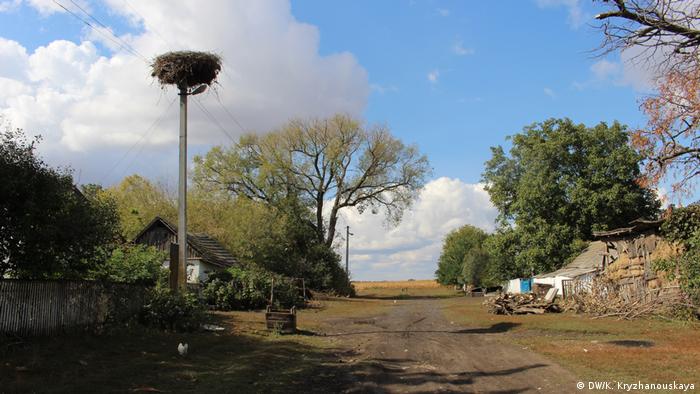 In the meantime, more and more locals have flocked to the search party, curious to see what is going on. Several of them confirm that they know where the German Wehrmacht officers lies buried. They report that the man had died ten kilometers from here and had then been returned to the command center to be buried here.

Ulrich and Immo Gleiss are deeply moved, sensing that they are about to finally lay eyes on their father's grave. Savtchenko, of the German War Graves Commission, believes the odds of this in fact being the final resting place of Georg Gleiss are very high. It has now been agreed with Ukrainian authorities that the grave will be located and possible human remains identified. Afterwards, they will be brought to the German war cemetery in Kharkiv at Germany's expense. There are four such large cemeteries across the country, all of which are financed by Germany.

Read more: The Nazi archives — Where Germany's dark past is stored 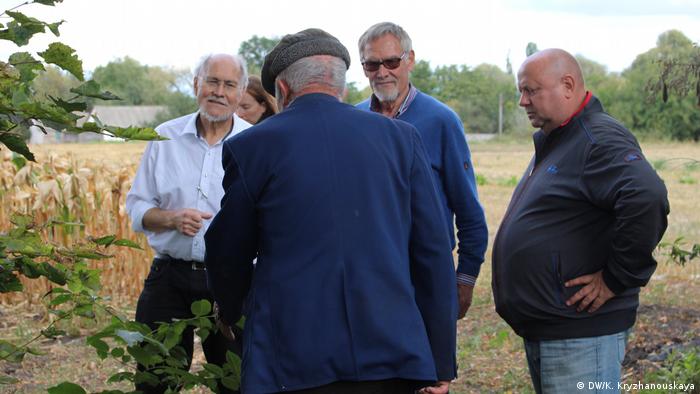 The Gleiss brothers with Ukrainian locals and Alexey Savtchenko (r.) of the German War Graves Association in Ukraine

The following day, the Gleiss brothers return to the lime tree by themselves. When nearby dogs start barking, Ivan Ivanovitch heads out to meet them. They get chatting and realize they are roughly the same age. Then Ivanovitch tells them: "My father also died in the war but nobody knows where he is buried." He assures the brothers they may come here when ever they want to, even once he is dead. And that his children and grandchildren will be more than happy to welcome them.

Ivanovitch, who can barely make ends meet with his meager pension, shows the Germans his farm house. There are geese splashing about in a puddle. A pile of firewood is stacked by the fence, ready for the winter. Ivanovitch wants to know if German villages look similar to Ukrainian ones like this. Which gets all three of them thinking. Until, eventually, Ivanovitch says: "Hitler and Stalin unleashed this war, and ordinary people had nothing to do with it!" He wanders off, leaving the brothers behind. Ulrich and Immo then gather some wild flowers as a memento before heading off.

Before their return to Germany, Anatoliy calls them, saying he has heard that tomb raiders had several times gone after their father's grave in the past. And that one individual had even been punished for doing so. He apologizes to them on behalf of the villagers, explaining that this happened during "a time of extreme poverty."

But there is nothing to be sorry for. After all, Ulrich and Immo still cannot believe how warm and helpful these Ukrainians were – despite the fact that their very own father served a German Wehrmacht officer in their country. And so, they vow to soon return.

Mihail Zaslavsky is the only known survivor among tens of thousands of Ukrainian Jews who were executed or burned alive following a bomb attack on October 22, 1941. The 93-year-old told DW how he escaped the Nazis. (22.10.2018)

Ukraine: massacres of the Jews