Richard Ratcliffe said British PM Boris Johnson has not done enough to secure his wife's release from an Iranian prison. Nazanin Zaghari-Ratcliffe has been detained for more than five years. 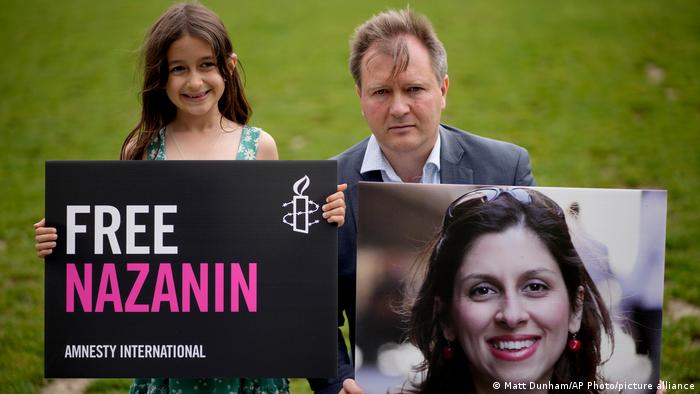 The husband of charity worker Nazanin Zaghari-Ratcliffe, who has been detained for more than five years in Iran, has gone on hunger strike again, British media reported on Sunday.

Richard Ratcliffe got his hunger strike underway on Sunday outside the Foreign Office in central London.

"We are now giving the UK government the same treatment. In truth, I never expected to have to do a hunger strike twice. It is not a normal act," Ratcliffe said on his change.org petition website.

He said Iran remains the "primary abuser" in Nazanin's case, then went on to add that the "UK is also letting us down."

"It is increasingly clear that Nazanin's case could have been solved many months ago — but for other diplomatic agendas," he said. "The PM needs to take responsibility for that."

Amnesty International said Ratcliffe wants to maintain a "constant vigil" by sleeping in a tent outside the Foreign Office.

He is hoping his stance will place enough pressure on Prime Minister Boris Johnson to secure the release of his wife and other detained dual British-Iranian nationals, Amnesty added.

Earlier this year, she was sentenced to an extra 12 months in prison on charges of spreading "propaganda against the system" after she participated in a protest outside the Iranian Embassy in London in 2009. The decision was upheld this month by an appeals court. The verdict includes a one-year travel ban, meaning she wouldn't be able to leave Iran until 2023.

Ratcliffe's 7-year-old daughter, Gabriella, lives with him in London, having returned from Tehran two years ago, where she had stayed with her grandmother while Nazanin was serving her jail sentence.

The British foreign secretary, Liz Truss, has spoken to both Nazanin and Richard since her appointment.

One of the key issues surrounding her potential release is the UK's refusal to pay a £400 million (€473 million) historical debt to Iran that the British government acknowledges it owes.

The Foreign Office says sanctions prevent the payment from being made.

Ratcliffe went on a 15-day hunger strike in 2019 outside the Iranian Embassy, a move he says was crucial in securing the release of his daughter Gabriella.

The Associated Press contributed to this article.