NATO's biggest exercise in 13 years ends on November 6. "Trident Juncture" shows an alliance in the process of changing and responding to Russia's military ambitions. DW's Max Hofmann reports from Sardinia. 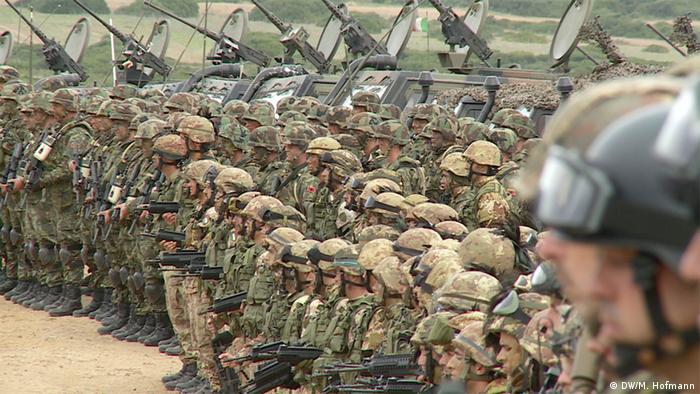 A few American soldiers stand at attention during roll call at the end of the exercise, along with the German and Albanian soldiers who have also officially taken part.

But the Italians are actually running the show on their own grounds in Sardinia. The envisaged "multinationality", a word often heard today, is still not particularly strong in this part of the great "Trident Juncture" exercise.

A senior NATO official - who would like to maintain anonymity - formulates the problem clearly: The fact that 28 members with different priorities and skills have to be coordinated is a "huge military disadvantage" especially with regard to Russia.

It may sound like a great feat, as 36,000 soldiers are taking part in the exercise in the western Mediterranean, but it actually pales next to Russia's display of military muscle. In just the past two years, Russia has held more than a dozen training events with up to 80,000 soldiers. Apparently most of them were surprise exercises and were not planned two years in advance, like NATO's "Trident Juncture." That is why Paul Ivan from the European Policy Center says, "If you look at the size of the exercises compared to Russia it's not extremely impressive." Yet at the same time, caution must be heeded to avoid boosting a spiral of military rearmament. 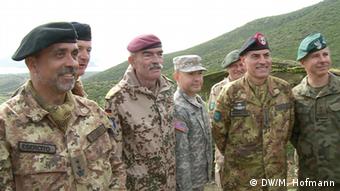 General Domröse (middle) with Italian and American officers on Sardinia

However, the current situation cannot be compared to the arms race during the Cold War, in which two equal powers constantly tried to outdo each other.

At the moment, Russia advances and NATO tries to respond. "Russia is more determined at the moment and more flexible and cohesive. That's something we certainly have to address," says the NATO official.

The cohesiveness does not surprise anyone, as Putin's military does not require complicated agreement or legitimization procedures.

General Hans-Lothar Domröse, who currently serves as Commander, Allied Joint Force Command Brunssum, tries to conduct the exercises in a manner that allows the different NATO members to work together as a strong unified force. "It is not like we are completely paralyzed," he says. But he also admits that NATO is alarmed about Russia's recent demonstration of its military skills – like firing missiles from the Caspian Sea to hit targets in Syria, which is 1,000 kilometers away. At least he is candid about NATO with regard to Russia. "The Russians have upgraded their forces considerably in the last ten years […] and we have come out of the Afghanistan and Kosovo missions with a 'meet and greet the people' mindset."

Strategy of deterrence and modern warfare 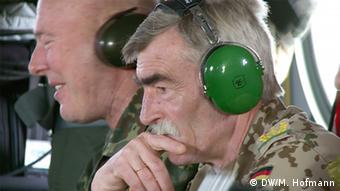 The Trident Juncture exercise is NATO's largest in 13 years

NATO is planning a long-term strategy. One example is the establishment of the Very High Readiness Joint Task Force, which will be in the position to attack anywhere on NATO territory within a few weeks. But no one is certain how things will develop. "We still have quite a distance to travel, to think through future strategies and exercises," says the NATO official. One word that often comes up in policy talks is "deterrence." He adds, "We will have to think hard about how to deter in modern times."

By "modern times" he means hybrid warfare and cyber warfare, like paralyzing the Internet, letting conflicts simmer without admitting to involvement, influencing public opinion by using Internet trolls, and being swift and flexible. That is what Russia does and more. Yet not everything about "Trident Juncture" is bad, claims Paul Ivan. Even though the exercise was designed and decided on before the events in eastern Ukraine unfolded, NATO was still able to integrate elements of modern warfare into the training. "In order to make clear what the limits are, you need NATO to make a stand. Including exercises like Trident Juncture," explains Ivan.

The USA will not go it alone

The NATO official shares this view. He says "timing is quite good" and "some elements of Trident Juncture are quite relevant, such as exercising complexity and demonstrating multinationalism." The latter is particularly important, especially to the USA. Russia may still not be a match for NATO member USA, but if necessary, the US can always rely on the cooperation with NATO and then deal with the situation on its own later. But that is not in the interest of the US, for multinationalism is a "huge political advantage," as the NATO official puts it. He also says, "NATO will always be made up of democracies but that gives us legitimacy." At least that is one advantage over Russia. And NATO is working to improve the other aspects.

NATO shows off military might with largest operation in years

NATO has opened a major land, sea and air exercise in the Mediterranean as part of its modernization campaign. The operation comes amid growing concern over Russian military aggression. (19.10.2015)

NATO will boost its rapid response troop numbers to support member states and allies on its eastern and southern borders, the alliance's secretary general has said. The move follows Russia's latest operations in Syria. (08.10.2015)

The year's biggest army drill is taking place in the center of Russia's vast territory, between the Urals and Siberia. The war games also involve naval ships and military jets, plus troops from other ex-Soviet states. (14.09.2015)