NATO said there would be "consequences" for Russia if it launches an invasion of Ukraine. Russia, meanwhile, warned the West to stear clear of Moscow's "red lines." 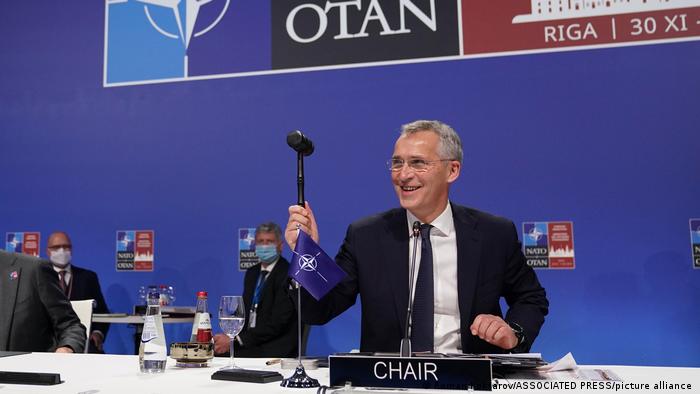 NATO foreign ministers gathered in the Latvian capital, Riga, on Tuesday at the start of a two-day meeting, with troubles to the alliance's east on Russia's border with Ukraine and in Belarus topping the agenda.

The 30-nation alliance remains uncertain of Moscow's aims on Ukraine's borders. Fears of a Russian incursion have grown amid accusations Moscow has deployed tens of thousands of troops and heavy weapons to its neighbor's borders.

"Any future Russian aggression against Ukraine would come at a high price and have serious political and economic consequences for Russia," said NATO Secretary General Jens Stoltenberg. He also stressed that Ukraine is not a NATO member and not covered by the alliance's mutual defense pact.

"We need to be prepared for the worst and we need to convey a message to Russia that they should not conduct a military incursion into Ukraine," he said, adding that alliance members could impose sanctions.

Earlier, US Secretary of State Antony Blinken said that the US commitment to Baltic security and article five, the mutual defense pact in the NATO treaty, remains "ironclad." 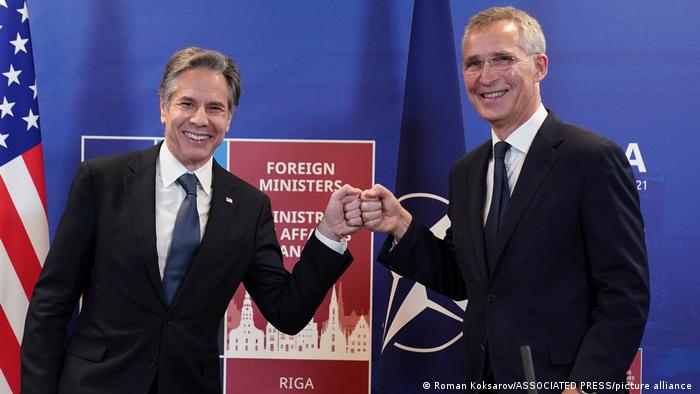 Blinken warned Russia of "serious consequences" if Moscow were to launch an incursion into Ukrainian territory as he headed into Tuesday's meeting.

"Any escalatory actions by Russia would be of great concern to the United States," he said.

Meanwhile, acting German Foreign Minister Heiko Maas said that Moscow would have to "pay a high price for any form of aggression."

Latvia's defense minister, Artis Pabriks, told DW he "shares the concerns" of the US and other NATO allies over a possible Russian invasion of Ukraine.

Pabriks also expressed fears about other countries in the region as Russia continues to exert its authority over its neighbors. He said that Moscow "basically controls almost all activities within Belarus" as it seeks to strengthen its influence in the region.

Ukraine's foreign minister, Dmytro Kuleba, is expected for the second day of talks as the alliance works to reassure its eastern most members. NATO officials are considering whether to provide additional support to Ukraine's military and boost its presence on the eastern flank.

Like Ukraine, NATO summit host Latvia and the other Baltic states of Lithuania and Estonia spent decades under Soviet occupation and are wary of Russian activities in the region.

Speaking at an online investment forum, Russian President Vladimir Putin reiterated that NATO involvement in Ukraine was considered a "red line" for him.

Russia denies it supports the separatist fighters it backs in Ukraine's eastern industrial heartland known as the Donbass. Instead, Moscow prefers to call them volunteers, whereas it openly annexed Crimea in 2014.

Crisis on the Belarus border

Also on the agenda at the NATO meeting is the migrant crisis at Belarus' borders with Poland, Lithuania and Latvia.

Thousands of migrants, allegedly funnelled to the border by Minsk as payback for EU sanctions, have been stranded in the region for weeks.

"[Belarusian leader Alexander] Lukashenko should stop using vulnerable people as pawns in a political game against other countries," Stoltenberg said.

The EU accuses Russian ally Belarus of deliberately facilitating human trafficking for migrants from Iraq and elsewhere who seek a brighter future in the bloc. Lukashenko denies this.

Last week, Polish President Andrzej Duda met with Stoltenberg but held back on invoking article four or consultations among allies. For now, the danger posed by the border skirmishes involving migrants and border guards has remained below the threshold of armed conflict.

"We are ready for this on the territory of Belarus," he said.