NATO voices skepticism over size of Russia′s Zapad military exercise | Europe| News and current affairs from around the continent | DW | 14.09.2017

NATO has welcomed recent dialogue with Russia, but the alliance has serious doubts Moscow is revealing the true extent of its military exercises. Last time this training took place was just before the invasion of Crimea. 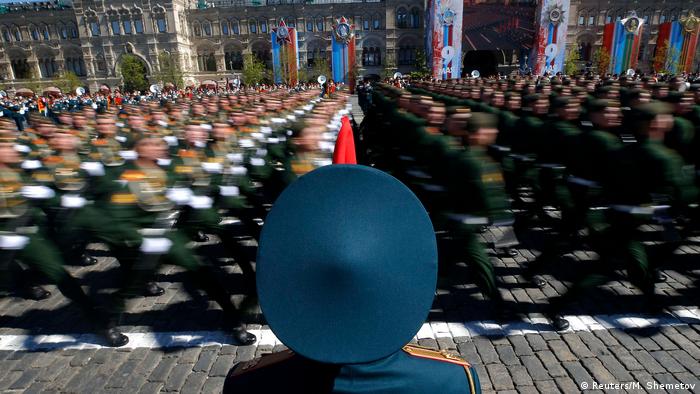 Russia's NATO ambassador told reporters last week his government would be completely transparent about the Zapad military exercises that have begun in western Russia and Belarus, near the alliance's border. At this point, Aleksander Grushko said, it's not envisioned that any of the planned Zapad (West) drills will utilize more than 13,000 troops, the number at which Russia would be obliged under an OSCE agreement to allow other governments to formally view the exercises. "If [the exercises] meet the threshold established by the Vienna Document, observation will be provided," Grushko said. "If not, not."

The ambassador said his report to the NATO-Russia Council (NRC) should put to rest all the rumors that the Kremlin could be planning to amass as many as 100,000 military personnel in total in the joint Russian-Belarusian training mission, simply carved up into groups below the reporting requirement. "If such speculations continue ... about the intentions of Russia and Belarus," he said, "this would mean that this practice of briefings doesn't give results on the political front. We believe that everything we do in this platform within the NRC and OSCE should really contribute to mutual trust."

NATO Secretary General Jens Stoltenberg welcomed Russia's voluntary disclosure of numbers of participating troops, planes and ships, allowing that it's "too early to say" whether they're accurate since Zapad hasn't taken place. But, he noted, "from previous experiences related to previous exercises, we have every reason to believe it may be substantially more troops participating than the official reported numbers."

NATO officials point out Russia has officially declared every military exercise since 1991 to be below the threshold of 13,000 so that it doesn't have to allow inspections nor observers. Zapad 2013 followed that model, with official Russian announcements declaring the troop presence to be "12,000" or perhaps "12,500." Various reports after the exercises estimate there were at least 75,000 boots on the ground, training in operations that were quite useful a few months later when Russia invaded Ukraine's Crimea peninsula. 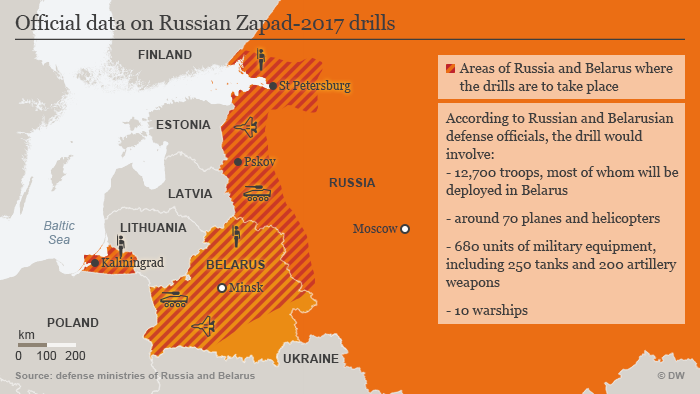 The US Army's top commander in Europe, Lt. Gen. Ben Hodges, is taking things coolly. "There's nothing evil about Zapad," Hodges told DW. "It's an exercise scheduled every four years and it's certainly Russia's right to exercise." The problem, he emphasizes, is the lack of transparency. "I've never met in three years a single journalist who's covered a Russian exercise," he said.

"So if Russia were serious about wanting stability and security along their western border, they would invite journalists out there to demonstrate, 'hey, we're just defensive.'" Hodges notes that instead, Russia has moved in 800 tanks "which exist only to attack."

Still, Hodges says, during Zapad, NATO's only change to its current beefed-up deterrence will be to move one airborne battalion - about 650 soldiers - up to the Baltics. 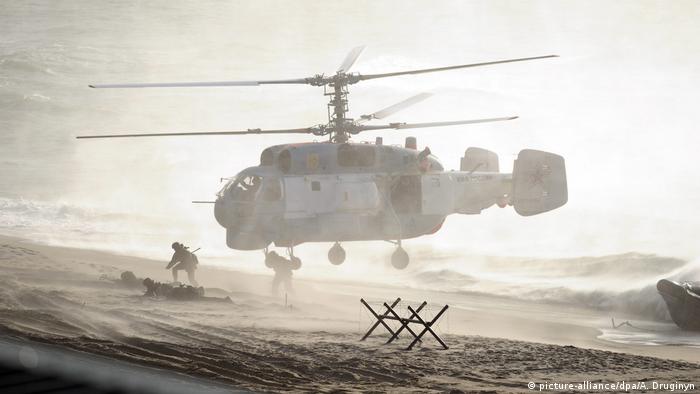 With no visibility coming from Moscow, NATO and other observers are relying on their own methods to keep track of the Kremlin's maneuvers. Magnus Nordenman is the director of the Transatlantic Security Initiative at the Atlantic Council, which has launched a "ZapadWatch" program to analyze what's happening on the ground and what that will mean for Europe and NATO.

"With this initiative we are bringing together the Atlantic Council's European security experts with our capabilities to do digital forensics in order to shine a light on Zapad," Nordenman told DW. "Previous iterations of Zapad have given us important clues about Russia's growing military capabilities, Moscow's intents, and political signaling to Europe, the United States, and NATO. It's important that American and European policy makers and the broader public pay attention to this."

Even as NATO continues calling on Moscow to be honest about its military activity, the alliance has been engaged in a long-term effort to strengthen the notification process. Dominik Jankowski, the head of the OSCE unit in the Polish foreign ministry, says the Vienna Document is still a "crucial element of transparency and risk reduction in Europe" even with Russia's "selective implementation" of it.

"We need to continue efforts to modernize the Vienna Document, even if we are still waiting for a Russia willing to engage in that issue," Jankowski told DW. "There are numerous vital proposals on the table: ranging from greater transparency regarding snap exercises to risk reduction mechanisms and incident prevention efforts." He says the OSCE is the best forum to work on reforming multilateral security policy as all allies and Russia are members.

Estonia's outgoing NATO ambassador Lauri Lepik even suggests the alliance could look at the Russian activity as an opportunity, after all the upgrades and reconfiguration of allied defense and deterrence.  "Zapad is a perfect stress test," Lepik said "for the whole NATO machinery on situational awareness and intelligence gathering."