NATO to halve troop strength in Kosovo to 5,000

The NATO secretary general has announced plans for the alliance to reduce the number of troops it has in Kosovo from nearly 10,000 to 5,000 within months. KFOR has been in the territory for more than a decade. 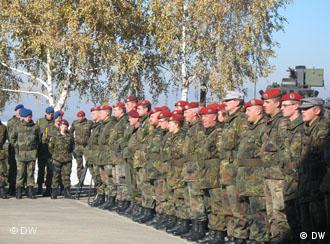 Around 1,500 German troops are currently based in Kosovo

Citing progress in the breakaway former Serbian province, NATO Secretary General Anders Fogh Rasmussen made the announcement in a statement released to the media on Friday.

"The security conditions in Kosovo continue to improve, which is a positive sign, not only for Kosovo, but for the whole region," the statement said.

Rasmussen added that local institutions were increasingly capable of assuming responsibility for security tasks, and that the Kosovo Force (KFOR), which had already been reduced from 15,000 to 10,000 soldiers earlier this year, would continue to be a deterrent to violence. 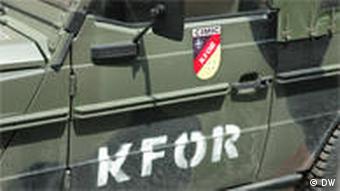 "KFOR will remain able to deploy forces quickly and effectively whenever and wherever necessary, including with robust reserves. KFOR's mission to guarantee a safe and secure environment in Kosovo remains unchanged."

The German commander of the NATO forces in Kosovo, Major General Erhard Buehler, said the decision was taken "because the security situation is calm," but he said Kosovo's Serb-inhabited North remained an area of concern.

International peacekeeping forces arrived in Kosovo in 1999, following a 78-day NATO bombing campaign to end a conflict between Serbian forces and fighters from the ethnic Albanian majority in what was then a province of Serbia.

Kosovo unilaterally declared independence from Serbia in Feb. 2008, paving the way for a reduction in the number of peacekeepers, although ethnic tensions have persisted. In recent weeks, Belgrade, which refuses to recognize Kosovo as an independent state, has also signaled a softening of its approach to Kosovo, a move which was welcomed by NATO.

Foreign Minister Guido Westerwelle has called on all EU states to accept Kosovo's independence on the last day of his tour of the Balkans. He also urged Bosnians to stand united to boost their chances of EU membership. (27.08.2010)

German Defense Minister Karl-Theodor zu Guttenberg has announced that Germany will not unilaterally withdraw from NATO's peacekeeping mission in Kosovo. (30.03.2010)