European officials have visited Turkey for the first time since the attempted coup. They sought to reassure their ally that they would continue their partnership, even amid growing concerns over Ankara's actions. 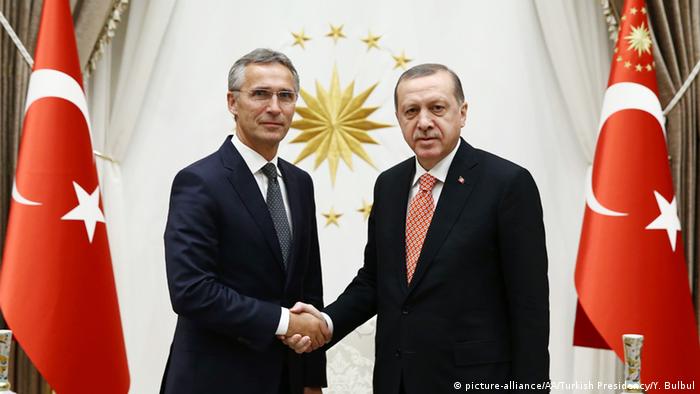 NATO Secretary General Jens Stoltenberg visited Turkey this week amid ongoing controversies over the country's post-coup crackdown and its increased involvement in the war in Syria.

Stoltenberg, speaking on Turkish news channel NTV, said the military alliance supports Ankara in its campaign to protect its borders. "We welcome Turkey's increasing efforts to fight against [IS]," Stoltenberg said, according to Reuters. "Turkey has a right to defend itself. There have been many terrorist attacks coming from the Syrian side."

In August, Ankara launched "Euphrates Shield," its first cross-border operation in the country since the civil war began in 2011. The operation is designed to drive away so-called "Islamic State" (IS) militants and rival Kurdish forces away from Turkey's border with Syria.

Turkey has been the target of intense rocket fire from IS-held territory for some time, with the border towns like Kilis bearing much of the damage. Shortly before the start of "Euphrates Shield," Turkish forces stationed along the border also traded fire with militants in Syria. 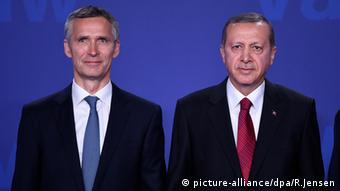 Stoltenberg did however appear to acknowledge international concerns over Ankara's ongoing purge in the wake of the failed coup, which has seen some 40,000 academics, businessmen, journalists and teachers arrested, in addition to hundreds of thousands of others who have lost their jobs.

"Any attack on democracy, in any of our countries, is an attack on the very foundation of our alliance," Stoltenberg said on Thursday following a meeting with President Recep Tayyip Erdogan, before adding: "A strong and democratic Turkey is essential for the stability and security of Europe and the region."

On Wednesday, Turkey arrested more than 100 suspects in connection with the coup attempt, insisting it was working with the Council of Europe to ensure that they received a fair trial.

Stoltenberg's talk with Erdogan also came the same day Ankara lifted a ban on German MPs visiting the NATO air base in Incirlik, in southern Turkey, following a resolution passed by Berlin deeming the massacre of Armenians by Ottoman Turks in 1915 a "genocide. 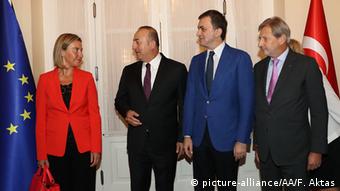 Mogherini and Hahn meet in Turkey

Also on Friday, EU foreign policy chief Federica Mogherini and EU Enlargement Commissioner Johannes Hahn met with Turkish Foreign Minister Mevlut Cavusoglu during a press conference. Mogherini said Brussels would continue moving ahead with Ankara on visa-free travel and an upgraded customs union, which has become a major bargaining chip in the EU and Turkey's negotiations for a refugee deal.

Hahn also said he believed a solution to the issue of visa-free travel was possible. The EU has held out on liberalizing visa restrictions, citing the ongoing crackdown.

Earlier in September, as EU leaders planned to meet in Slovakia, German Foreign Minister Frank-Walter Steinmeier called on Turkey to respect human rights. "I am certain that we will demand that Turkey respect the principles of the rule of law in coming to terms with the aftermath of the coup," he said in Berlin.

Germans petition government to pressure Turkey on freedom of expression

More than 100 journalists have been detained in Turkey since a failed coup attempt. Germany's press freedom organizations have called on Berlin to take a clear stance against the crackdown. (06.09.2016)