Italian President Giorgio Napolitano has been sworn in for a second term. He faces the daunting task of breaking a two-month deadlock on forming a new government in the recession-mired country. 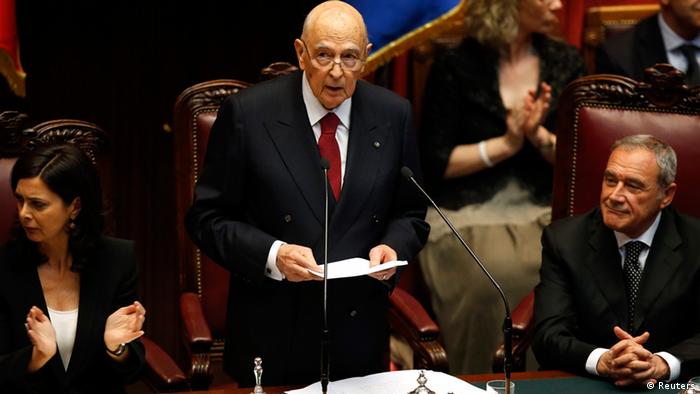 Napolitano, 87, was sworn in on Monday following his re-election on Saturday, becoming the first Italian president to serve a second term. At the ceremony, Napolitano reportedly urged leading politicians to form a new government "without delay."

He scolded fellow politicians for failing to break a post-election deadlock.

"You cannot avoid facing up to the electoral results, like them or not," Napolitano said on Monday after taking his oath, according to the dpa news agency.

"I have a duty to be frank. If I find myself once again facing the kind of deafness I ran into in the past, I will not hesitate to draw the consequences," Napolitano said.

In the two months since Italy's election, politicians had failed to find a new presidential candidate who could win a majority and form a new government. Despite hoping to retire, Napolitano agreed to stay on for a second term in an effort to help broker a coalition government after being urged to do so by Italy's two main parties. He felt bound by duty to stay on and help Italy out of its political quagmire.

Italy has been awaiting a new government since the February elections in which the center-left Democratic Party (PD) won the most votes. The PD not did win enough votes, however, to form a government on their own.

Time for an Italian grand coalition?

After an electoral drama in which the Democratic Party came close to self-destruction, a broad-based coalition is looking likely. In Rome, it's not just supporters of the Five Star Movement who are taking to the streets. (21.04.2013)

The PD had been unable to put forth a viable presidential candidate, and party leader Pier Luigi Bersani announced his resignation on Friday. The PD has refused to form a coalition with the second largest party, former prime minister Silvio Berlusconi's Party of Freedom conservatives. A new party, M5S, refuses to form a coalition with either of the two main parties.

With his mandate of seven years, Napolitano can call new elections, which he was unable to do in the final months of his first term. This power will enable him to pressure Italy's political parties into forming a viable coalition government.

Moreover, only the president can nominate a prime minister and approve his cabinet.

Investors were relieved by Napolitano's re-election, and the main stock index in Milan rose in kind, with a 1.8 percent increase, the strongest gain in Europe.

"We can now celebrate the unblocking of the situation," Edoardo Luini, a market analyst at Trading Room Roma told the Associated Press. "It is not the best solution, but it was the only possible one - or at least the most convenient."