In Denmark, a TV show in which women strip while men critique their naked bodies is described as the most sexist talk show in history. Maybe controversial, but definitely overrated, says Danish journalist Ellen Otzen. 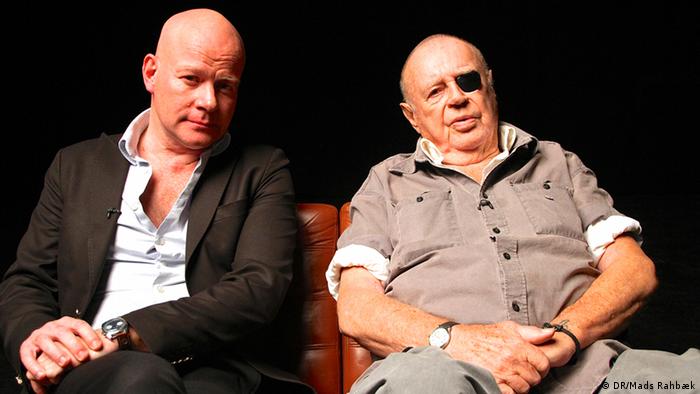 Thomas Blachman (left) in "Blachman" wants to "describe the female body with poertry."

If Denmark were a man, he wouldn't be getting laid - or at least that's what jazz musician, former X-factor judge and TV celebrity Thomas Blachman says.

Blachman is the presenter of a controversial new show in Denmark, one which is named, imaginatively, "Blachman." It features naked women, but the name gives you a clue as to what it's really about.

According to Blachman's vision of the kingdom of Denmark, the average Danish man has been "castrated" by high-powered Viking feminists smashing the glass ceiling, demanding equal pay and shared parental leave.

Thus does Blachman come forth with some daring hypotheses. First, that Denmark has become a "pik-less" society, as they say in Danish - a "penis-less society." Second, men have been reduced to wimps - or worse, he argues - to the status of women.

As a result, Blachman feels that men need to reclaim their status. And that, it seems, can only be done by objectifying women's bodies. 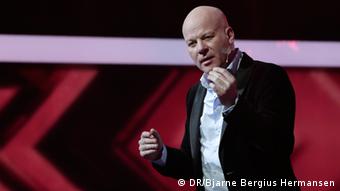 The female body, apparently, is thirsting for words - the words of a man. So he's decided to give us just that, together with the help of various Danish males. These specimens from his own ranks are mostly middle-aged and older. Among them are a writer, a fashion designer, a sex therapist and a stand-up comedian.

They walk in wearing bath robes, only to then undress in front of Blachman and his studio guest. The two men then give a running commentary on the women's physique as she strips - nameless, naked and silent.

I do wonder how Blachman knows what a woman's body yearns for. He certainly doesn't ask any of the women who parade naked in front of him.

But why did the women do it? Did they feel humiliated standing naked and silenced in front of two gawking men? Or was it actually a bit of a laugh?

Denmark's Radio - the country's national broadcaster and producer of the show - put me in touch with one of the silent, naked women who took part, 26-year old Mette Munkoe.

A professional art school model from the western provinces of Denmark, she strikes me as a feisty, down-to-earth person - not a subjugated woman.

She had a great time taking part in the show, she tells me. Blachman, in her eyes, is deep, clever and funny. And when she stood naked in front of him and his mate, he was reduced to a giggling school boy. She felt empowered, not in the least bit objectified, she tells me.

"It's art - it's not a cheap reality show," she told DW. "These men are not salivating over our bodies. They just admire women's bodies in all their shapes and forms."

But I'm not so convinced that the Blachman show is deeply innovative art.

He and his cohorts appear to use the situation with the naked women as a platform to talk in a quite banal way about themselves and their own relationships with women. We hear Blachman complaining that women are not as funny or as philosophical as men. So in fact, the much-trumpeted poetry he says he wanted to bring into this program is a bit thin on the ground.

On the other hand, as a woman, I'm not deeply insulted by the program. 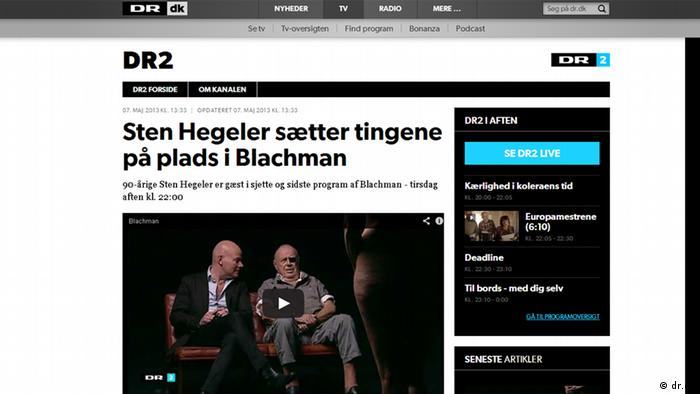 Screenshot from the Blachman website - clearly visible: two "poets" and their muse

'Middle-aged men in a strip joint'

Blachman himself is courteous enough about these naked bodies, babbling on about an elegant ankle or a well-shaped collar-bone.

At times, as one Danish woman blogger noted, "It's more like listening in on a conversation between a couple of middle-aged men in a strip joint."

What irritates me is that these men can only bare themselves when they are placed in a traditional, sexist, power position, sitting fully clothed and gazing at a naked woman - one that isn't allowed to speak, mind you.

It's not that he's after women with a perfect Barbie body. He praises the unenhanced breast. He wants tenderness - female tenderness towards men is missing these days, he claims.

More than anything, he strikes me as a man going through a midlife-crisis.

Blachman is also a man with a very clever female producer, Sofia Fromberg.

"We have a program that reveals what men think about the female body," she stated. "Quite honestly, what is wrong with that?"

In the wake of the media furor unleashed by the program, Blachman has now retreated to his New York home saying his country is "ungrateful" and will "wear down geniuses."

Ah yes, the prophet isn't recognised in his homeland - heard that one before. So what does the Blachman show tell us about Danish culture? Is it deeply sexist?

I don't think so - not any more than any other Western culture is these days. At the end of the day, Blachman can talk about how poetry is missing from sex these days till he's blue in the face.

But as both he and his producer know full well, at the end of the day - call it art, call it sleaze - bare breasts and bottoms attract viewers. Throw in a narcissistic celeb, and you've got the recipe for a successful program.

Naked penises are a bit too much for Vienna residents. Placards promoting a major exhibition on the male nude in art history caused such a stir in the Austrian capital that the critical parts have been covered up. (19.10.2012)

A debate about the status of women and media ethics in modern Indian society has been triggered by the molestation of a 17-year-old girl in Assam. The footage was filmed and broadcast by a local TV station. (20.07.2012)

Danish the “happiest people in the world”