A local politician appearing body-painted but half-naked as a unicorn proved a hit at a gardening exhibition in southwestern Germany. But not everyone was amused. 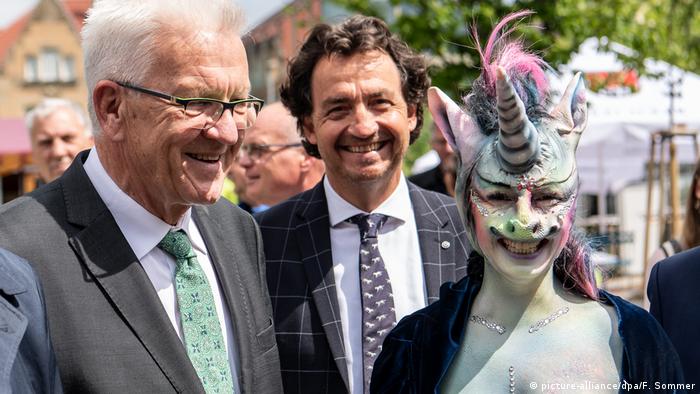 A local councilor sporting nothing but a unicorn headdress, underpants and a little body paint spruced up a regional flower show near the southwestern city of Schwäbisch Gmünd in the state of Baden-Württemberg.

The Left party politician Cynthia Schneider did not quite manage to stay anonymous in sleepy Remstal, despite the face mask, head gear and all-over body paint.

And she wasn't exactly everyone's idea of an ideal mascot for the opening of the flower show. The unicorn is part of the city's coat of arms, but some visitors and social media commentators balked at the nudity, calling her look "tasteless," "tacky" or "unnecessary." Some labeled it "sexist."

"I don't mind unicorns, but the way it was presented wasn't quite appropriate," said Thorsten Englert, the Remstal gardening show's director, stressing that he wasn't referring to the nudity, which he said "wasn't really that noticeable."

The kids liked it

Kids being partial to unicorns these days also caused young visitors to surround Schneider, although some — presumably adult — commentators on Facebook suggested she wasn't "fluffy" enough for a unicorn. A journalist on Twitter said, "That's one way of advertising your town," showing a picture of Schneider and the mayor of Schwäbisch Gmünd, Richard Arnold.

Baden-Württemberg State Premier Winfried Kretschmann (top picture, left) was unperturbed, posing for a picture with the unicorn, aka Ms Schneider. He refused to be drawn into the controversy, saying that an event like this should not provoke "fundamental discussions."

Children, he insisted, don't tend to be impressed by exposed breasts anyway; they just like unicorns.

Albrecht Dürer, Paul Cezanne and Paula Modersohn-Becker are just a few artists who drew male nudes. The Kunsthalle Bremen shows how representations of the naked body developed over six centuries.

As Germany reports another dismaying record in COVID statistics, its hardest-hit states are planning stricter curbs. Among other things, the country's beloved Christmas markets are being canceled one by one.