Nadiya Savchenko: The thorn in President Poroshenko′s side? | Europe | News and current affairs from around the continent | DW | 27.05.2016

Nadiya Savchenko: The thorn in President Poroshenko's side?

The Ukrainian pilot has returned to Kyiv after being released in a prisoner swap with Russia. President Poroshenko fought to bring her back but, as DW's Emma Burrows writes, her return could prove bittersweet for him. 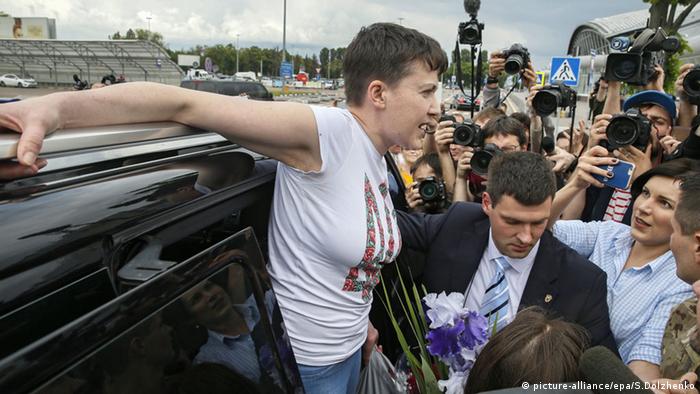 Nadiya Savchenko was met by crowds of people and the press upon her return to Kyiv after being released from prison. She had been sentenced to 22 years in Russia, accused of directing artillery fire to kill two journalists in eastern Ukraine - charges her lawyers - and the West - said were trumped up.

Her heroic return was in stark contrast to that of the two men she was swapped for. Ukraine says Alexander Alexandrov and Yevgeny Yerofeyev were Russian military intelligence officers, fighting in the war in the east of the country and sentenced them to 14 years in prison. The two admitted they were Russian officers shortly after they were detained but Russia has disowned them, saying they were not active servicemen when they were captured. 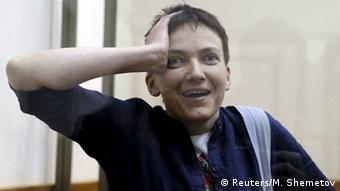 On the tarmac at a Moscow airport, they were only met by their wives and a handful of Russian media. There was no meeting scheduled with Russian President Vladimir Putin.

Savchenko, on the other hand, arrived at a Kyiv airport to defiantly declare that she was "ready to once again give my life," for Ukraine before being whisked away to meet President Petro Poroshenko and be honored with the title 'Hero of Ukraine.'

For President Poroshenko, securing the return of the fighter pilot who has become a symbol of resistance to Russia is a high-profile coup. But it could also prove to be a political ticking time-bomb.

During her time in detention, Savchenko spent many days on hunger strike, protesting her innocence. In court, she raised her middle finger to the judge and broke out into a traditional Ukrainian song as she was sentenced. According to her lawyers, she repeatedly refused to ask President Putin for a pardon: the Kremlin says she was released after the families of the two journalists killed in eastern Ukraine appealed to him to free her on humanitarian grounds. 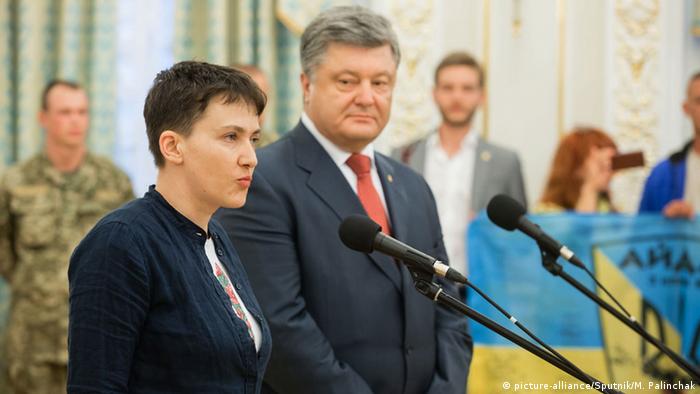 In Ukraine she has become a figure who has the moral high ground, a national icon and a symbol of courage.

President Petro Poroshenko, on the other hand, is seen by many Ukrainians as a man who does not keep to his word: failing to divest himself of his business interests as president despite promising to do so and as struggling to reform a country in economic and political meltdown.

In the last few months, political infighting has seen both the prime minister and finance minister leave the government. Shortly afterward talks resumed to bail out Ukraine and secure a third tranche of loans from the International Monetary Fund but they are partly contingent on the government doing more to root out rampant corruption.

Caught between two camps - those who oppose reform and those who think it is not going fast enough - President Poroshenko is also seen by hardline nationalists as someone who is too weak to defend the country's national interests. The nationalists oppose the implementation of the Minsk peace agreements which give greater autonomy to war-torn eastern Ukraine.

Savchenko, a nationalist and returning hero, unencumbered by corruption scandals and old political ties could become the person Ukrainians unite behind. She already has some political capital: during her time in prison she was elected to the Ukrainian parliament.

Nadiya Savchenko herself has said that she would like to return to her job as a military pilot but that she is willing "to become president" and launch a political career should Ukrainians back her.

Whether or not she succeeds is one thing, but, along the way, she could prove to be a destabilizing thorn in President Poroshenko's side.

Rather than letting her rot for 22 years in a Russian prison, perhaps that is part of the reason why the Kremlin decided to send her back.

The exchange of Ukrainian fighter pilot Nadiya Savchenko for two Russian soldiers is good news. However, it does not signal a turning point in the war in Donbass, writes DW's Bernd Johann. (25.05.2016)