Myanmar′s Suu Kyi seeks ′reconciliation′ amid growing Rohingya violence | Asia | An in-depth look at news from across the continent | DW | 30.11.2016

After conspicuous silence, Aung San Suu Kyi has called for "achieving stability and rule of law" in Myanmar. The UN has warned that a crackdown on the Muslim Rohingya minority may constitute crimes against humanity. 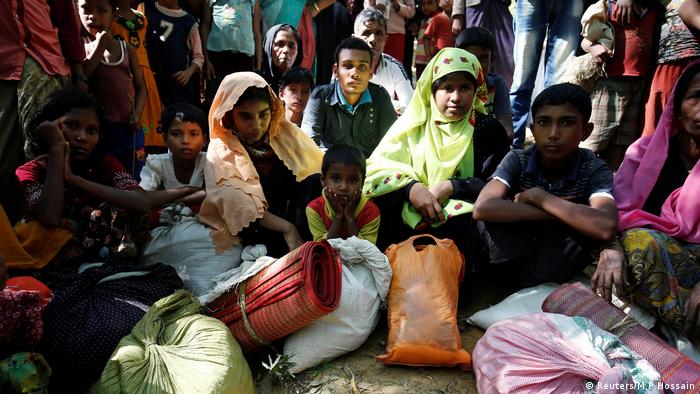 The head of the UNHCR on the Bangladesh border with Myanmar has accused the army of crimes against Rohingya Muslim communities. Thousands have fled to Bangladesh in a growing crisis.

Myanmar's de facto leader Aung San Suu Kyi on Wednesday vowed to work for "peace and national reconciliation" at a business forum in Singapore amid growing international criticism of a brutal crackdown on the country's Muslim Rohingya minority.

The country is also grappling with a decades-old insurgency in northern Shan state, with thousands fleeing that region for China this month.

"As you know, we have many challenges. We're a country made of many ethnic communities, and we have to work at achieving stability and rule of law," Suu Kyi said. "Businesses do not wish to invest in countries which are not stable. We do not wish to be unstable, but we've had a long history of disunity in our nation. So national reconciliation and peace is unavoidably important for us."

Suu Kyi's remarks come a day after the UN Office of the High Commissioner for Human Rights (OHCHR) condemned the "use of violence by armed individuals in northern Rahkhine State," prompting thousands of Rohingya to flee to Bangladesh.

The statement warned that reported attacks on the Rohingya community by security forces may amount to crimes against humanity.

"It is essential that the government ensures its attempts to restore security are firmly grounded in international human rights laws and standards, and that this is recognized by the affected population," OHCHR said.

On Tuesday, former UN chief Kofi Annan began a weeklong visit to the predominantly Buddhist nation in his position as the head of the Rakhine Commission, which aims to mend ethnic and religious divides in the Burmese state.

Annan has expressed "deep concern" over the violence in the Rakhine State, which has displaced an estimated 30,000 people in the latest series of attacks.

Human Rights Watch found that hundreds of buildings in Rohingya villages had been razed after analyzing satellite imagery.

Many of those fleeing for Bangladesh have reported instances of gang rape, torture and murder by security forces. However, the military has denied any involvement in the systematic persecution of the Muslim Rohingya minority, claiming it is chasing down militants.