The villagers reportedly defended themselves with swords and home-made rifles against members of the ruling military junta. The soldiers "shot everything that moved," according to one resident. 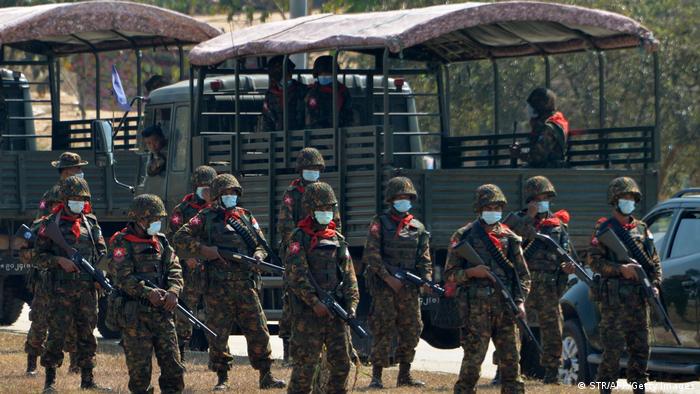 Myanmar security forces opened fire on villagers earlier this week, killing at least 25 people, according to local media and witness reports on Sunday.

The violence on Friday occurred in the central town of Depayin in the Sagaing region.

Around 150 soldiers went to six villages near Depayin on Friday, according to media outlet Than Lwin Khet News. The security forces then reportedly opened fire on the villagers.

"There were people dying at farms and by the railroad. They (soldiers) shot everything that moved," an anonymous Depayin resident told Reuters news agency.

The soldiers reportedly targeted the area due to the presence of the People's Defense Force (PDF), an armed opposition group against the military.

Young local members of the PDF used makeshift weapons to fight back against the military's incursion into the area. Villagers used swords and home-made rifles, but were overwhelmed by the military's firepower.

Local residents said at least 25 bodies were found after the fighting.

Myanmar's military has not yet commented on the clashes. A state-run newspaper claimed "armed terrorists" ambushed soldiers who were on patrol in the region.

What is the political situation in Myanmar?

Myanmar has been ruled by a military junta since February. The military seized power after having arrested State Counsellor Aung San Suu Kyi and other members of the ruling National League for Democracy (NLD) party.

Citizens have taken to the streets to protest the junta. In response, the military has cracked down on the demonstrators, sparking international condemnation.

The coup has forced more than 230,000 people out of their homes due to fighting, according to the UN.

Prisoners' aid group AAPP claims more than 890 people have been killed in the months since the coup, with thousands having been arrested by the junta.