Japan says it is asking Myanmar to free a Japanese journalist who has been taken into custody amid a crackdown on the opposition. 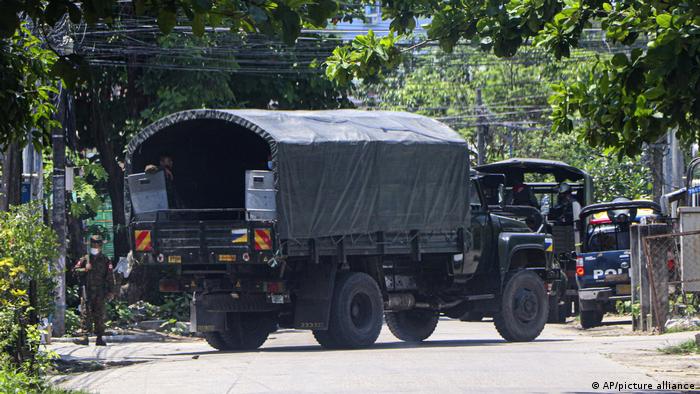 Authorities in Myanmar are trying to suppress anti-coup protests

Myanmar authorities have arrested a Japanese journalist in the city of Yangon, with Tokyo on Monday calling for his immediate release.

The reporter, identified by Japanese media as Yuki Kitazumi, was already detained before while covering pro-democracy protests that broke out in Myanmar after the military ousted the elected government on February 1.

What we know about the arrest

Kitazumi was arrested by troops at his home in Yangon on Sunday evening, according to witnesses quoted by Japanese public broadcaster NHK.

A Japanese Embassy spokesperson said that Kitazumi was transferred overnight from a police watchhouse to the Insein prison. Insein is known as a place for holding political prisoners.

The journalist, a freelancer in Yangon, was formerly a Nikkei business newspaper reporter.

He was previously arrested in February but released soon after.

Japan's Kyodo News agency reported that he was arrested on suspicion of spreading "fake news."

How did Japan react?

Chief Cabinet Secretary Katsunobu Kato told reporters that the Japanese government wants explanations for the arrest of Kitazumi, and has called for his release as soon as possible.

"We will continue asking the Myanmar side for his early release, while doing our utmost for the protection of the Japanese citizens in that country," he said.

Although Japan has recently leveled more criticism at Myanmar for its treatment of opposition protesters, it has so far refrained from measures such as imposing sanctions on members of the military junta, as the United States and other countries have done.

What is the civil liberties situation in Myanmar?

More than 3,000 people, including ousted civilian leader Aung Saan Suu Kyi, remain in custody in Myanmar after being arrested since the February coup, according to the group Assistance Association for Political Prisoners.

At least 34 journalists and photographers are still in detention across Myanmar, according to monitoring group Reporting ASEAN.