Myanmar: Save the Children slams junta for 'intolerable' killing of two workers

Charity Save the Children confirmed that its two missing staff were caught up in an attack that killed at least 35. US Secretary of State Antony Blinken renewed calls for the UN to impose an arms embargo in Myanmar. 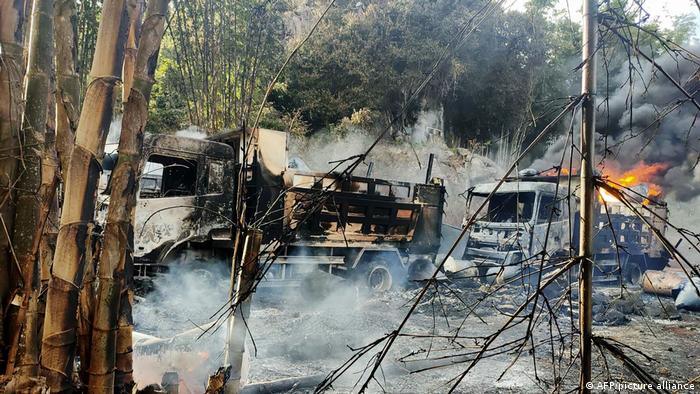 At least 35 people, among them Save the Children aid workers, died when junta forces allegedly attacked vehicles in Kayah state, Myanmar

Two Save the Children staff were among at least 35 people allegedly killed by military junta troops in eastern Myanmar, the humanitarian organization said Tuesday.

Pro-democracy rebels found charred remains of aid workers and civilians on a highway in Kayah state where they have been fighting forces that seized power in a February coup.

What did the charity say?

"This news is absolutely horrifying," Save the Children CEO Inger Ashing said on Tuesday. "Violence against innocent civilians including aid workers is intolerable, and this senseless attack is a breach of international humanitarian law.

"We are shaken by the violence carried out against civilians and our staff, who are dedicated humanitarians, supporting millions of children in need across Myanmar," she added.

Myanmar's state media also reported the incident in the town of Mo So, saying soldiers had fired on "terrorists with weapons" but making no mention of civilians or children being involved.

Save the Children said in a statement that the two staff members killed were "both new fathers who were passionate about educating children." They had been returning from helping a nearby community when they were caught up in the attack.

Calls for an arms embargo

Save the Children's Ashing called on the UN Security Council to investigate the incident and its member states to impose an arms embargo on Myanmar. She also asked the UN to limit junta air strikes on towns in the area.

"The targeting of innocent people and humanitarian actors is unacceptable, and the military's widespread atrocities against the people of Burma underscore the urgency of holding its members accountable," US Secretary of State Antony Blinken said on Tuesday, using Myanmar's former official name favored by some of the opposition.  "The international community must do more to advance this goal and prevent the recurrence of atrocities in Burma, including by ending the sale of arms and dual-use technology to the military," he said in a statement.

The calls came after United Nations under-secretary-general Martin Griffiths on Sunday said that he was "horrified" by the reports. He had demanded the Myanmar government carry out an investigation into the incident.

The Save the Children CEO said the Association of South East Asian Nations (ASEAN) should push for "an immediate cessation of violence in Myanmar and for the ASEAN Special Envoy to help mediate a diplomatic solution."

Save the Children, which has a staff of 900 in different locations around Myanmar, pulled out of Kayah state and several other regions after the incident.

Myanmar's military government has attacked a town controlled by rebel militias. The latest airstrikes have forced hundreds of people to flee the country into neighboring Thailand.