Myanmar junta gets in legitimacy row with envoy to UN

Myanmar says it has suspended its envoy to the United Nations, but he insists he should stay in his post. Meanwhile, authorities slammed the ousted president and some detained journalists with new charges. 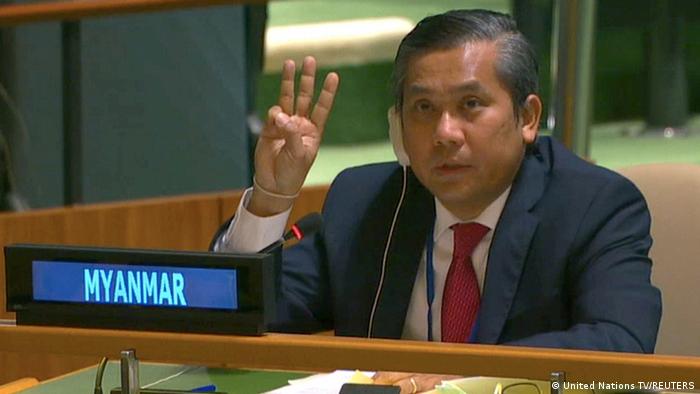 The United Nations said on Tuesday that it has received two "contradictory" letters about Myanmar's representative at the assembly as the junta pushed to suspend the envoy over his anti-coup statement.

The move comes as domestic and international tensions rise over the military coup that ousted Myanmar's elected leadership on February 1.

"We are in a very unique situation we have not seen in a long time," UN spokesman Stephane Dujarric said.  "We are trying to sort through all the legal, protocol and other implications."

The Aung San Suu Kyi-appointed Kyaw Moe Tun had pleaded with the UN to take "the strongest possible action from the international community" to defend democracy in his country.

What did the letters say?

Tun sent a letter on Monday to the General Assembly President Volkan Bozkir defending his position.

He wrote that he was appointed by President Win Myint "who was then and remains the lawfully elected president of Myanmar."

"I wish, therefore, to confirm to you that I remain Myanmar's permanent representative to the United Nations," Tun said in the letter.

Myanmar's Ministry of Foreign Affairs addressed the UN in a separate letter, stating that it had "terminated the duties and responsibilities" of Tun.

Why is the military firing the ambassador?

Tun had urged the international community to condemn the coup.

"It is time for the military to immediately relinquish power and release those detained," Tun said in a speech during a General Assembly meeting on Myanmar.

His speech received applause from his counterparts at the assembly. The US Ambassador Linda Thomas-Greenfield said she "commended him for his courageous statement."

What are the UN rules on such conflict?

The General Assembly rules of procedure stipulate that a head of state or a foreign minister appoints their country's envoy to the UN.

The letter Myanmar sent to Guterres on Tuesday was an unsigned note verbale. While Tun said in his letter that Suu Kyi appointed him last year, making him the legitimate envoy.

In 2011, the General Assembly approved Libya's request to accredit the envoys from the country's interim government. But that decision only came after the US, Russia, China and European states had all recognized the new authorities.

What is the latest on Myanmar's unrest?

Myanmar's ousted President Win Myint is facing two new charges, including a breach of the constitution that is punishable by up to three years in prison, his lawyer told Reuters on Wednesday.

Authorities also charged the Associated Press (AP) reporter Thein Zaw and five other journalists with violating a public order law, according to AP.

Security forces reportedly killed at least two protesters at a rally against the Myanmar military coup in the country's second city of Mandalay on Wednesday.

The crackdown on protesters have killed more than 18 people since early February.