For the first time since the country began its rash political transition, the Myanmar Journalism Institute (MJI) will be offering a professional training program for journalists – with support from DW Akademie. 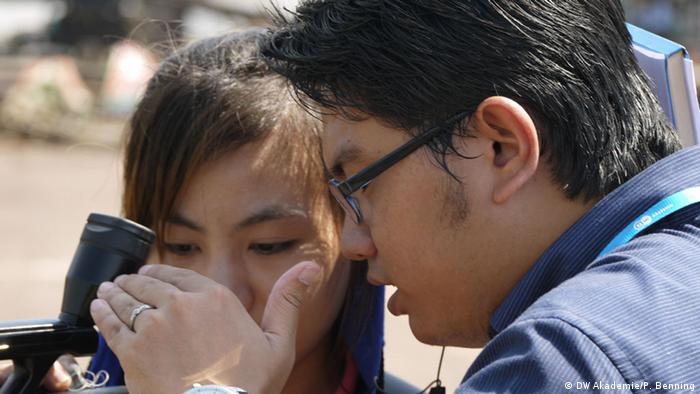 It's a milestone for Myanmar's media sector: the Myanmar Journalism Institute (MJI) was launched in early May, just a day after celebrations for the World Press Freedom Day. It is the country's first private journalism school in more than 50 years.

DW Akademie is a member of an international consortium that has been involved in establishing the institute. Other members include Canal France International (France), the Fojo Media Institute (Sweden), the Forever Group (Myanmar) and UNESCO. The project got underway in August 2013.

Myanmar began opening its media sector in 2012. Censorship was largely abolished one year later after being in full force for almost 50 years.

There has since been a dire need for professional journalism training. Countless media houses and news outlets sprung up after the country began its transition, but well-trained journalists have been in short supply and positions mainly filled by young and inexperienced colleagues.
"New press laws are presenting journalists with challenges as well as new freedoms, and so ethical standards aren’t always a priority," says Isabella Kurkowski, DW Akademie's project manager in Myanmar.
The newly-founded Myanmar Journalism Institute will be closing this professional gap. Starting in Summer 2014 a one-year journalism degree program will be training journalists to meet international standards, concentrating on both theoretical and hands-on elements. DW Akademie is supporting the MJI in developing a curriculum, introducing e-learning platforms and assisting in implementing technical equipment. DW Akademie trainers will also be teaching courses and coaching the institute's managers.

Myanmar: School of journalism in the making

Germany's Federal President Joachim Gauck has praised DW Akademie's efforts to set up a much-needed journalism school in Myanmar. He referred to the project in a speech given this week at Yangon University. (11.02.2014)