Thirty-seven members of Myanmar's opposition National League for Democracy have been sworn in as members of parliament after they dropped a dispute over the wording of their oath of office. 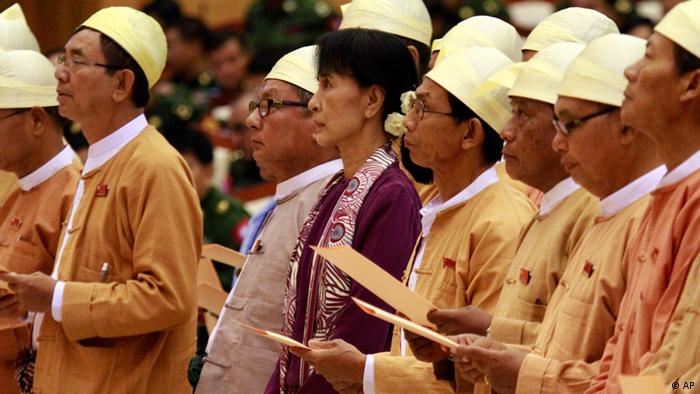 Myanmar's democracy icon Aung San Suu Kyi was sworn in to office at Myanmar's parliament on Wednesday along with more than three dozen of her party colleagues, after backing down on a request that the oath of office be modified.

Suu Kyi's National League for Democracy (NLD) party had disputed the oath to "safeguard" the military-imposed constitution, instead wanting to use the word "respect." The party dropped the argument on Monday after it became clear President Thein Sein's government was unlikely to yield.

"The reason we accept (the oath), firstly is the desire of the people. Our voters voted for us because they want to see us in parliament," Suu Kyi said. "We have always believed in being flexible throughout the years of our struggle."

The 66-year-old Nobel Peace Prize laureate has pledged to seek an amendment to the 2008 constitution, which reserves a quarter of parliamentary seats for unelected military officials. Such an amendment would require three quarters of the votes in the legislature, meaning the military would have to go along with the plan.

The swearing-in of 37 NLD members comes a day after a visit from UN Secretary General Ban Ki-moon, who praised the Suu Kyi's "flexibility for the greater cause of the people, for country." A total of 43 NLD members were elected in April 1 by-elections.