Mussorgsky and Rimsky - a fruitful friendship

Modest Mussorgsky was born 175 years ago, and Nikolai Rimsky-Korsakov 170 years ago. The two composers were contemporaries and companions, but also opposites. Their friendship: a stroke of good fortune for music lovers.

The famous work "Moscow-Petushki" by Venedikt Erofeev - a prose poem that takes up alcoholism in Russia, among other things - contains an episode that has come to enjoy cult status among the country's intellectuals.

"It's as funny as it is sad," one passage reads. "Modest Mussorgsky is lying completely drunk in a roadside ditch one day as Nikolai Rimsky-Korsakov passes by in a tuxedo, holding a bamboo stick. Nikolai stops, tickles Modest with his stick and says, 'Get up, you pig! Clean yourself up and get back to work on your brilliant opera 'Khovanshchina!'"

The little passage is on to something when it comes to the two composers' relationship, and things could have transpired exactly as Erofeev described.

A mutual passion for music

The two composers' birthdays didn't come far apart. Modest Mussorgsky was born on March 21, 1839, and Nikolai Rimsky-Korsakov on March 18, 1844. Since Mussorgsky's birthday was recorded as the date of his baptism, he may even have been born on the same day as his musical counterpart - five years earlier. 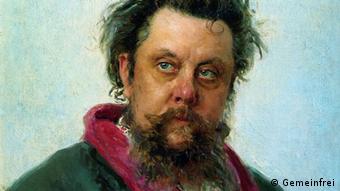 Otherwise, the two have striking similarities in their life stories. Both were born north of Saint Petersburg on their families' land: Mussorgsky near Pskov, and Rimsky-Korsakov near Novgorod. The two cities are less than 200 kilometers apart (125 miles). Both were from noble families that had fallen into dire straits, so the two young men had to find ways to support themselves early on. They followed in their forefathers' footsteps and joined the army - Mussorgsky to the Russian Guards, Rimsky-Korsakov to the Marines.

Along the way, both men's original plans were halted by a passion for music.

The two musicians finally met thanks to pianist and fellow composer Mily Alexeyevich Balakirev, founder and leader of an artist collective known as "The Five" or "The Mighty Handful." They called themselves "Novatoren," innovators, and their goal was to create musical art forms rooted in nationalism.

The group's members had intensive exchanges daily. Mussorgsky and Rimsky even shared a small apartment - and a piano - in Saint Petersburg. "It was on mutual agreement that we never disturbed each other," Rimsky-Korsakov later recalled. "Modest used the instrument until noon, during which time I worked on scores. Afterwards, he had to go in for his service at the ministry - he earned his living as a bureaucrat - and I had the piano all to myself."

Another member of the artist circle was composer Alexander Borodin, who described the situation as such: "Ever since Modinka and Korsinka started sharing a room, they've complemented each another - regardless of how antithetical their approaches to music may have been. Modeste has improved the recitative and declamatory sides of Korsinka who has, in his turn, wiped out Modeste's tendency towards awkward originality. Their relationship went on completely without greed, vanity and jealousy of the other's success." 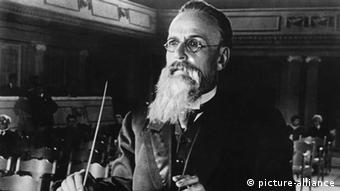 But soon that idyllic life came to an end, and the two went separate ways. Rimsky-Korsakov became a professional musician. As a professor at the first Russian conservatory in Saint Petersburg, he trained the next generation of composers, including Glazunov, Stravinsky and Prokofiev. He headed a model family, becoming the father of seven children. Mussorgsky teased his friend as having become a "bourgeois music official."

Rimsky-Korsakov died in 1908 at the age of 64, the author of 15 operas and countless instrumental works. In his role as a musical patriarch, he helped established the global fame of Russian music.

Mussorgsky's life took very different turns. After parting ways with Rimsky, he turned to the ostensible sweetness of the bohemian lifestyle. Remaining single, he drank more and more and worked only in his seldom moments of lucidity. Catastrophe struck soon on March 28, 1881, when the composer died at a mere 42 years of age due to his alcohol dependency.

After his death, Rimsky-Korsakov mourned his close friend, but also angrily vented against his "self-destruction." 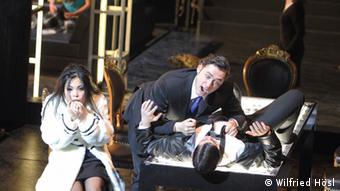 After Mussorgsky's death, reception of his work was restricted to a single major piece, the opera "Boris Godunov," along with a couple of vocal works and the iconic "Pictures at an Exhibition." The remaining fruits of his creative labor remained in obscurity. Only a few friends know of the early opera "Salammbo," the chamber opera "Mozart and Salieri" or the majestic torso of the uncompleted central work "Khovanshchina."

What Nikolai Rimsky-Korsakov managed in the 27 years after the death of his friend may have been a unique experiment in the history of music. Drawing on smeared scraps of paper, loose sketches, fragments and drafts - many of which were difficult to classify - he created the great Mussorgsky that the world knows today. After all, the surviving composer regarded his colleague and companion as the greatest genius in Russian national music - greater and more original than himself.

He completed Mussorgsky's work, orchestrated the pieces, worked to get them published and organized performances. For nearly three decades and with hardly a day's break, Rimsky-Korsakov was engaged with his friend's work. Just days before his own death, he was writing the orchestration for fragments of the crowning scene in "Boris Gudonov," slated for premiere in Paris under the Russian impresario Sergei Diaghilev.

Bringing classical music back to schools

Coming to German schools this fall: a music education event of unprecedented proportions, centered on Antonin Dvorak. German public broadcasters are teaming up for a series of workshops, events and one special concert. (19.03.2014)

March 8 marks the 300th anniversary of the birth of Carl Philipp Emanuel Bach, son of the renowned Johann Sebastian Bach. C.P.E. Bach became one of the most important and famous composers of the 18th century. (08.03.2014)